On April 23, 2019, we had the opportunity to visit the Barsalgho camp which is 3km from the town of Barshalgo and 48km from Kaya, in north-central Burkina Faso. This camp was set up following the various displacements due to the insecurity since the end of 2018-beginning of 2019. The camp shelters 1388 people, all of Fulani ethnic group. More than half are children (between 700 and 800) aged 0 to 18, then come women and finally men in terms of categorization. The site has 83 tents for the displaced and 8 for the administration (health, security, administration and psycho-social). The camp was installed on 9 January 2019. Before the camp was set up, the displaced were settled in the town hall.

In terms of infrastructure, the camp has a health service that was run by MSF for three months and now the management belongs to the Ministry of Health, two elementary preparatory classes and a child-friendly space, toilets, latrines and showers, two boreholes (200m and 500m from the camp) and a bladder of 10,000m3 made by the Ministry of Humanitarian Affairs and partners, and finally the PAM storage.

Aly Tapsoba, the camp administrator, gave us a tour of the camp and expressed the difficulties they face. "The emergency must not exceed 3 months, but today the situation is getting worse. The ministry was helping well, but not anymore. Shelters do not stand up to the wind. 11 tents jumped because of strong winds. There is a lot of promiscuity in the tents: tents of 20m2 can comprise between 6 to 10 households. NFIs and psychosocial support are needed for women and children. These displaced people need beans and millet, because it is their staple diet and not the pasta that we distribute to them, unless we teach them how to eat it."

About 4100 people live outside the camp to preserve calm because all the displaced people living in Barsalgho come from two communities that do not get along. This explains why the Mossi people live in host families and Fulanis on the Barsalgho camp. During distributions, the Mossis come to take their part. Upon arrival, we found that a distribution was preparing for the next day, in fact 17 tons of food would be distributed to 5488 people. 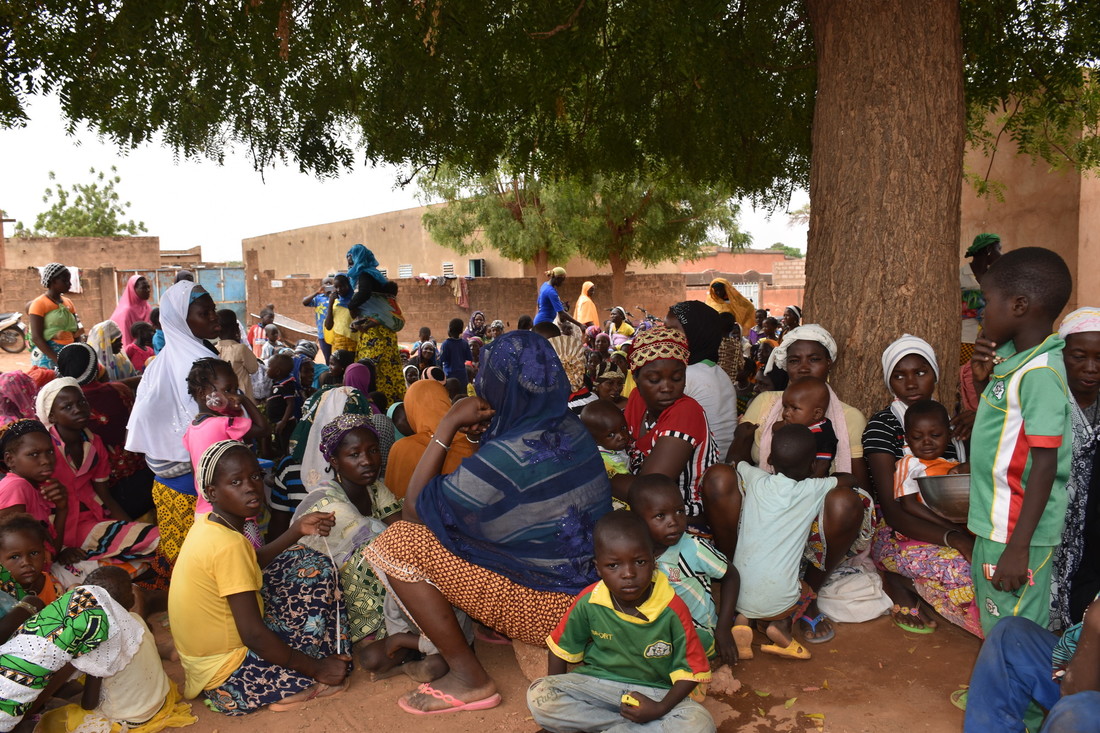 Djenaba Diallo, 60, is from Sagou. She has six daughters and three sons. Unfortunately, two died during the attack. They all live with her, along with her 40 grandchildren, in a 20m2 tent. She has been living on the camp since 1 January 2019. She had to flee her village after the attack in December 2018.

In Sagou, Djenaba owned cattle of more than 50 heads of goats and sheep. Thanks to that, she sold milk as her small business. "I lost everything during the attack and I still have family members who are in the bush with the cattle. They had gone to feed them when we were attacked and we do not know where they are. We worry about them."

The most ardent wish of Djenaba is the return to peace and calm. "We must remove the weapons from the attackers. My grandchildren are in the bush risking their lives. If there are no more attacks, we can find them and join them."

In addition to being reunited, Djenaba wants to have something to eat and a better shelter. "We are almost 50 under my tent, this does not allow us to live well and we can easily get infected in case of illness. We do not eat our hunger out, we need help."

Djenaba is not alone in this situation. We also exchanged with Dicko Adama to know a little more about him.

Dicko, 55, is a shepherd and farmer who comes from Kassai. Father of a son and a daughter, he lost his only son during the attack on their village. "My son was guarding the flock when he got shot. He is survived by 7 children and his wife. I take care of them and they live with me too. We cannot eat our hunger out and our tent was destroyed by the wind. I worry because the rainy season is fast approaching."

Dicko wishes for peace to reign but before that he wants to understand why so much hatred. "I mourn my son every day, he did not deserve that. Why take up arms and kill each other? Today we are suffering because we have lost all. We are tired of reaching out our hands, we need to work and provide for ourselves and our families."

The situation in Burkina Faso is not about to improve. On the same day, we had more than 4300 displaced people in a town not far from Barsalgho. Much remains to be done and we are urging the assistance of these displaced people to at least put an end to their trauma.