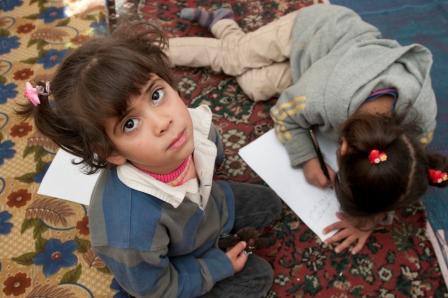 Hear the voices of Syrian refugees, read our latest stories 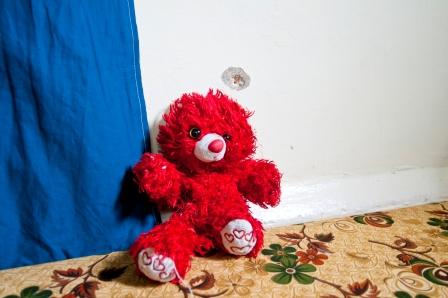 If you had to leave your home behind, what would you take? 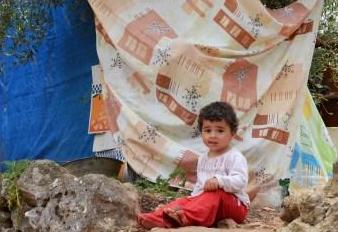 Donate now - and help us assisting Syrian refugees in need

As the Syrian crisis entered its 9th year in March 2019, CARE remains gravely concerned about the impact of the conflict on civilians, who continue to pay a heavy price. On average, over 150 Syrians are killed on a daily basis. Civilians are targeted, displaced and are living in dire conditions in besieged areas with grave humanitarian needs. The Syrian conflict has triggered the largest displacement crisis in the world with 6.2 million internally displaced. Of the estimated 11.7 million people in need of humanitarian assistance across Syria, 5 million people are experiencing acute needs.

At the same time, neighboring countries such as Jordan, Lebanon, Egypt, Turkey, Iraq continue to feel the burden of hosting around 5.6 million refugees. CARE is particularly concerned about the plight of women and children who are most vulnerable during crises and displacements.

For an overview of the crisis, download our Syria crisis factsheet and CARE's impact numbers.

We need your help. Any donation, no matter how small, will help us reach and support the most vulnerable, caught up in the biggest humanitarian crisis of the 21st century. Click here to find all the CARE members and their donation pages.

How is CARE responding?

CARE is working with host country governments, the United Nations, and international and local organizations to help refugees and host communities meet their most urgent needs and protect their dignity. CARE is providing life-saving and education services to Syrian refugees inside Syria and in Jordan, Lebanon, Egypt, Turkey, Iraq and the Balkans. CARE is an impartial and neutral organization. Our support to families affected by the crisis in Syria is based on humanitarian needs alone, no matter which religion, political affiliation or ethnicity people belong to.

CARE responds to the crisis inside Syria through a network of local partners. CARE’s response in Syria includes support for food security and the re-establishment of livelihoods options. We are helping providing reproductive, primary care and maternal health, as well as shelter, clean water and proper sanitation, mainly by distributing relief supplies and multi-purpose cash vouchers for food as well as hygiene and baby kits, dignity kits for the elderly and sanitary products which at times of emergency are among the most important items people need to carry on daily activities such as cooking, carrying water or washing their hands.

CARE has reached more than 4.7 million people in Syria since 2014.

Today, Turkey is home to the highest number of Syrian refugees in the world: more than 3.6 million registered refugees. Following the huge influx of Syrian refugees in fall 2014, CARE began its refugee response inside Turkey.  After years of displacement, refugee families in Turkey remain highly vulnerable; assessments have found that nearly 12% of Syrian refugees continue to live in extreme poverty, and 59% in moderate poverty.  CARE remains focused on empowering refugees in the southeast of Turkey.  In response to ongoing needs in the South East of Turkey, CARE has been responding with protection, shelter, and livelihood programming for vulnerable Syrian refugees, with a specific focus on women and girls. Refugees living in urban areas, over 95% of the refugees in Turkey, face several challenges and barriers which limit their ability to earn enough income to meet their basic needs.  As a result, they are resorting to negative coping mechanisms such as early marriage, child labor and reduction of meals. In order to address these needs, CARE has undertaken a comprehensive approach to protection programming in southeastern Turkey through disseminating protection information, providing legal assistance and managing vulnerable cases.

Through our shelter programming, we provide a household specific, tailored response to vulnerable refugees with the aim of addressing poor housing conditions and the built environment.  CARE is responding by improving safety, dignity and privacy for vulnerable refugees and host community members by intervening to rehabilitate shelter, upgrading buildings, and communal community spaces.

CARE has also expanded its livelihood programing and social integration efforts in the southeast of Turkey. We are supporting the capacity building and improving workforce preparedness of vulnerable Syrian and Turkish women. CARE works in partnership with female participants in developing their capacities through Turkish Language Training and Women's Economic Empowerment programming.

Since the beginning of our response in 2014, CARE has reached over 275, 400 Syrian refugees to meet their needs. During 2018, CARE in Turkey reached over 144,000 refugees in our four target provinces; Gaziantep, Kilis, Hatay and Sanliurfa; 106, 380 were reached through our protection programming, 34,326 through our shelter programming, and 499 through our livelihoods programming.

It is estimated that the country hosts 1.5 million Syrian refugees[i] who have fled their country’s conflict since 2011, resulting in the largest concentration of refugees per capita and the fourth largest refugee population in the world. One in four in Lebanon is a refugee.

In Lebanon, CARE meets refugees’ and host communities’ most basic and pressing needs by providing water and distributing sanitary items, such as soap and hygiene products for women, as well as relief items such as mattresses, blankets, kitchen sets and water containers to newly arrived families. We provide cash assistance to the affected populations in the areas of Mount, Beirut and North Lebanon. Shelter rehabilitation and protection services, which include the improvement of drainage systems and the provision of hygiene sessions. CARE also works with municipalities to improve water supply and sanitation infrastructure. CARE in Lebanon has developed an urban specific community based approach to improve the living conditions of vulnerable refugee and host communities. The Neighborhood Approach focuses on improvements to whole buildings and streets, communal spaces, rather than solely rehabilitation of individual family units.

In the winter, CARE has helped families in Mount and North Lebanon regions to prepare for and cope with the cold winter, distributing cash for heaters and fuel, blankets and floor mats. CARE has reached over 400,000 people in need in Lebanon, since it began responding to the Syria crisis in 2013.

Read here our factsheet about CARE's work in the Lebanon.

Jordan has historically been affected by multiple refugee crises – it has the second highest share of refugees compared to its population in the world[ii]. It is estimated that the total number of Syrian refugees in the country is more than 1.3 million[iii] even though only some 670 thousand are registered with UNHCR. We are working to meet the needs of poor farmers, women and refugees, all affected by conflict, economic disparity, discrimination or a fragile resource base.

In Jordan, CARE is operates through community centers in five cities – Amman, Irbid, Mafraq, Zarqa and Azraq town, where the majority of Syrian refugees live. In Azraq camp, CARE manages all four community centers and offers information to refugees as they arrive in the camp. The centers also serve as the main point of contact where refugees can report complaints or feedback and there they can also find a variety of recreational and psychosocial activities for women, men and children. CARE also identifies community representatives and organizes refugee committees giving them a voice in camp decision making.

Read here our factsheet about CARE's work in the Azraq camp.

In urban areas, CARE’s community centers are replicated to reach as many vulnerable Syrian refugees as possible with much needed humanitarian aid and services. We provide emergency cash assistance to pay for basic living costs, including rent, food, health services and essential household items, conditional cash assistance for education and cash assistance for health and shelter. CARE also assists with vital information on how refugees can access further health, legal and social support through case management and referrals.

In addition, we are providing psychosocial assistance to women, men and children helping them to cope with their experience of violence, flight and loss of family and friends. CARE has helped families in Jordan to cope during the cold winter, distributing cash to buy heaters, blankets and fuel refills to refugees. As host communities have also been severely impacted by increased accommodation and living costs, CARE works with most vulnerable host families to address their needs and help them become resilient through livelihood support and vocational activities.

In 2018, CARE benefited 217,800 Syrian refugees, 17,796 refugees from other nationalities, as well as 22,812 Jordanians. More than half of those are women and girls. Since the beginning of the Syria Crisis, CARE Jordan has supported some 600,000 refugees.

CARE in Iraq works in Dohuk Governorate, in Ninewa Governorate and in the region of Fallujah, in Anbar Governorate. CARE responds to humanitarian needs and supports long-term recovery and reconstruction efforts. CARE also works with local Iraqi organizations to provide multi-purpose cash assistance, developing and maintaining clean water supply system and hygiene promotion. We rehabilitate and equip public health centers with medical equipment and supplies and we provide nutritional and educational services to pregnant women and new mothers. We also work to enhance the resilience of vulnerable host communities and sustainable reintegration of returnees through livelihoods activities. Since the beginning of the crisis, CARE has reached more than 300,000 people in need.

Currently, there are some 130,000 Syrian refugees registered in Egypt, but it is estimated that 500 thousand Syrians remain unregistered[iv] or under alternative legal frameworks. Syrian refugees are living in an urban settings among Egyptian communities across the country. Among refugees in Egypt, women and girls, boys, adolescents and youth, the elderly, unaccompanied and separated children and persons with disabilities face disproportionate risks.

CARE raises awareness among the refugees of sexual exploitation and other forms of gender-based violence to protect them from any form of abuse and raise awareness for legal regulations in Egypt in regards to violence. CARE also offers legal assistance to individual cases.

In collaboration with different partners and specialists CARE empowers family members to oppose harmful practice and conducts special sessions on child abuse for children and parents.

CARE also assists refugees coping with their trauma through psychosocial programs and phone helplines for women and men who have faced gender-based violence. Psychosocial support can be in the form of therapy sessions and support groups as well as through creative approaches such as arts therapy, drama and sports activities. Additionally, CARE’s four women friendly spaces in Cairo and Alexandria have proven effective hubs, raising awareness of SGBV, and benefiting refugees educationally and recreationally, enabling them to temporarily escape life’s struggles while creating greater bonds among refugee families. In 2018, CARE reached more than 11,000 people in need.