Living through displacement during the COVID-19 pandemic 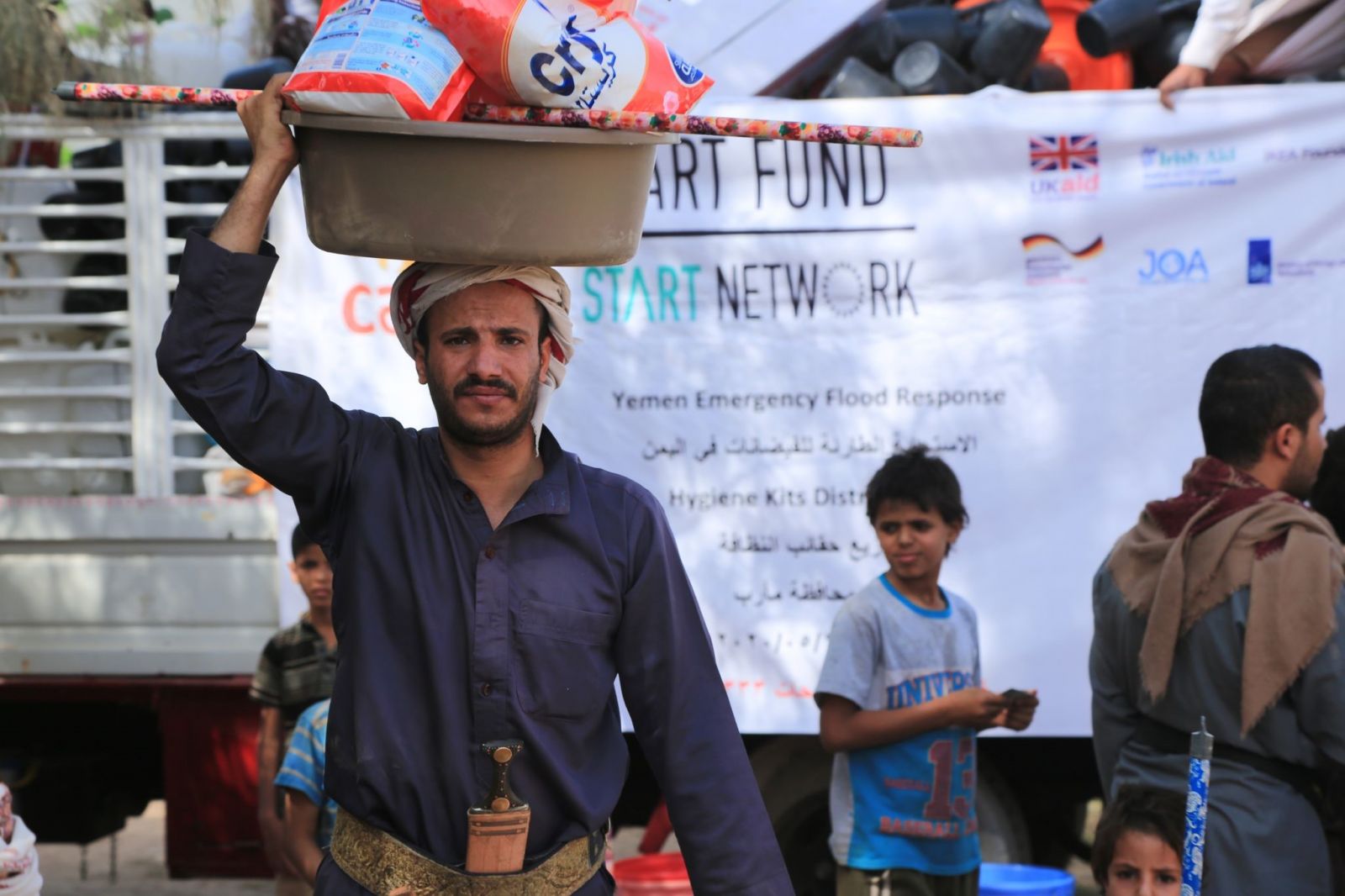 Photo: Saleh at the distribution site

In Yemen, 24.3 million people, about 80% of the population, need some form of humanitarian aid and protection. Five years of conflict have left the country with the fourth-largest number of internally displaced persons (IDPs) in the world. A total of 3.6 million Yemenis were forced to flee their homes in search of safety, 75% of whom are women and girls.

On top of the cumulative effects of years of conflict as well as displacement, economic collapse and disease outbreaks, deadly COVID-19 has been present in the country since April, exacerbating the existing vulnerability of Yemeni families particularly displacement sites.

The escalation of fighting in Al Jawf, Nihm, and Al Bayda governorates, as well as unprecedented floods, have increased the numbers of people moving into Marib governorate. A lack of adequate resources and overcrowding in IDP camps make COVID-19 prevention measures such as isolation, physical distancing and regular hand-washing very difficult.

Minin Al Hadd camp is one of 130 displacement sites in Marib governorate that suffers from a dire lack of basic services including health, water, sanitation, and hygiene. Large amounts of rubbish scattered around the camp and an open sewer expose people to health risks; electricity isn't stable, and water is often unavailable due to frequent breakdowns of the water well’s pumping system. The camp is far from Al Ashraf district centre, where there is a market and health facility, which reduces IDPs’ access to basic services and jobs.

Photo: Mohsen receives his hygiene kit with the help of CARE staff

Despite their four-decade age difference, Saleh and Mohsen share many similarities. Both had peaceful lives before being forced to flee their hometowns, and now both are refugees in their own country, displaced to Minin Al Hadd camp.

Thirty-year-old Saleh was a student in the faculty of commerce at Sana'a University. He was very ambitious about completing his studies in economics and political science, but his ambition was crushed when his elder brother joined the fighting and Saleh and his younger brother had no choice but to flee.

Seventy-year-old Mohsen had a flourishing farm in the Nihm district of Sana’a governorate where he spent his life working and raising his children and grandchildren. When the fighting escalated in Nihm, Mohsen was afraid his son would be arrested, so the family had to leave their comfortable life behind and start over as IDPs. “I had a graceful life,” says Mohsen. “But since I left my farm, I feel rootless and dead inside – like a giant tree that has been uprooted from the land.

"Even before COVID-19,” he says, “I used to stay at home because I couldn’t find a job. I looked for work everywhere, but people kept saying I’m too old to work. Mohsen takes care of his five grandchildren, two boys and three girls, and worries for their safety. “I tell my grandchildren to stay at home because I’m anxious they may fall into the open sewer, which many livestock have fallen into. One little boy fell in but thankfully he was rescued.”

Speaking about COVID-19 prevention Saleh says: “Here, it’s hard to apply basic hygiene practices. People lack water and soap and they can’t stay at home because they need to work and provide for their families regardless of the virus. Movement restrictions have already affected businesses. I’m afraid if COVID-19 spreads further, we won’t be able to meet our basic needs.” 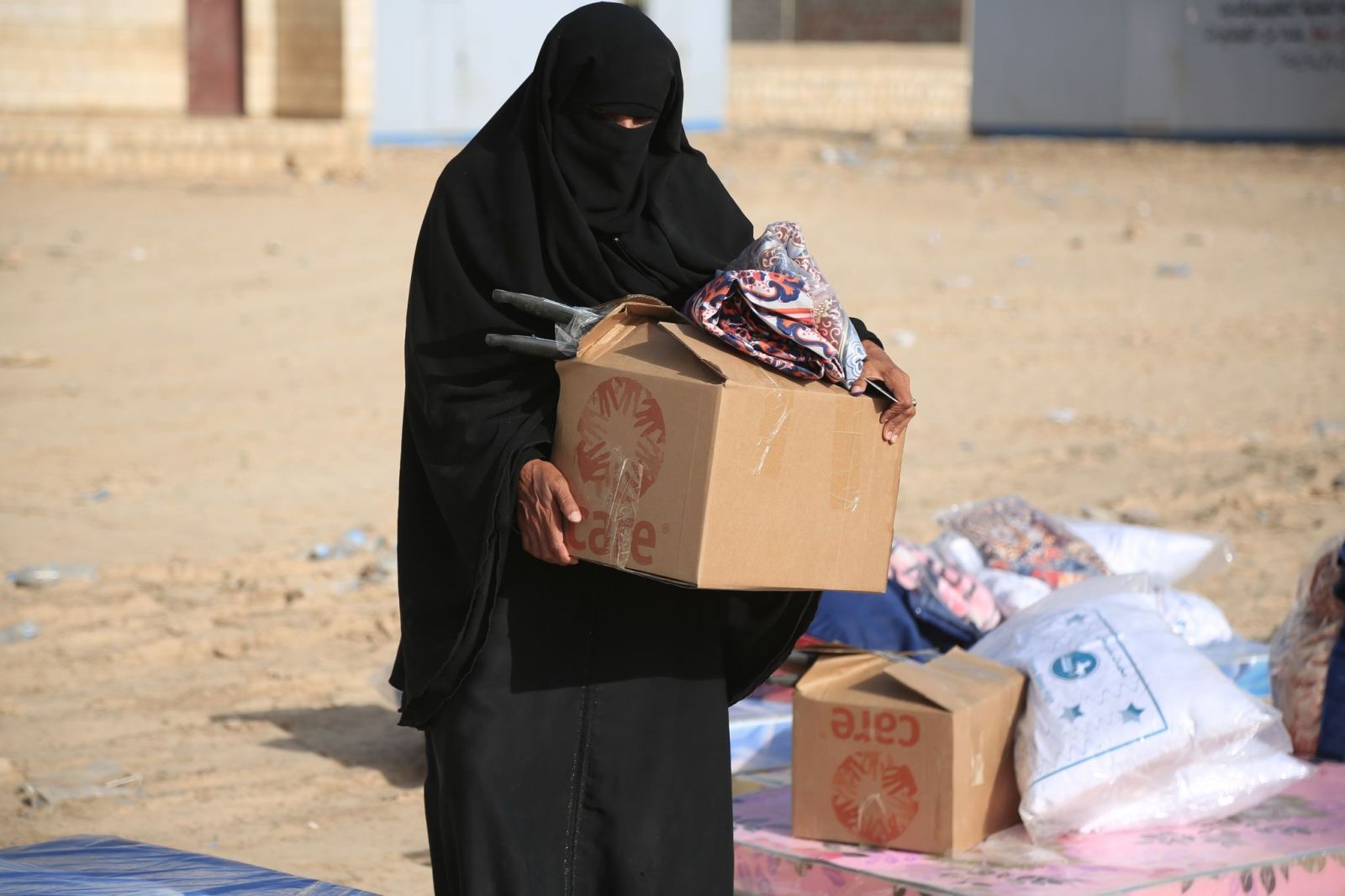 When the WASH cluster identified a critical gap in providing hygiene kits in Manin Al Hadd camp, CARE rapidly began to distribute hygiene kits in the camp, with funding from START Fund. The intervention also provided non-food items (NFIs) and unconditional cash aid for flood-affected families in the governorate.

The kits were appreciated by the displaced families: “Simple but very effective,” says Saleh. “The kit contains basic items such as washing and bathing soap, toothpaste, jerrycans, and plastic pails. It helps in mitigating the spread of cholera, COVID-19, and other hygiene-related diseases among IDPs in the camp.”

“CARE is the first organisation that provided household hygiene essentials to the IDPs in the camp,” says Mohsen. “We hope organisations pay more attention to our camp.” Like all displaced people, Mohsen and Saleh share the same hope – that the war will end and life will go back normal.