A Mother’s Cry: “I must survive for my children to survive”

With worry in her eyes, Nasteexo bounces her 18-month-old baby boy on her lap to keep him from crying. She gazes down at him as he rests on her eight-month pregnant belly, and wonders how she’s going to keep them from going hungry.

“The drought took everything from me,” Nasteexo says. “It took my livestock, my home, our food, water and my husband.”

The drought killed almost all of their 100 goats. These goats were the family’s lifeline. They provided food, milk and income. Without livestock, Nasteexo’s family has no food or money and most alarmingly, they could not find water.

Nasteexo has a total of seven children with one on the way. Two of her children are from a previous marriage. After the drought took their livelihood, her current husband said he could not afford to care for all the children, particularly those who were not biologically his. Nasteexo could not just let her children die, so she took her four-year-old daughter and the two youngest sons and traveled to the nearest town of Bosaso. Here, she hoped to find food and clean water for herself and her children before it was too late. 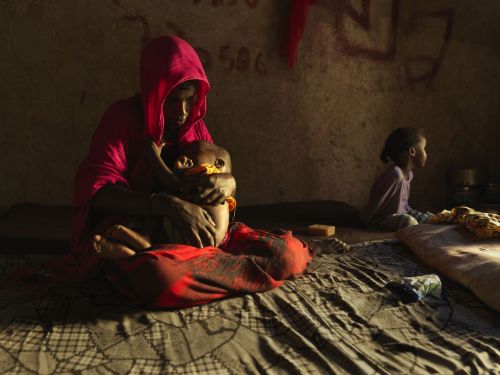 Nasteexo and her son in Displaced Peoples Camp in Bosaso, northern Somalia

Since arriving in Bosaso three months ago, it has not been easy for Nasteexo. Being eight months pregnant, she is unable to work, so she looks to neighbors, relatives and aid groups, like CARE to help her find food.

“Before the drought, we ate two solid meals per day,” said Nasteexo. “Now there are days we don’t eat anything.”

Her youngest son, Abdi, got very sick on their 12-hour journey to Bosaso. He was already suffering from malnutrition and then started having diarrhea. Given that water was so scarce, Nasteexo and the children were consuming whatever water they could find, and it seems they may have consumed dirty water. She was so worried little Abdi may die before they made it to Bosaso.

Upon arrival, Nasteexo found a nutrition center for women and children run by CARE. Here she was able to get emergency nutrition treatment for Abdi and her four-year-old daughter Yasmin, who was also sick.

When Nasteexo arrived at the nutrition center, health workers from CARE first weighed Abdi, measured his height and then the circumference of his arm, which would tell them the level of his malnutrition. Anything under 11cm is considered severely malnourished. Abdi’s arm measured under 10.

Next, the health worker gave little Abdi a sample of Plumpy Nut to test his appetite. Plumpy Nut is a peanut-based nutritional supplement used to treat severely malnourished children. If he was too sick to consume the Plumpy Nut, they would then refer him to the hospital for advanced malnutrition treatment.

Luckily, Abdi was healthy enough that he still had an appetite, so the health workers sent Nasteexo home with a week’s supply of supplements for both Abdi and Yasmin. She was then given directions to come back to the center weekly to monitor the children’s progress and replenish the supply of Plumpy Nut.

The children have been going to the center every week for the past 6 weeks, and Abdi is looking and feeling healthy again. Nasteexo feels relief that her children are getting better, but she still worries about how she will provide for them and keep them from getting sick again.

“I can’t even provide shelter for my children. We are staying with another family for now, but that cannot continue for long,” she said. “For my children to survive, I must survive. It’s a struggle, but I must go on.”