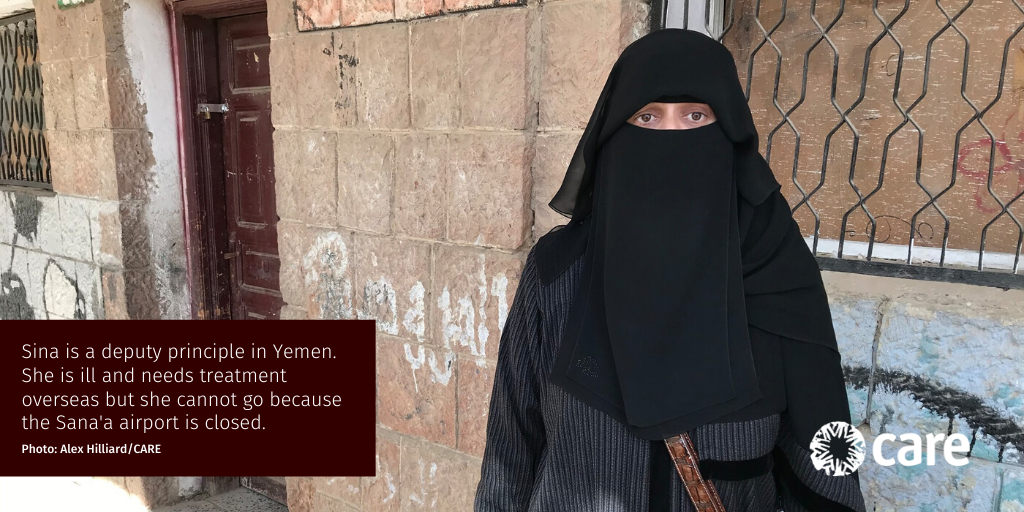 SANA’A, 27 November 2019 – After more than three years of closure, it has been announced that Sana'a International Airport is to be re-opened to allow sick patients to travel overseas for life-saving treatment. In August, CARE & NRC reported that up to 32,000 people may have died through not being able to travel overseas for medical care.

"It has been three long years since Sana'a airport was closed," said Aaron Brent, CARE Yemen's Country Director. "Now we have a very positive signal that parties to the conflict are taking the wellbeing of Yemen's people seriously, and we hope they will follow through on this gesture of goodwill, which could ultimately pave the way for peace."

While opening the airport to medical patients will be a critical first step, the Saudi-led coalition must go one step further and open it up to commercial flights, which will bring in commercial and humanitarian goods and give Yemenis the freedom to travel overseas – something that in most countries is taken for granted.

"As the UN and international organisations have cautioned repeatedly, there is no military solution to the almost five-year conflict in Yemen," said Brent. "Only a truly inclusive political solution will lead to peace, and to the beginning of the end of suffering for millions of men, women & children who have seen their country decimated."

Yemen is in the fifth year of a conflict that has been relentless for the vast majority of the population, with 24 million people in need of humanitarian assistance, including over 7 million women and girls who are in acute need. The economy has collapsed, 3.6 million people have been displaced, and millions are malnourished and at risk of famine.

CARE reaches 1.5 million Yemenis every month, across twelve governorates of Yemen. We provide lifesaving food, cash, water and sanitation services to those in need. As well as our emergency interventions, we work to ensure people have sustainable incomes and community structures like schools, wells and roads; we empower women and young people economically by developing their skills and enabling them to start their own businesses; and we work in reproductive health, ensuring safer childbirth through training midwives and rehabilitating maternity health facilities. CARE has worked in Yemen since 1992. You can find out more about our work here.

Founded in 1945, CARE is a leading humanitarian organization fighting global poverty and providing lifesaving assistance in emergencies. CARE has more than seven decades of experience helping people prepare for disasters, providing lifesaving assistance when a crisis hits, and helping communities recover after the emergency has passed. CARE places special focus on women and children, who are often disproportionately affected by disasters. To learn more, visit www.care-international.org.