“The camps are people’s last resort” Jolien Veldwijk, writes about the devastating situation facing Syrians in the Northeast 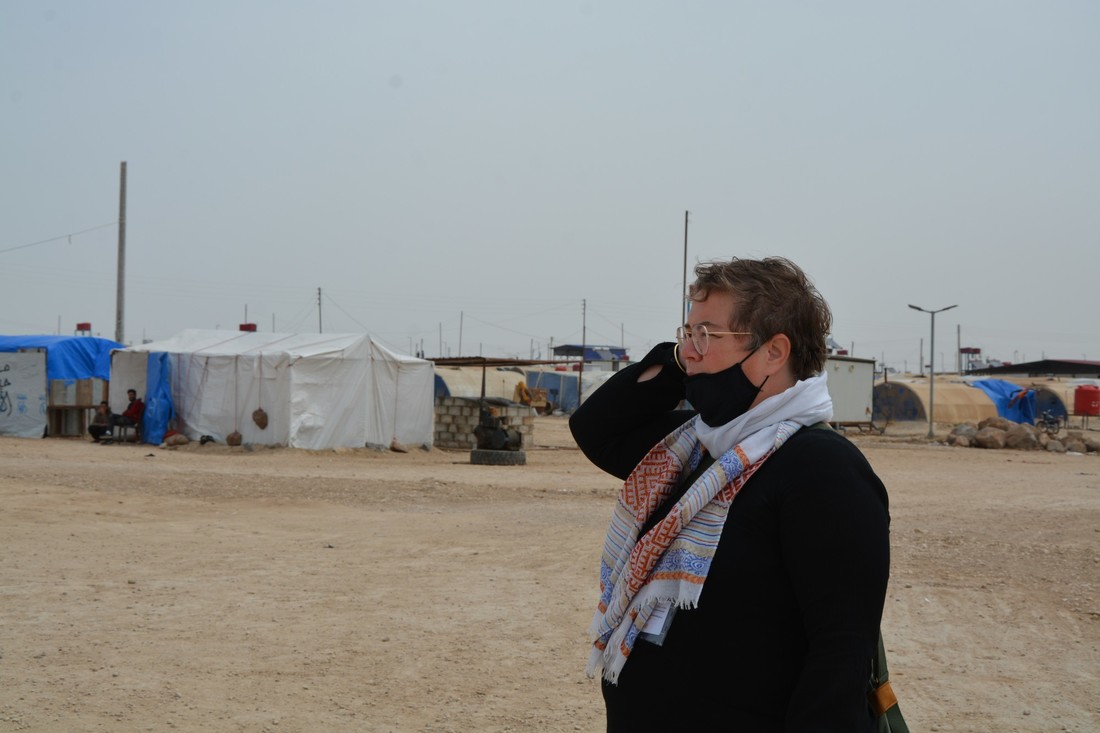 CARE Syria Country Director, Jolien Veldwijk, writes about the devastating situation facing Syrians in the Northeast. In this first blog, she speaks about overcrowded camps, rising temperatures and the deadly threat of COVID-19.

‘People shouldn’t have to live like this. They shouldn’t have to live amidst their own feces, without clean water, without proper sanitation systems, without a quiet place to sleep, and without enough food for their children.’ These are the thoughts that kept going through my mind in the past weeks, when I visited numerous camps in the Northeast of Syria. Yes, people shouldn’t live like this, but they do. Hundreds of thousands of people do in this part of Syria alone.

More than 2.6 million people in Northeast Syria are in urgent need of assistance, but the situation of people in camps is particularly dire. Driving towards these camps through the dry, desert landscape, an ocean of tents is the first thing you see. When you get closer, you see people in worn out clothes, women with jerrycans picking up their small rations of water that are trucked in, children without shoes, green puddles of feces and soap. Already now, in April, the temperature is scorching hot. I cannot imagine how people will be able to manage in July and August.

You see people with distress and pain carved into their faces, telling stories of a decade of raging war. So why would people live here? The answer is simple: They have nowhere else to go. Many people in the camps told me they have been displaced ten, sometimes twenty times. Initially, they had savings, so even when their houses were burnt to the ground and their shops and livelihoods were bombed, they could afford to rent a small flat for their families. Many people also lived with relatives or even strangers, who, themselves poor and affected by the war, opened their doors to those who had become even more destitute than themselves.

But in the last year, the economic crisis and global COVID-19 pandemic have greatly exacerbated the dire situation faced by millions of Syrians. The cost of essential food has risen by an average of 236% over the last 12 months and the value of the Syrian pound has dropped around 40% this year alone. Various COVID-19 restrictions and lockdowns have caused further hardships for people, with reduced employment opportunities.

Aysha, one of the mothers I spoke to, told me how she is sharing a tent with 20 people. “I didn’t know them before, and I feel like we have no more privacy or dignity,” she said. The tents were built for a family of six, but more and more people arrived in the camps. Other women spoke about how they sometimes wait days to get safe drinking water, let alone have enough water to wash their hands.

While I was in Northeast Syria, the COVID-19 cases had risen by 700% – one camp had to be locked down as COVID-19 was rapidly spreading. Social distancing as I know it in my home country, the Netherlands, and quarantine and isolation are all completely impossible in such an environment. While people’s first fear is certainly the war and providing food for their children, they are increasingly scared of the virus. Everyone I spoke to either knew someone who was sick or had been sick themselves.

With no medical care, no doctors, not enough handwashing facilities and face masks, they feel hopeless and helpless, facing yet another deadly threat in their lives.

I’ve worked in various disaster zones over the past decades, including Afghanistan, South Sudan and Yemen. Sometimes, I wonder whether it is possible to get used to seeing so much suffering, man-made horrors and catastrophes. Walking through the camps in Syria, I am reminded that seeing people stripped of almost everything will always be utterly devastating. At the same time, this is also what fuels the motivation for my work. I feel very strongly about doing whatever I can do, so families receive the support they need.

The CARE Syria team has been working hard over the past years to supply people in camps with food, mattresses, blankets, cooking utensils, and clothes. In some camps, CARE is also running community centers, offering recreational and protection activities. Women and children are often especially at risk of violence in camps, and CARE is working with teams on the ground to make sure they feel safe. For the past year, CARE has also set up handwashing stations and provided people with water and sanitation facilities. So yes, despite the widespread destitution, there is a lot we can do to reduce the plight of Syrians.

It is also clear that we are not doing enough. There is an urgent need for a political solution to the ongoing war, but in the meantime, there are so many more people who need our help. As I walk through these camps I feel disappointed and angry about the recent funding cuts, making it even harder to deliver critical assistance to Syrians. I hope that we will be able to turn this funding gap around and can convince rich countries to do their share to support people like Aysha. People, who have been in survival mode for a decade. People who have ended up here, in the overcrowded camps of Northeast Syria, and have nowhere else to go. They cannot expect the least respite and have no future solutions in sight.