How One Congolese Woman is Rebuilding her Life After the Conflict

On a worn wooden chair inside her dimly lit hut, Rosette Charigufi sits down to share her story of life on the outskirts of Goma in the Democratic Republic of Congo. “We had a normal life once,” she says. “It was not always easy ... but it was enough to live.”

In 2009, Rosette’s family was forced to flee their home due to the ongoing Kivu conflict. The conflict began in 2004 between the military of the Democratic Republic of Congo and an armed rebel group, Democratic Forces for the Liberation of Rwanda. According to the UN, the war in Congo has displaced 4.5 million people internally and forced over 800,000 refugees to flee to other African countries.

“The war represents the worst time of my life,” Rosette says. When the fighting reached her village, both Rosette, 45, and her husband were hit with shrapnel in their legs as pieces of rockets and improvised explosive devices (IEDs) were falling nearby. 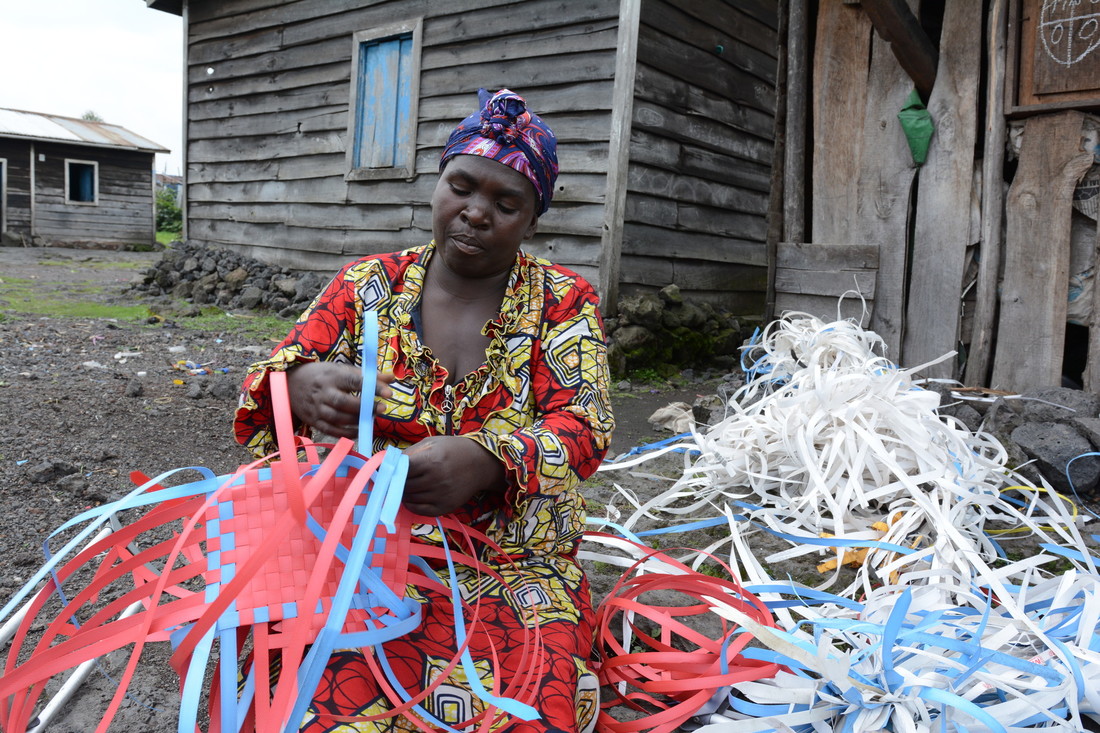 Rosette and her husband fled to a nearby village with three of their five children. For the next two years, they stayed in a camp for internally displaced people. “My oldest son was 12 and took care of his then-8-month-brother all by himself,” she explains. “Later, he carried him and walked all the way to Goma and we were reunited.”  Eventually, the family was resettled in a community on the outskirts of Goma where Rosette now lives.

Rosette spent a year recovering in the hospital from her leg injury, although her movement still isn’t what it used to be. “My biggest challenge is my disability. Since my injury, I haven’t walked properly.”

Life has been difficult. Two years ago, Rosette’s eldest child, a 23-year-old, couldn’t find a job so he joined the Congolese army. She hasn’t heard from since. “I think about him all the time. I worry about him. I don’t even know if he is alive,” she says. “At first it was very difficult. I cried every day and waited for him. Now I’m more used to his absence. If God wants to return him to me, he will one day.”

Rosette, who previously made and sold coal with her husband, has had to find new sources of income after being displaced. Last year, she participated in CARE’s Village Savings and Loan Association. Through it, she receives a loan which she uses to buy threads from Goma. She then weaves large, colorful baskets that sell for less than $1 USD each. Rosette is working to repay the loan and hopes to use the profits to grow her business.

But Rosette isn’t limiting herself to weaving baskets. “I bought two goats with the money I saved from selling baskets, and will continue to grow my herd,” she says.

The profits from these businesses have allowed Rosette to pay for her children’s school fees and spruce up her home. Rosette’s hut gets little light and the floor is rocky, but it’s cozy. The door and windows do not have frames, but drapes hang at the doorway and between the rooms. A few stools and chairs furnish the house. “When I first arrived, [my house] was only a hut with no walls, drapes, or furniture. I have been adding more little by little.”

Rosette is also learning how to read and write. “At first I did not know how to write my name. Now I can recognize my name and I can read a little,” she says. Despite an increase in literacy rates, about one in every three females in the DRC remain illiterate.

Rosette is also learning basic calculations and says it’s supporting her business.  “In the past, I did not know how to calculate properly, and I didn’t understand digits, so when I sold my products in the market I could easily be fooled. Now I know if someone is trying to trick me.”

The literacy classes she is taking have come in handy. Rosette has caught several vendors incorrectly billing her and she has boldly called them out on it.

“I am more confident in myself now,” Rosette says, smiling. “I want to focus on my education and my business, to have a dignified life, and for my children to be educated.” She’s hopeful they will have a better future, despite the challenges that have overshadowed their childhood. “I will no longer worry about their fate.”