South Sudan floods lead to rising child malnutrition: ‘The baby doesn’t have milk and I don’t have money’ 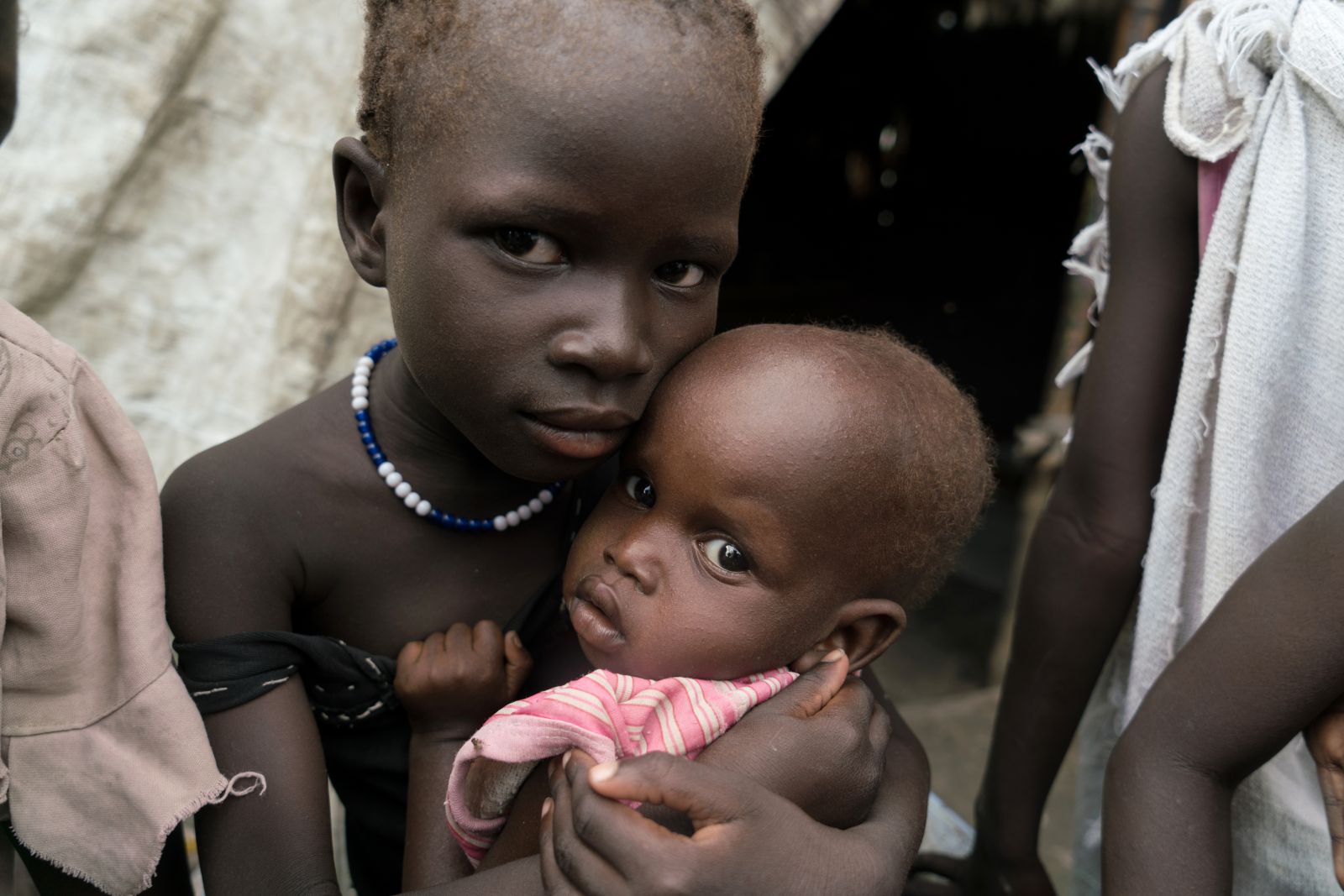 11-month old baby Chigoah Gai has just been admitted to the inpatient therapeutic feeding program supported by CARE in Bentiu hospital. He is frail, struggling for breath, with his tiny ribs visibly showing. A clear case of severe acute malnutrition.

His grandmother looks worried throughout the consultation, baby Gai has been vomiting and had diarrhea for the past 6 days. He weighs just 4.6kg.  Born in January 2021 as a normal healthy baby recent and unprecedented flooding in the area which forced his family from their home and meant they couldn’t get enough to eat, or clean drinking water has caused him to deteriorate into his current condition.

Chigoah’s grandmother says; ““The baby was used to milk but now all cattle have moved very far away to the border of Sudan. I sometimes give him goat’s milk but it’s not enough. The baby’s mother left him behind after seeing that we don’t have enough food to eat she left to look for something, but she never came back, I don’t know where she is.  We have dry food rations. but the baby doesn’t have milk and I don’t have money.”

Chigoah joins seven other babies admitted at the Centre. Each day the center receives between three to five children with acute severe malnutrition. The CARE supported stabilization Centre has a dedicated team of a pediatric doctor, clinical officer, nurses and feeding assistants who are in charge of running the day to day activities, ensuring that the children are well taken care of medically and well fed to support their recovery which can take anywhere between four days’ to one week depending on the severity of the child’s situation. Chigoah undergoes a number of tests, is treated for a bacterial infection, given a warm cup of milk and shown his bed, and he shortly falls fast asleep.

According to Michael Kiir, a CARE nurse the number of malnutrition cases have increased this year, and this is attributed to influx of the displaced communities in Bentiu and Rubkona town. He says; “The cases of malnutrition are increasing due to the floods and more displaced people arriving. There is shortage of food; and as a result, families are not eating well. They don’t give enough nutrients to support the body. In some cases, mothers are also not practicing good hygiene, which causes recurrent cases of bacterial infection.”

South Sudan is currently facing its highest levels of food insecurity and malnutrition, exacerbated by the impact of floods and displacement. According to UN OCHA more than 835,000 people were reported as affected by flooding across the country since May 2021. An average child growing up in South Sudan today does not have enough to eat and is at risk of growing up chronically malnourished. Up to 36% of children under 5 have had to seek medical attention for some form of diseases. Not only is there a basic lack of access to food, but there is also a lack of diversity of food.

People in Jonglei, Unity and Upper Nile states are the worst affected by the flood. Floods have destroyed farmlands and crops, affecting the seasonal harvest, placing at risk the next planting season, and killed a large number of livestock. People in some affected areas have no access to safe water, increasing the risk of waterborne diseases. Floodwaters continue to threaten people in areas such as Bentiu town in Unity State where flood-affected people, including those in the Bentiu displacement camp, are in a dire

Although at first sight Chigoah’s situation looked severe and life threatening, he is now out of danger with support from the CARE team. The Stabilisation Centre has been saving lives of young malnourished children from across the county, and so far no malnutrition related death has been reported at the Centre.

CARE is scaling up its nutrition services in Rubkona County; supporting 12 Nutrition sites in 9 payams out of which 9 payams in Rubkona county. However, reaching the communities most in need has become extremely difficult as roads become impassable and communities are cut off by floodwaters. Despite all this, CARE continues to reach out to the displaced communities  - often by using canoes to traverse the flood waters - in places where they have been displaced to so that they can still receive these crucial nutrition services.