Today, Fatima is 25 years old and a volunteer for CARE International in Yemen. On the occasion of the International Day of the Girl (11 October) she reflects on how she got married as a twelve year old girl, and why she thinks that education is key.

“It was winter and it was the beginning of the week. I remember that it was a joyful day at school. Saturday used to be my favourite day of the week because we had two classes of science. Science was my favourite subject. On that day I was playing hide and seek with my friends. We had so much fun! After having played for a long time, I was running back home, I was really late. When I arrived my parents were having lunch, it seemed like they were discussing an important issue. My father asked me to sit down. Sitting down on the floor my heart was pumping so fast. I knew something was wrong. Speaking very quietly, I asked my father whether everything is fine. He said ‘Yes, everything is fantastic. We have good news. You’re getting married in the next two weeks!’ I felt relieved that he was not upset that I was so late coming back home.
But at the same time I did not feel comfortable. I was only twelve at the time. What marriage meant to me as a twelve years old girl? Well, I thought of  a big beautiful white dress, a party that everyone in the village attends and getting gifts. What I did not know was that marriage meant having to give up all of my dreams and ambitions, but most importantly my childhood!

Fatima’s story is very common, especially in the area of Hajjah in the North West of Yemen. 85 percent of the girl’s here drop out of school between the age of eleven and fifteen. Many of them drop out because they get married or because they have to help their parents to collect water and wood. For those girls who finish elementary school, they cannot continue on to study in high school. The high school for girls is very far and it takes one hour to go by motorcycle. Girls are not allowed by their parents to go such long distances on their own.

After getting married Fatima realised that marriage is not just about a white wedding dress or leaving your parents house to live somewhere else. “Marriage means a lot of responsibilities. 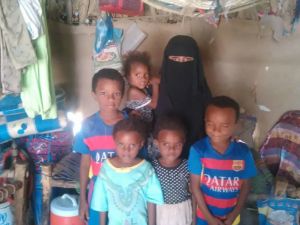 Responsibilities which should not have to lie with a twelve year old child. Sometimes I cried at night. I missed my school, my friends and how I used to play beside the yard of our house. Two of my friends got married after me, then others followed. Every time I attended a wedding my heart would break into tiny pieces as I had  to watch children getting married,” Fatima recounts.

After the war started Fatima’s husband lost his job and travelled to the city to look for work as a driver. He had an accident and passed. “My heart aches remembering him,” Fatima says. Now, with 25 years, she is a widow and a mother of five children.

Fatma with her children in Al shagadra / Photo: CARE

“I sometimes feel alone and week being responsible for five children isn’t an easy task. But I have a mission. I need to be strong for my children in order to educate them. I want them to learn that peace and education should be their driving factors in life and that they have to strive for it day and night.”

Fatima herself has started a new chapter in her life. She works as a volunteer with CARE and raises hygiene awareness in Al Shagadara village. More than 770,000 people are currently suspected to suffer from cholera in Yemen – the highest number ever reported in the period of one year. More than 2,100 people have died, many of them in the area Fatima works. “We teach women how to wash their hands before cooking and the importance of washing the vegetables and fruits, cleaning utensils that are used for cooking, eating and drinking. We also tell them how to educate their children on the importance of hygiene,” Fatima explains. “This volunteer work makes me happy, I feel joy and anticipation.  I have registered three of my children in school. I am very excited to be seeing them going to school.”

Education is a very important to Fatima. She says that it is what changes your life and guides you. “Once I heard a quote that said ‘If you educate a girl you educate a whole nation’.This should be our goal in life, we have to strive for it because girls are mothers, teachers and doctors. If we want the next generation to live a better life, education is the key.”

For more on our work in Yemen, click here.