Rich nations and institutions have been routinely over-reporting funding to protect developing countries from the climate crisis, which is expected to have left climate adaptation funds short by over $20 billion, a report from CARE has found.

The Paris Agreement requires countries to provide scaled-up financial resources, evenly balanced between mitigation and adaptation.[1] Developed countries pledged to mobilise $50 billion in annual adaptation finance by 2020. Official figures from the OECD show that in 2018 donors had committed just $16.8 billion.[2] Based on the most comprehensive assessment to-date, CARE has calculated that this figure is in fact staggeringly lower, at $9.7 billion.

The new report is published as world leaders and decision-makers convene for the Climate Adaptation Summit on 25 January. It follows the recently published Adaptation Gap Report by the UN Environment Programme (UNEP) assessing progress made in adaptation finance.

John Nordbo from CARE Denmark and one of the report’s authors said:

“The world’s poorest people are not responsible for the climate crisis yet are the hardest hit. Not only have rich nations let countries in the Global South down by failing to deliver enough adaptation finance, but they have tried to give the impression that they are providing more than they do. It is truly embarrassing. This injustice must be corrected, and a clear plan must be presented to show how they intend to live up to their commitments with real money – and no reporting tricks”.

Together with civil society organisations in Ghana, Uganda, Ethiopia, Nepal, Vietnam and the Philippines, CARE assessed 112 projects, representing 13% of total global adaptation finance between 2013-17. The research found climate adaptation finance to be over-reported by 42%, which if applied to the remaining projects, would result in $20 billion of over-reporting across this time period.

The research shows large amounts of climate finance for projects that bear no relation to adaptation and that donors exaggerate the adaptation component of their projects, thereby over-reporting the amount they actually spend on climate adaptation.  Assessments reveal that: 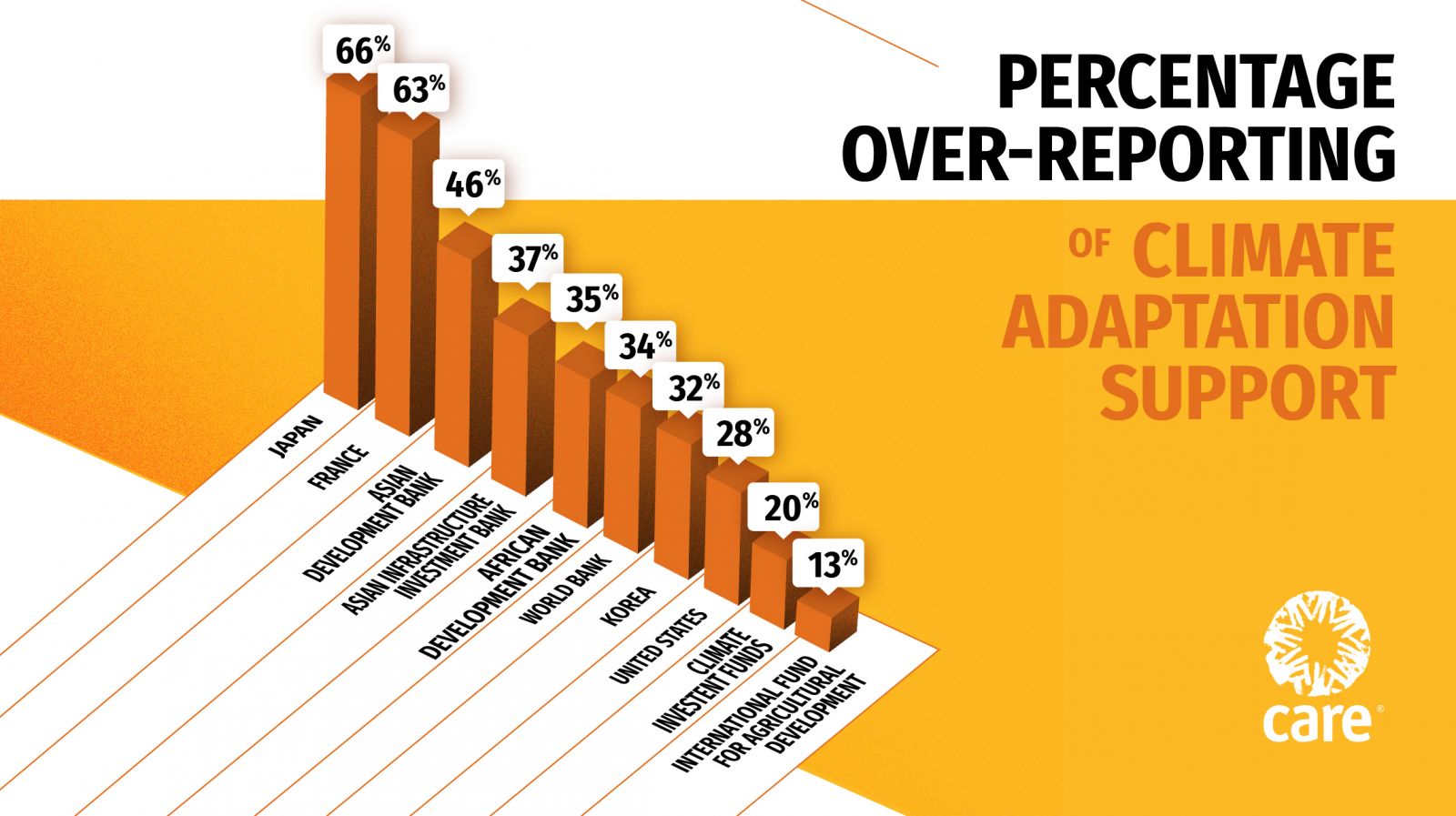 The report acknowledges that adaptation is inherently interlinked with broader development goals and poverty alleviation. As such, the six in-country assessments also looked into whether projects adequately considered gender equality and poverty reduction.

Concerningly, 47% of adaptation projects in all six countries do not mainstream gender equality. The Paris Agreement requires that adaptation action “should follow a country-driven, gender-responsive, participatory and fully transparent approach, taking into consideration vulnerable groups, communities and ecosystems”.[3]

“Vulnerable people and countries receive only a fraction of the support promised in Paris, as this report reveals. The Climate Adaptation Summit 2021 is an opportunity to remedy climate injustice and a chance to commit to adaptation that is gender transformative.”

Of further concern is that the largest financial provisions often fail to adequately consider the poorest in society. This is particularly true of infrastructure and market-based projects which are frequently provided with finance in the form of loans. For projects assessed in Ghana and Ethiopia – both at high risk of debt distress – 28% and 50% of total finance contributions respectively were provided as loans.

Bart Weijs from CARE Netherlands and co-author of the report, said:

“This is not just about the numbers. It’s about millions of vulnerable people risking their lives in ever more frequent climate disasters. It’s about restoring people’s faith in climate governance. $50 billion or more is really not a high price to pay for this – if we do this together.”

Founded in 1945, CARE International works around the globe to save lives, defeat poverty and achieve social justice. We put women and girls in the centre because we know that we cannot overcome poverty until all people have equal rights and opportunities. CARE International works in 100 countries to assist more than 68 million people to improve basic health and education, fight hunger, increase access to clean water and sanitation, expand economic opportunity, confront climate change and recover from disasters. More than 70% of those helped are women.

The report is based on assessments of 112 projects from 25 donors to 6 countries. In each country assessment teams have looked into available project documentation and carried out interviews with people in the field, or otherwise close to the projects. The total budget of the assessed projects amounts to 13% of the global adaptation finance reported by developed countries for the period 2013-17. As such the size of the sample covered by the project is very high, and there is no reason to believe that the findings from the research do not hold true for the rest of the adaptation finance reported by rich countries.