[Bogotá, Colombia, 29 April 2021] Guatemala and Honduras live day by day the severe consequences that the passage of tropical storms Eta and Iota daily. The two tropical storms have devastated the lives of more than seven million people[i], who now prepare to face a new hurricane season. Large numbers of affected communities continue to face water and sanitation problems, destroyed homes, lack of access to food, and unreconstructed land routes.

Climate change is exacerbating extreme weather in Central America, increasing the intensity of both rain and droughts, and warming sea temperatures are contributing to hyperactive storm seasons, which are devastating for communities without the resilience to deal with them.

The October 2020 tropical storms affected the north of Guatemala, caused flooding and landslides at a scale never seen before. Hundreds of thousands of people lost their homes and crops and were forced to evacuate, leaving everything behind. The damages caused are estimated by the United Nations Economic Commission for Latin America and the Caribbean (ECLAC)[ii] to be more than 700 billion dollars. In addition, it is estimated that more than 67,000 families will be affected by the loss of 38,000 hectares of crops.

“Guatemala is among the ten countries most vulnerable to natural disasters. The lack of land use planning, population growth, and lack of political will to reduce risks only increase the vulnerabilities of the communities. The 2.4 million affected by Eta and Iota have not yet recovered, while the first rains of the 2021 season caused the first displacement of more than a thousand people.” 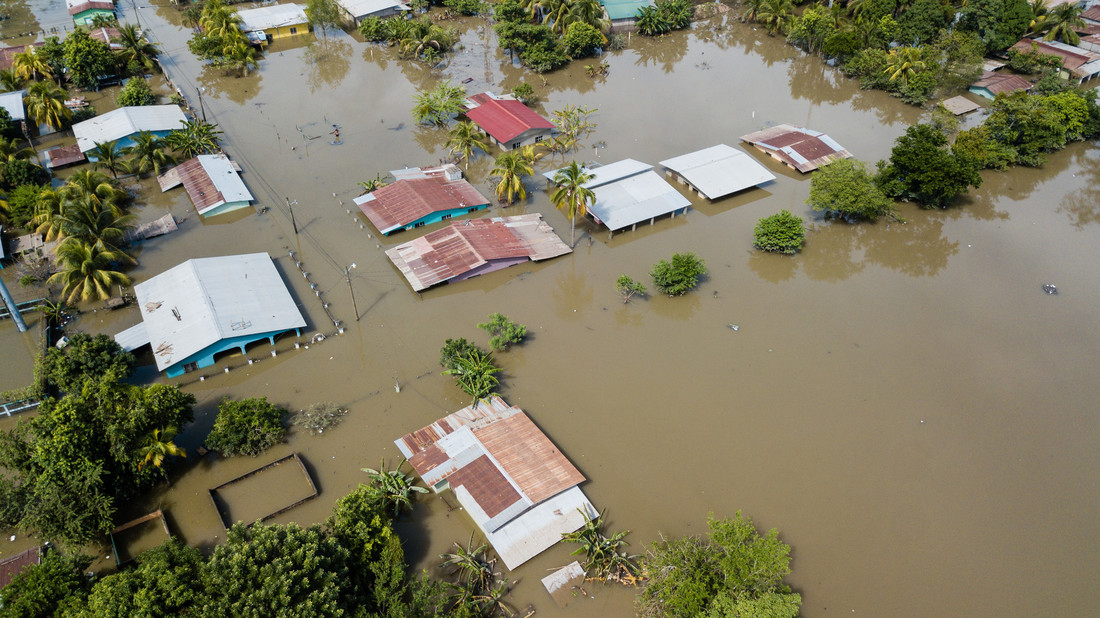 Photo: Hurricane Iota has submerged the Sula Valley, Honduras more than 100,000 people who had already suffered devastation by ETA are in temporary shelters.

In Honduras - the country most severely affected by Eta and Iota - the impact in the Sula Valley left hundreds of communities in humanitarian need due to the destruction caused by flooding. In early April, it was reported that thousands of people had to leave temporary shelters to return to their communities despite not having good places to stay because they were closed by the government to use the facilities for other purposes. This is one of the countries with the highest rates of food insecurity in the region and ranking 13th worldwide[iii]. It is estimated that in 2021 more than 3 million people will suffer from hunger across the country.

"The impact of the hurricane season aggravated the situation of poverty, hunger, and inequality that is occurring in both Guatemala and Honduras due to the COVID 19 pandemic. It has created the conditions for thousands of people to migrate in search of a better life, exposing women and girls to gender-based violence and human trafficking along migratory routes. The people who make up the 'migrant caravans' come from the areas most affected by the storms."

CARE and UN Women conducted a Rapid Gender Analysis in Guatemala[iv] and Honduras[v] in January to measure the effects of the tropical storms on women and girls and found that they have exacerbated already existing gender inequalities. The arrival of storms Eta and Iota left thousands of women unprotected, forcing them into temporary shelters and into employment in the informal sector after losing their homes and crops.

One of the main effects was the loss of autonomy: women have fewer or no social, political, and economic resources. Women also continue to assume sole responsibility for reproductive health issues and care work at home, perpetuating gender stereotypes that limit their possibilities for development. For women who returned to their communities, there is anxiety and, in some cases, depression, especially when remembering what happened to them, and the uncertainty of not knowing what will happen to their community during the next hurricane season.

“The lack of access to adequate and appropriate support services and protection, the lack of access to economic opportunities as well as the lack of knowledge of their rights are increasing the risk of women and girls from most affected to communities to gender-based violence, abuse, and exploitation. Many women and their children are at risk of displacement or migration as they are afraid to return to their communities either by the threat of new floods or the threat of gangs.”

Since November 2020, CARE has assisted more than 25,000 people in Honduras and Guatemala affected by the hurricane season. Our actions sought to reduce the risk of transmission of COVID-19, ensure access to safe water, reduce the risk of malnutrition amongst vulnerable groups, guarantee access to protection systems and psychological support for women survivors of gender based violence, as well as meeting the immediate needs of food,shelter and livelihoods for the affected populations.