CARE International one of first international NGOs to begin vital aid assistance to those affected by Beirut blast, as death toll continues to rise 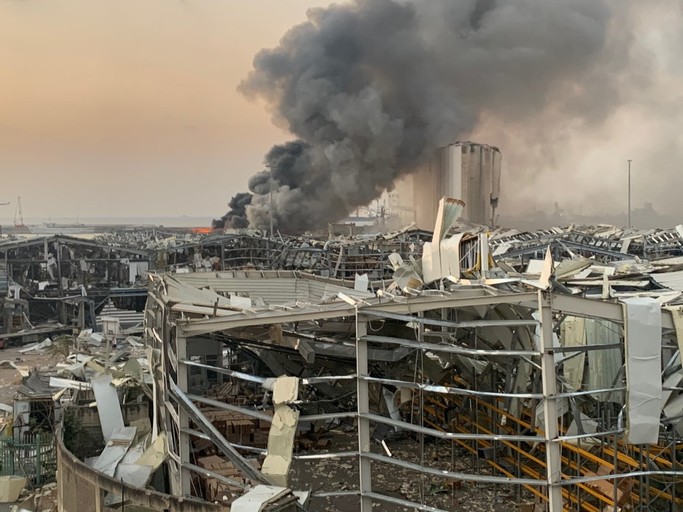 Beirut, 06 August 2020 – CARE International is to begin vital lifesaving food assistance, via local organisations, to thousands of people in Beirut after the devastating explosion that decimated much of the city’s port and surrounding areas; (to date) killing over 135 people and injuring 6,000 more on Tuesday 4th August.

“First thing Friday morning we will begin distributing hot meals and food parcels, through frontline local organisations already on the ground, to people in affected areas who have lost everything,” says Bujar Hoxha, CARE Lebanon Country Director; “even before the explosion thousands of people were struggling to feed themselves and their families, with 50% of the Lebanese population living below the poverty line. They not only don’t have access to food, but all their food storage facilities have been destroyed and increased scarcity of food will only push already skyrocketing prices even higher.”

CARE Lebanon’s versatile teams have already begun mobilising with a range of experts from shelter to social workers ready to respond; with a particular emphasis on women and girls who are most vulnerable in these situations.

“Right now, the main priorities are food and shelter as thousands of people have become homeless overnight. But we are also very worried about hygiene and sanitation conditions in the aftermath. Already in the last few days cases of COVID-19 have increased as health facilities are overwhelmed, and more people are coming in contact with each other than before. In the coming weeks we will also focus on providing hygiene products to households to try and help stem further waves of coronavirus on an already extremely vulnerable population,” he adds.

Lebanon was already facing a triple crisis; with an economic and food crisis and the most recent COVID-19 health crisis.  Beirut also has the third highest population of Syrian refugees in the country (hosting over 200,000 people) who are already some of the most vulnerable and stand to be some of the worst affected by this latest tragedy. CARE Lebanon works with refugee communities, and especially women and girls who are often disproportionately affected by crises and bear the responsibility for the majority of household and family work, as well as being at the greatest risk of gender-based violence.

“We cannot also underestimate the impact this explosion will have on millions of people’s mental health,” notes Hoxha. “Already people were suffering from trauma and shock as a result of the economic situation, and in the case of Syrian refugees – from also being forced from their homes due to conflict in violence. While our immediate priority is to provide food, shelter and multi-purpose cash assistance, psychosocial support will also be crucial in the coming days, weeks and months. This latest event adds to already huge amounts of existing trauma, and if we are not careful we could also be facing a mental health crisis in the country.”

The Beirut port is critical for the majority of imports and supplies of goods like food and basic goods into Lebanon and neighbouring war-torn Syria.

“80% of international supplies that were coming in to Lebanon came through the port of Lebanon and now no longer exist,” says Hoxha “this was also the main port for supplies to Syria, and this tragedy means that nothing will get to Syria now either. Even switching to the port of Tripoli would only allow around 30% of goods to reach the country and neighbouring countries. The knock-on and long-term effects of this explosion are mind blowing, not just for Lebanon but for the region,” he adds.

CARE Lebanon is urgently calling for an additional US $10 million to help around 300,000 of the households worst affected and displaced by the explosion with food, shelter, hygiene and sanitation items as well as psychosocial support. “We have secured US $50,000 of immediate emergency response funds already, but this will not last us more than a couple of days and we urgently need more funds to help people,” says Hoxha. “Our staff are showing incredible dedication and passion to help, I have been inundated with staff offering to assist with this emergency response, despite suffering the trauma of it first-hand themselves. For them it is not work, its personal and it’s their homes.”

CARE re-established a full fledge presence in in Lebanon in 2013 to support Syrian refugees and Lebanese host communities affected by the Syria Crisis. CARE meets refugees’ and host communities’ most basic and pressing needs, mainly providing water, sanitation, hygiene, non-food items and cash assistance in the areas of Mount-Lebanon, North and South Lebanon. This includes emergency water and sanitation rehabilitation at household level distribution of sanitary items, to newly arrived families and the provision of hygiene promotion sessions.