The Love that Binds: Orphans Not One, But Two

The tragic mudslide of August 14, 2017 originated from the community of Regent in Sierra Leone’s capital Freetown, which lies along the slope of a mountain terrain. This community accounts for much of the disaster’s hundreds of casualties and internally displaced persons. It is almost expected that survivors would associate one’s chance of survival as being out of Regent when the tragedy struck. 19-year-old Fatmata Jawara affirms a shared assessment of the sad experience. She is one of 53 women and children who received hygiene kits, food and relief supplies from CARE Sierra Leone’s emergency response efforts, in partnership with the Don Bosco organization. Fatmata, along with her niece, Mayatu Kamara, sought refuge in Don Bosco’s tented camps. 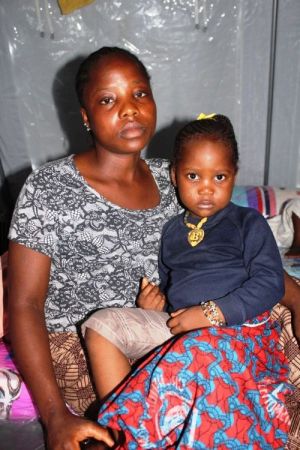 Fatmata recalled a simple life in Regent where she lived in a house with eleven other family members. Most of her time was devoted to taking care of her 3-year-old niece Mayatu who is the daughter of Fatmata’s elder sister. Aunt and niece formed a bond as strong as a mother to a child. They were almost inseparable.

On August 13, Fatmata was scheduled to a household errand in a community away from Regent. It was a rainy day, so Fatmata was to leave the house early to enable return before darkness falls. She would leave without Mayatu, Fatmata decisively told her parents. However, that day was not like any usual day for Mayatu. She cried uncontrollably begging for Fatmata to bring her along. But, it was raining, so Fatmata was firm to leave without the toddler. As Fatmata took her first few steps away from the house, Mayatu’s cries became louder and louder, almost pleading. Mayatu was adamant: for her it was no ordinary day and she wanted to be with her beloved aunt. Fatmata’s heart softened. Like a protective mother to her beloved child, she packed Mayatu. Only then did Mayatu stop crying. Together, they left the house not knowing that it would be the last time they would see their other family members.

When news of the mudslide reached Fatmata in the morning of August 14, she prayed hard for her family. Instinctively, she returned to Regent and searched. With a lump in her throat, Fatmata weakly utters,

“I looked everywhere… They were all gone. The house is gone.”

Fatmata cuddles young Mayatu who is innocently resting in her bosom. Fighting back tears, she distinctly enunciates, “They are nowhere. I lost all nine family members--- my parents, my brothers and sisters.”

Orphans Not One, But Two: Fear of the Uncertain

Finding herself an orphan with another young orphan, Fatmata fears for an uncertain future. Her first selfless worry for a responsibility as huge as life resonates:

“What am I going to do to raise this child? I have never been to school.
I don’t know what to do. But I know I have to survive for this child. I pray for help to come.”

As humanitarians, we can only do so much. But, we build and strengthen partnerships in the hope that in partnering, we are able to reach the most vulnerable--- the women, the children, the orphans--- and transform their lives. Natural disasters like the tragic mudslide devastate people exposing them to homelessness, exacerbating poverty and vulnerability such as gender-based violence, all beyond imagination. Fatmata and Mayatu have received relief supplies from CARE to cover the most basic needs – what they need now is support to rebuild their lives.

For more on our work in Sierra Leone, click here.