The horrific story of a refugee mother in Myanmar

Nur’s* horror is still written all over her face. She holds her son tightly, almost as if she is afraid of losing him again. Her voice cracks as she quietly describes her last few days in Myanmar; the place she used to call home. “Seven or eight armed men had entered our home in Myanmar, killed my husband in front of my eyes and took me to a place far away from home,” she says.

She and her two sons sought refuge about a month ago, after “they blindfolded me and dragged me out of the house. We walked for more than an hour until we reached the place… where they touched me,” Nur says.

When she found her way back to her village, her husband’s body was gone but thankfully her children returned. They had fled to the neighbors place out of fear when they heard gun shots. She saw other women in her village leave for Bangladesh to seek safety. Most of them shared similar stories of rape and torture. Of houses burnt. Of family members killed. 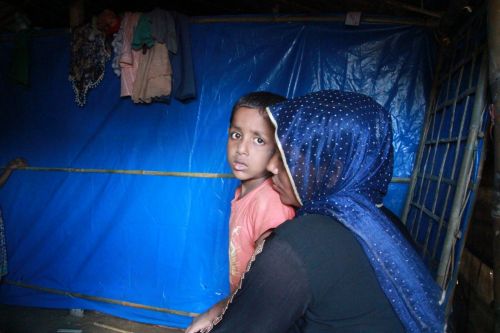 She holds her son tightly, almost as if she is afraid of losing him again. Photo: Jennifer Bose/CARE

The psychological toll on refugees who have crossed the border to Bangladesh is heavy. Close to half a million refugees from Myanmar are in urgent need of assistance as they have either witnessed, experienced or are at risk of gender-based violence. CARE has secured funds to establish four women-friendly spaces for 30,000 refugees in the coming weeks. The centers will be used to identify and support survivors of gender-based violence, to raise awareness of emergency care services, and to provide life-saving medical referrals and psychosocial support.

Nur stayed with relatives for three days back in Myanmar before she decided to leave. They walked for seven days until they arrived in Bangladesh.

When they were crossing a river on the way, Nur fell into the water with her younger son, Mohammed, and had lost him in the water. “I couldn’t hold him anymore. But I saw that a man rescued him and knew he was alive,” she says.

Frantically she looked for him everywhere. When she almost lost hope, she finally found him at a roadside, waiting for her with the same stranger who rescued him. It was a miracle.

Not everyone is as lucky as Nur. According to the EU, more than 40,000 unaccompanied refugee children are in the camps in Bangladesh.

Nur and her two sons now stay in the camp together with three other families with whom they share a tent for the night. So far, they have only received very limited assistance. “We don’t have any food, we don’t have a home and we don’t know where to go. We don’t have a mattress, bed or anything,” she says. They lay down the few clothes they have on the floor and sleep on them at night. But despite the poor living conditions, she wants to stay in Bangladesh. “I have more freedom here and I feel safer,” Nur says. “I just want my children to be able to study here so that we can rebuild our lives,” she adds.

CARE is appealing for 10 Million USD to assist more than 150,000 refugees until the end of the year. Less than half of the funds have been secured so far.

For more on our work in Bangladesh click here.