Swaying between a financial crisis and the coronavirus, Tripoli plunges into the abyss 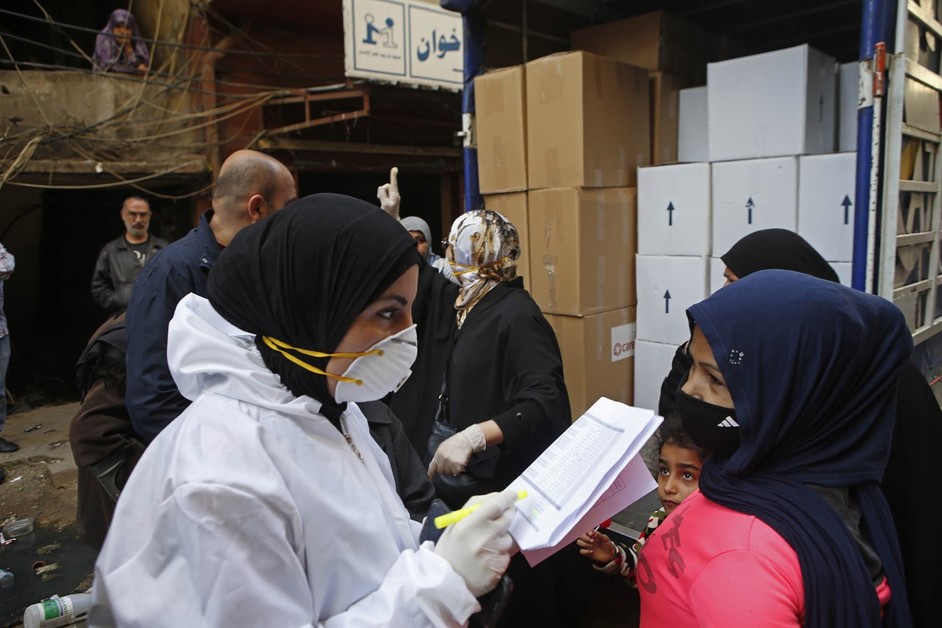 Photos: As part of CARE’s response to COVID-19 in Lebanon and to prevent further spread of the virus, CARE staff fill vans with food parcels and hygiene items, in partnership with Lebanese NGO Sanabel al-Nour. Credit: Paul Assaker/CARE.

"We will die eventually… If not because of this coronavirus outbreak, it will be from dearth and scarcity." In the popular souks of the capital of North Lebanon, life goes on as if the pandemic had never emerged." 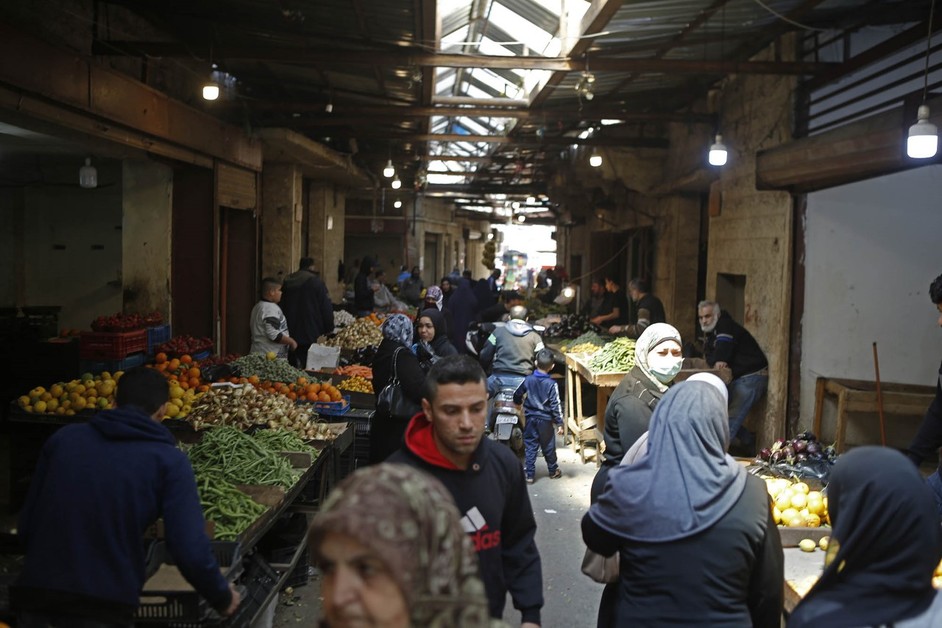 In the winding alleys of Bab al-Tabbaneh’s vegetable market, in Tripoli, one could quickly slip into amnesia and become utterly oblivious of the Government of Lebanon’s enforced lockdown due to the coronavirus pandemic. Here, numerous and vibrantly colored stalls perfectly blend in with the buzz of the marketplace. Strolling without masks or gloves, shoppers scramble along, one carefully picking his vegetables from a cart, another opting for fish sold at the auction or for a chicken that has just been slaughtered.

Like all the popular souks of Tripoli, Bab al-Tabbaneh’s market remains open notwithstanding the quarantine measures taken by the government, which include closure of all markets and general population confinement. 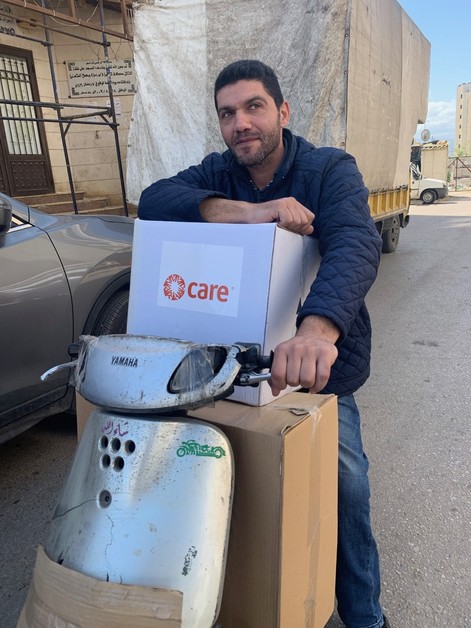 In and out of the souk alleys, the echoes of the same story reverberate. Between the risk of dying from the threat of infection by the coronavirus and the certainty of dying due to poverty, one has to make a choice. In the second largest city in Lebanon, yet the poorest in the country, thousands of people work as day laborers, hence, forced to go out every day to seek sustenance for their families.

Omar*, a young tanned day worker in his thirties, works at a greengrocer in the souk of Bab al-Tabbaneh. “Before, even with the thawra (popular uprising of October 2019), I could still earn 40,000 Liras (about US $14) per day. Today, I am not even able to make 10,000 Liras a day (about $3). This coronavirus thing has brought us to our knees,” he says.

In another stall, Bahaa, 24, bursts with anger. “They invented this coronavirus thing to make Tripoli even poorer. As if the economic calamity was not enough," he says. "Tripoli and other cities will soon go into an uprising,” he adds. “We are starving. Here, children don't even go to school anymore; they have to go find odd jobs to do in order to help their parents out. And even if they do go to school, you’ll find them scouring the streets in the afternoon, on the lookout for chunks of scrap metal and plastic, which they sell by the kilo.”

Next to him, Ahmad, an 11-year-old child, talks and behaves like an adult. With five brothers and sisters, a sick father and a completely distraught and overwhelmed mother, he had to quit school. “I want to support my family,” he says. Dreaming of working with his hands, learning a trade and becoming a carpenter, he resorted to working on a small site. 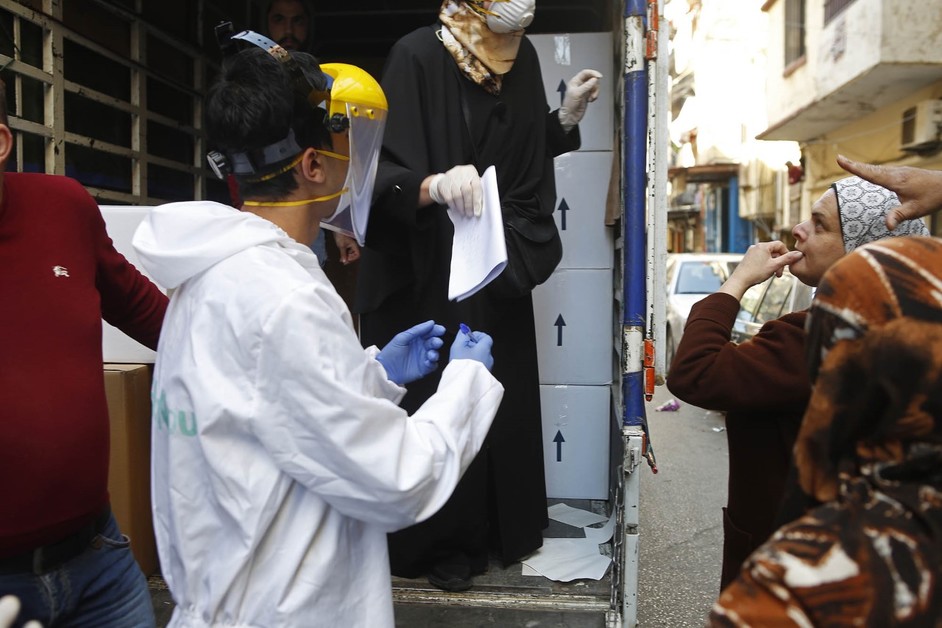 A father in his fifties, Fady works with his three children at the greengrocer he owns. Like other merchants in the souk, he doesn’t take any precautions. “We’re going to die eventually; if it’s not from the coronavirus, it’s going to be from poverty. So we trust God. I know the virus exists, but what is more dangerous: this epidemic or poverty? [The government] wants us to stay at home, so be it, but they have to provide us with food and enough money to pay the rent,” he says.

In the old quarter bordering Tripoli’s Crusader Citadel, one of the city’s poor neighborhoods, two women are seated in a grocery store.

One of them, Khadijeh, 39, mother of four, is at a loss for avenues to pay her rent. “We are three months behind. Every day, we run the risk of being kicked out on the street. In this city, you find nothing more than poor, hungry people,” explains Khadijeh, whose husband is a day laborer and has been working less and less since last October. 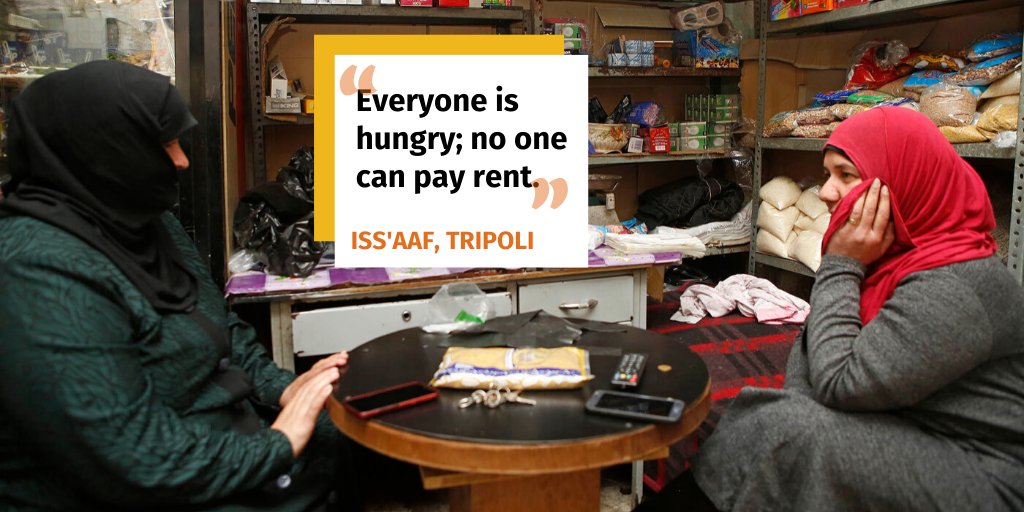 The other, Iss’aaf, 42, adds: “Don’t tire yourself anymore. In Tripoli, it’s the same story everywhere. Everyone is hungry; no one can pay his rent. Come see my clients’ credit lists on this notebook. Sometimes I tell myself that I don’t want to sell anything to them on credit anymore, but I don’t have the heart to do it. We are all poor and we have to help each other.”

A little further away, at another souk on a main road in the city, Ahmed, 37, a fruit and vegetable peddler, pushes his cart. “I have five children, aged between 12 and 3. If I don’t work, we will starve. It’s been a long time since I stopped paying rent and electricity. My story echoes that of all of this city’s poverty-ridden dwellers,” he says. Following a pause and a sigh, he goes on to say, “I wonder how we’ll actually manage during Ramadan.”

During the holy month of Ramadan, Muslim families gather every evening after a long day of fasting for the Iftar, or breaking of the fast, where several dishes – traditionally soup, salad and meat – are served.

*Some names have been changed to protect identities.