The countries of the Horn of Africa (Ethiopia, Kenya, Somalia) are experiencing a severe drought. The roads and settlements in some areas of Somalia are littered with animal carcasses. Families are in urgent need of food and water. “This is no ordinary drought. It’s the worst ever experienced in Sool region since 1974” an 85-year old man tells CARE.

What is the difference between a food crisis and a famine?

"Famine/catastrophe" is the worst-case scenario on a five-level scale to gauge food security. According to the UN, famine is declared when acute malnutrition rates among children exceed 30 per cent, more than two people per every 10,000 die per day, and when people are not able to get food and other basic necessities. However, we must not wait for a famine declaration to act– people are going to bed hungry at night if they are in level four (emergency) or three (crisis).

Why do food crises recur in the Horn of Africa?

Droughts are a seasonal reality for people in the Horn of Africa. The lives of pastoralists and farmers are adapted to the cycles of rain and dry spells. However, when rains fail successively, livestock herds are reduced beyond recovery and farms wither in the drought. Food and water prices rise sharply while people earn less by selling their emaciated sheep, goats or camels. People are experiencing first-hand the impacts of climate change and weather phenomena like El Niño and La Niña: Rains are becoming shorter and less frequent; pasture lands are turning into deserts. Survival becomes increasingly more difficult. Food shortages and food crises are becoming more frequent, exhausting people’s ability to recover and putting them over the edge into severe hunger.

When was the last famine declared in the Horn of Africa?

In July 2011 famine has been declared in two areas of southern Somalia: the Bakool agropastoral livelihood zones and all areas of Lower Shabelle. The world watched in horror as almost 260,000 Somalis starved to death. Somalia, Ethiopia, Djibouti and Kenya experienced the worst drought in 60 years that killed pastoralists’ livestock and withered farmers’ fields. Across the region, more than ten million people were in need of life-saving aid. 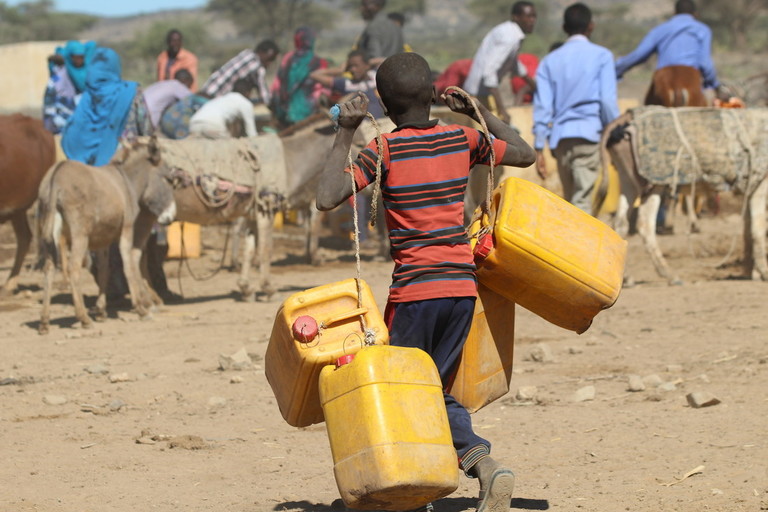 What must be done to prevent a food crisis?

Preventing a food crisis or famine is an achievable task – with sufficient funds and political will. Since the famine in Somalia in 2011, early warning systems have been strengthened, resilience building activities across the region have been implemented to help people prepare for and cope with recurring droughts. However, there is still a need for quickly released funds to respond to food crises in their early stages to prevent people from going hungry en masse and prevent hundreds of thousands of children from suffering crippling malnutrition.  In 2011, donations started to flow as soon as the TV cameras broadcasted pictures of starving children and desperate Somali families fleeing by the thousands to Kenya. Yet by then, it was already too late for many women, men and children.

What is the current situation?

Over 15 million people in Ethiopia, Kenya and Somalia are affected by the drought. Nearly 680,000 pregnant women and lactating mothers are in need of urgent aid, as malnutrition during pregnancy and the first two years of a child’s life can have a very negative lasting impact on the child’s future health and development. In some areas of Somalia, families told us that they spend more than half their income on water. Households have only three litres of water per person per day for drinking, washing, cooking. Most of the pastoral households we talked to have lost half or more of their livestock such as sheep, goats and camels. Families have to sell goats for 15 USD whereas they could earn 70 USD before the drought. In some areas, the price for a barrel of water has risen by 400 percent, from 2 USD before the drought to 10 USD today. In some areas of Somalia, aid workers are challenged to reach people in need due to the ongoing instability and the security threats by armed groups.

Who is most affected?

Women and girls are most affected. As families are skipping meals and only eat once a day, women and girls eat last and the least. In Somalia, women and girls are responsible for herding small livestock and collect water. Yet as most water points dried up, they now have to walk on average 50 kilometres in search for water, compared to two kilometres before the current drought. Walking long distances alone puts them at risk of attack. Most pastoral and rural households assessed have stopped sending their children to school as they cannot afford education costs any longer and need the children’s support to collect water.