She didn’t have much but lost it all: the heartbreaking story of a conflict survivor in Ethiopia

Almaz is one of the 1 million people who were displaced during the most recent ethnic conflict in Gedeo and West Guji zones in southern Ethiopia. Renewed inter-communal violence along the borders was reported during multiple waves between April and July 2018. People were killed, houses were burnt down, damaged, looted and livelihoods were destroyed.

Most of the displaced had to flee within minutes and sought initial refuge in public buildings, such as schools and churches. The capacity of the hosting communities was stretched to the limit. Many moved to camps for internally displaced in the following months and still live there, unable to return to their destroyed villages.

CARE started supporting the displaced at the onset of the crisis. We provided packages containing blankets and mattresses and currently focus on water, sanitation and hygiene both in the camps and in host communities. We reached over 60,000 people with aid and continue with the construction and rehabilitation of water schemes to help people return back home in safety and in dignity.

It is dark in Almaz’s small hut. Her home is sparsely furnished with a few cupboards and one bed on which she is sitting. She looks fragile, with her back bent and her right hand covering her face as she is trying to hide her tears. She has dark circles under her eyes. Her clothes are ripped. Her voice breaks as she is bringing up memories of the day her life changed dramatically. The roof of her house still has cracks from the attack that forced her and her family to flee a few months ago. Just on the opposite side of her home, hundreds of temporary bamboo houses are lined up as Chirigu, her village, became one of the biggest displacement camps in southern Ethiopia. 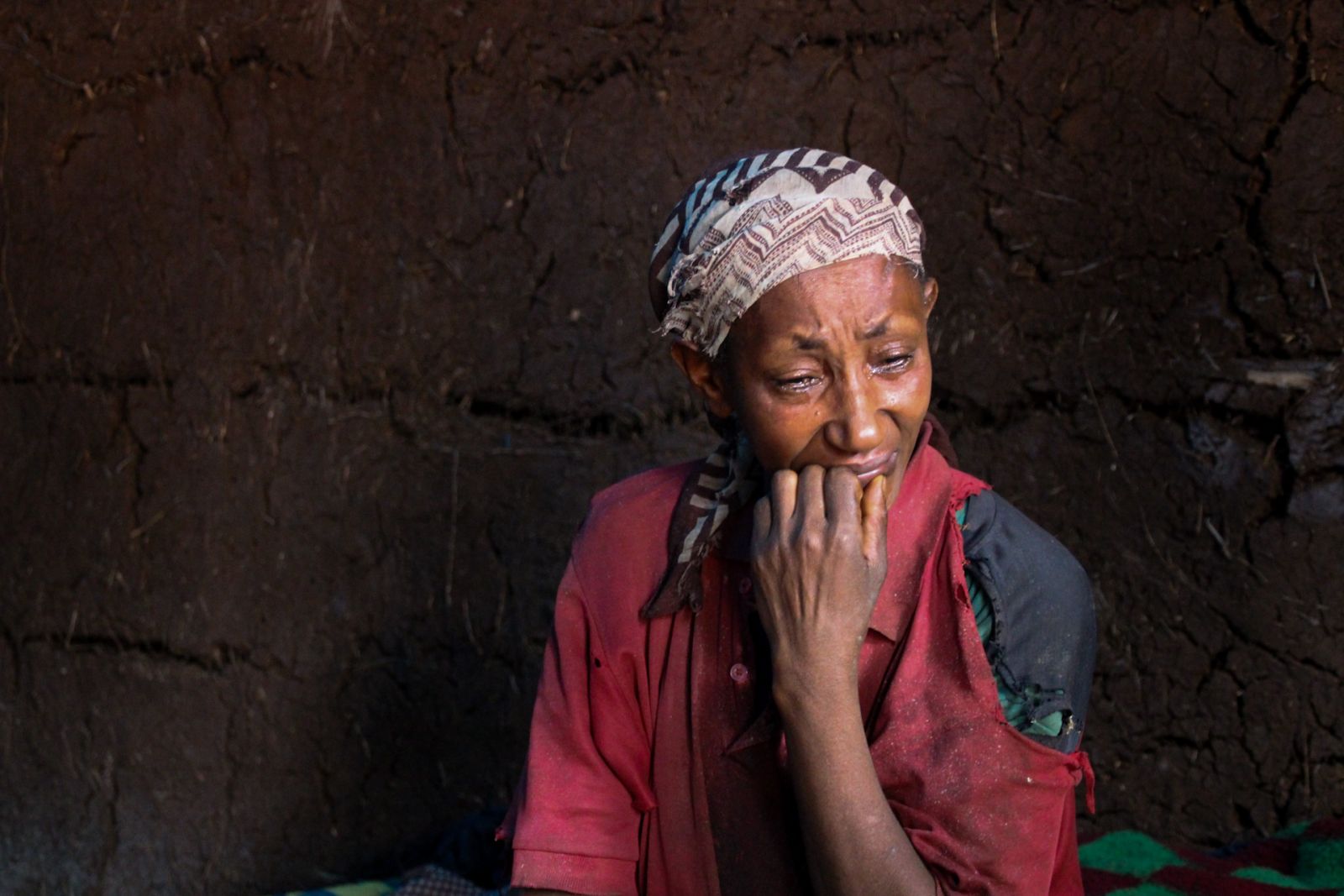 Almaz’s story in their own words:

It was evening when all of the sudden we heard gunshots and people screaming. Me and my family were at home. We didn’t know what was going on in the village. We looked outside and saw people fleeing when we realized something was wrong. My husband went outside to look. This was the last time I saw him.

I didn’t have time to wait for him, not knowing that he was shot during the attack on our village. I gathered my six children and we started walking towards Haru, a nearby village. We were all so scared and in shock by what we had just witnessed. Once we arrived in Haru, we went to an abandoned school building where people were gathering. It became our new home for the next three months.

A few days later, some other villagers told me that my husband was killed. My heart shattered as my son brought back the body of his father to Haru. But the most difficult day was yet to come. Unable to cope with his father’s loss, my 23-year-old son committed suicide just a week after we had left our homes and old lives behind. When he found out that my husband passed away, he electrocuted himself. When I heard about this, a part of me died as well.

I would give everything to go back to the days things were normal. My husband used to work for the military, so I raised our children mostly by myself.  But in recent years we used to do farming on our coffee and wheat fields. He was the breadwinner in our family. I don’t know how we can survive without him.

A few months ago, we returned to our old home in Chirigu. Our house was still standing but the roof was destroyed in the attack. So much has changed in our village, it doesn’t feel like home anymore.

We used to have nine children. I lost three of them due to sickness. It hurts so much to have lost another son. I feel so much pain inside of me. I want my other children to go to school but I can only afford to send one of them. I am weak and I depend on help from aid organizations now. I see no future for us