“I want to help other women to be stronger”

The usually neat Grand Mosque yard now looks like a massive camping ground. Hundreds of temporary camps were set up there, providing a temporary home to around 1,600 people whose home were destroyed by the earthquake and tsunami in late September 2018. There are only 10 toilets for the whole compound; one toilet for every 160 men, women and children.

“It is an unhealthy and unsafe environment, especially for women and girls. Bathrooms not enough for them; dirty and far from their tents,” says 25-year-old Fira, a volunteer at a women friendly space managed by the Ministry of Social Affairs. Temporary toilets, which are built without solid walls, doors, and locks leave women and girls exposed to harassment and assault. “We started receiving reports that some girls were sexually harassed when they waited in bathroom line,” she adds. 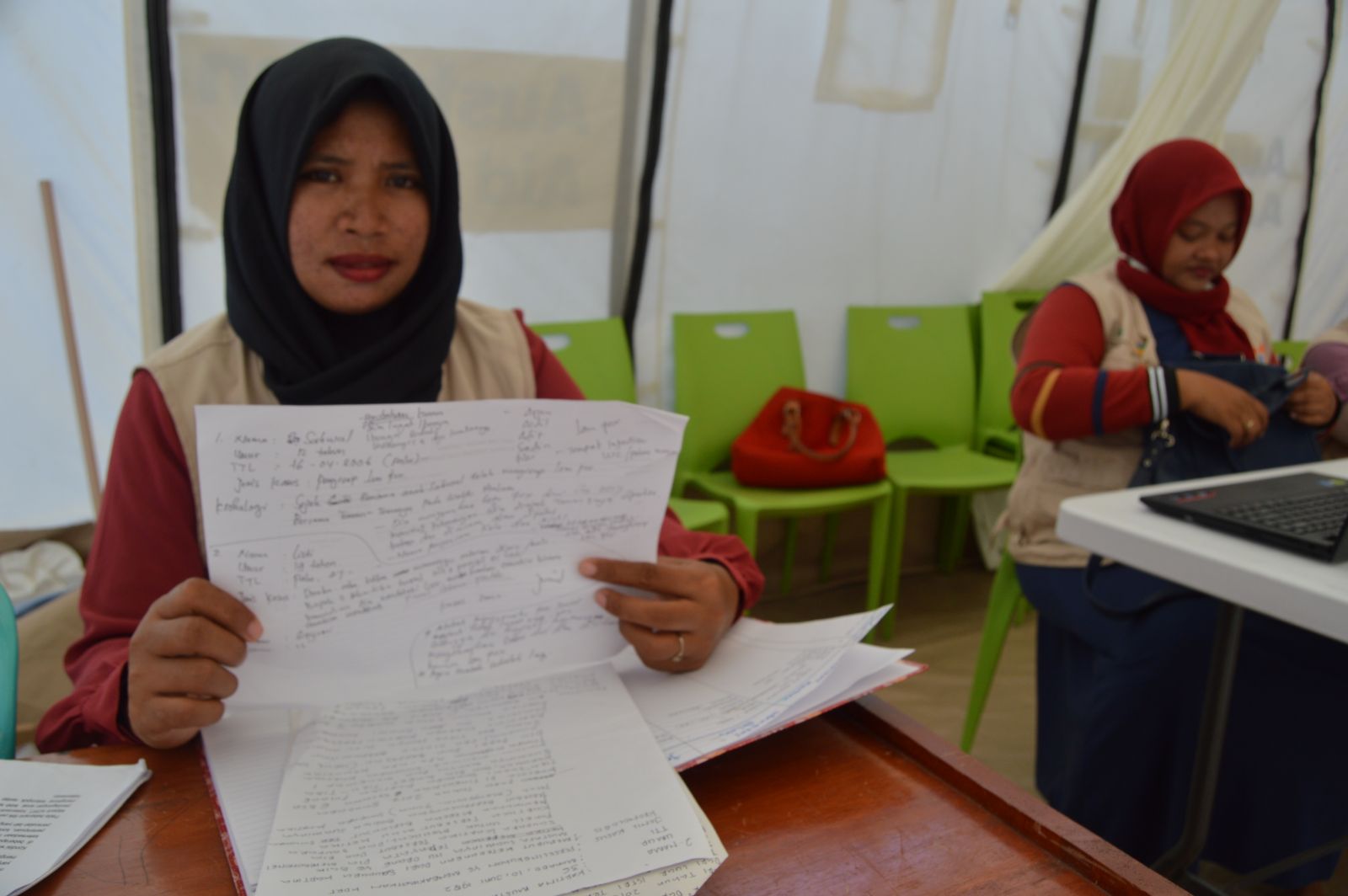 On the evening of September 28, a 7.4 magnitude earthquake rocked the island. Ravaging tsunami waves followed suit, sweeping away everything that in their path. Around 1,500 people died that night. More than 330,000 survivors lost their homes and were forced to live in makeshift tents without any comfort of a home. The group at the Grand Mosque yard is one of the largest of these.

“Women and girls live here without privacy. They live in a small tent which often they share with the other family’s members,” explains Fira. She herself knows the tragedy cause by the earthquake only too well; she lost her husband and five-year-old son that night. They were both swept away by the tsunami. Her son’s body was found days after and buried in a mass grave, while her husband’s body has never been found.

During the day, Fira stays in the camp, dedicating herself to helping the people there. In the evenings she goes home to her 3-year-old daughter. “I wanted to show that I can rise after the big fall. I want to help others. I want to help other women to be stronger,” she says. She worries about the women having to live together in these makeshift shelters, with hundreds of strangers and little protection; “you will not know how depressing it is, unless you are a woman,” she adds.

Women and children have greater risks to their survival and recovery in the aftermath of natural disasters. Inadequate overcrowded and below-par temporary camps can be especially harmful for their health and safety as well as increasing risks of violence and harassment. A lack of access to clean water and sanitation facilities and hygiene supplies makes them vulnerable to disease. Stress and trauma within the family can also potentially lead to increased risks of gender-based violence.

“There is one married woman here that got beaten up by her husband. Their child witnessed the beating and is traumatized because of is,” says Fira, as she files the just-recently reported abuse cases. But there are not enough cases being reported. It is not that they don’t happen, she notes, but more that women are not comfortable reporting them. To address that, rather than sitting in the tent waiting for women to come to her, Fira and her two colleagues go around to the tents and reach out to the women. “From what we see here, it seems that older married women are prone to domestic violence, while the young girls are facing the threat of sexual harassment and trafficking,” she says.

Access to clean water is another big issue. Women and girls tend to need more water than men. They need it for cooking, washing clothes, bathing their children, and for their own personal hygiene, especially during menstruation. With most infrastructure damaged in the earthquake, the communities rely entirely on water trucking. “There are currently only five water reservoirs in the compound, and the refilling sometime comes late. In some parts, people often do not have water,” Fira explains.

Women’s responsibilities in their families are magnified and expanded post-disaster, with significantly less support and resources. Despite this, the needs of women and girls are often overlooked during the relief and recovery process.

For this reason, CARE focuses its relief intervention on women. As part of its emergency response, CARE provides packages include tarpaulins, blanket, mattress, water and sanitation kits - including locally-preferred sanitary materials - for women and adolescent girls, in order to help them maintain their dignity during these tough times. Committed to ensuring gender and social inclusion at every phase of its emergency work, CARE starts by having a team composed of both women and men. Having females staff facilitates consultations with women and adolescent girls and, encourages them to express their needs, priorities and concerns. In the longer-term CARE is also planning livelihood support, that aims to recover people’s - especially women’s - ability to function and strengthen their resilience towards recurring disasters.