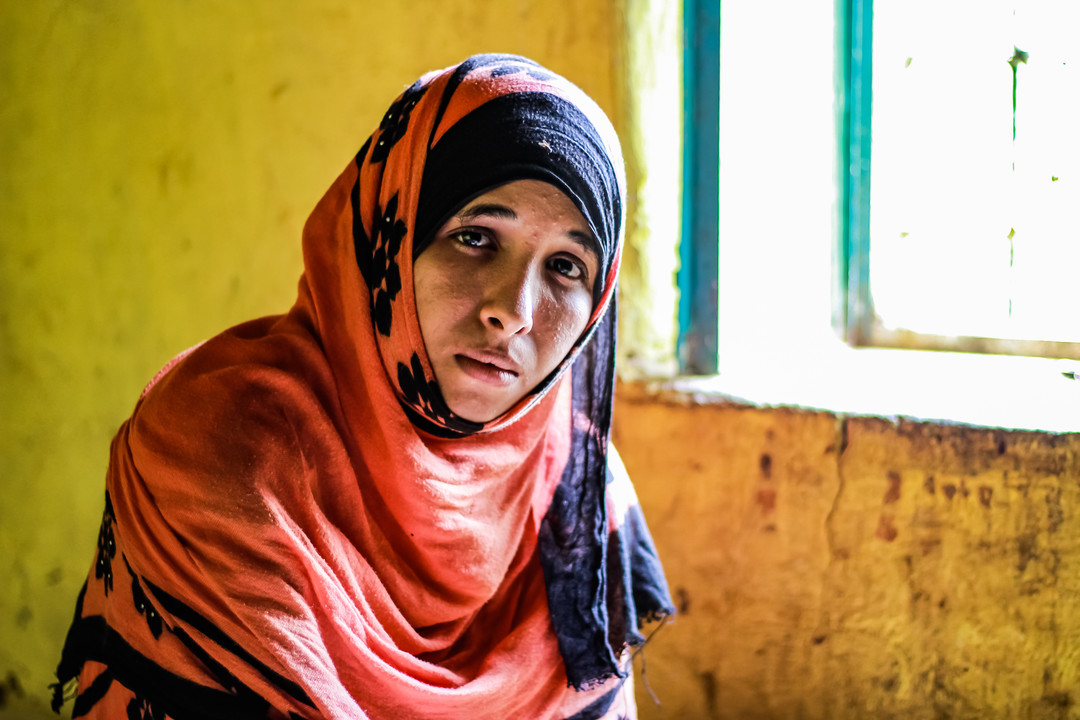 The humanitarian crisis in Yemen remains the worst in the world and over four years of intense conflict, as well as severe economic decline and recent famine and cholera, has put millions at risk. An estimated 80 per cent of the population – 24 million people – require some form of humanitarian or protection assistance, including 14.3 million who are in acute need. Severity of needs is deepening, with the number of people in acute need a staggering 27 per cent higher than last year. Two-thirds of all districts in the country are already pre-famine, and one-third face a convergence of multiple acute vulnerabilities. The escalation of the conflict since March 2015 has dramatically aggravated the protection crisis in which millions face risks to their safety and basic rights.

Thaibah lost her ability to walk when she stepped on a landmine in 2017. CARE helped Thaibah’s family with cash transfers (288,000 Yemeni Rial, approximately US$530, over the span of six months). Thaibah’s family used the money to pay for the hospital transportation and to buy food.

Thaibah’s story in their own words

I was on the way back home after walking our goats, everything seemed normal. It was afternoon, around 5 PM, on a very hot day in June two years ago, in 2017. Suddenly I felt that I stepped on something but the next thing I know is that I woke up with my friends surrounding me, asking me if everything was ok. I didn’t feel anything. I looked around and there was smoke coming out of the grass. When I looked down on myself I saw so much blood all around my leg. And I saw that one leg was missing.

My neighbors came and they took me to a hospital on a motorbike without even covering my legs. I was praying to god. Still, I didn’t feel anything. But once I woke up from the surgery I felt a lot of pain. And I saw that my leg was still missing. I couldn’t even feel the other one. That was when I knew I was not going to be able to walk again.

Even before I lost my leg, the situation in Al Khor was horrible. There were so many clashes and a lot of shooting. I saw people getting killed when they ran outside their houses. I saw gunfire enter people’s homes. We didn’t have anywhere to go, so we stayed. But once I lost my leg, my parents decided to leave our hometown because they were scared of what else could happen to us. We took some clothes and left. First we went to Al Ramada and stayed there for three months with our relatives. But Al Ramada was too far away from the hospital I needed to visit for treatment and it was very expensive to get there so we moved closer to Al Kahfah. My parents are old and they didn’t have any money to rent a new house. So my mother asked the villagers for help and one kind man offered us this house in which we now live for free. It only has two rooms and we are six people, but at least we have a roof over our heads.

We went to Aden to get a prosthetic leg for me. It was very expensive, it cost around 500,000 Rial (approximately US$ 925). My parents used all of their savings to buy it. They even sold their land and herds. But the plastic was so heavy and rubbed against the stump, constantly infecting it. We stayed in Aden with my brother for two months to find a solution but in the end, I just couldn’t wear it. My other leg was heavily fractured as well. I got so many surgeries but my body wouldn’t accept the metal plate. So the doctors just put my leg permanently in a cast, which they change every two months. Up until today my parents couldn’t cover the cost of my prosthesis, treatments and surgeries.

My parents are old and cannot work but they have two cows left that they raise. My younger brother is the only one who works in Aden as a carpenter and sends us money. But it’s hardly enough to cover all of us, including his two children who live with us. I used to have four siblings, two sisters and two brothers. But one of my younger brothers disappeared when he was 17 years old. He went to work and never came back. Only god knows what happened to him.

Before I lost my leg I used to take care of our herds. We had two cows, three sheep and five goats. I went to school until the fifth grade but then I started helping my parents at home when my older sister got married. I was also promised to someone before my accident happened. But now I don’t know if he will accept me anymore.

Life was better in Al Khor, we didn’t have to rely on anyone. I wish we could return. Now, we live in a house that is not ours and in a village in which we don’t belong. I feel like a burden, which makes me very sad.

Most of my days I just stay inside the room where I sleep with my parents. I can only move myself forward with my arms. I play with my two nieces and look outside the window a lot. That’s all I have left. My biggest wish is to be able to walk again. But I think it’s impossible to realize that dream.