I Am Now More Optimistic About My Future.

18-year-old Loujayn was born in Homs, Syria. Two years into the war and after her father passed away, she fled to Lebanon with her mother and four siblings. “Leaving my life and my friends behind and enrolling in a new school system in Lebanon was very hard. I had to start from scratch and adapt to taking classes in English. I changed three schools before I was able to find the support I needed,” she says. 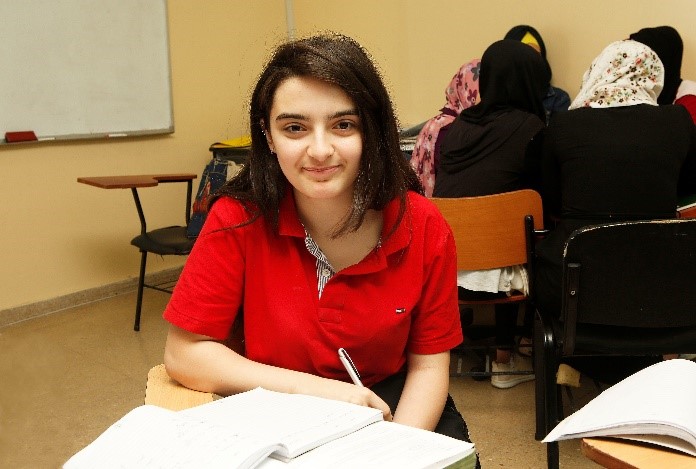 Having missed two years of schooling due to the conflict, Loujayn is very proud to be finishing Grade 9 this year. With a group of 18 other young Syrian girls, Loujayn is preparing for her end-of-year official exams. She is also taking part in the preparation of a video that tells the story of her and her classmates.

Loujayn attends a homework-support workshop organized by CARE in the neighborhood of Bab al-Tabbaneh in northern Lebanon. The neighborhood, where Loujayn also lives, is a Sunni Muslim area that sits next to the Alawite Muslim neighborhood of Jabal Mohsen. The two areas have been home to a recurring conflict between the two religious rival groups since the Lebanese Civil War. More recently, fighting broke out again from the spillover of the Syrian war into Lebanon, between 2011 and 2017. Even in refuge, Loujayn could not escape the tension and violence of her former life in Syria, but the situation has become more stable recently.

The young Syrian woman has attended a series of workshops, as part of CARE’s ‘Positive Pathways to Education’ project, to enhance her problem-solving skills. “I made new friends and learned a lot while participating in the program. We are all excited about preparations for the Graduation Ceremony, which will take place in three weeks, and I am now more optimistic about my future. I hope to become a pharmacist one day.”

The Positive Pathways to Education project targets girls, aged 15 to 18, who are currently enrolled in public secondary schools, with a high socio-economic vulnerability in North Lebanon. The project aims to obtain insight into why only a small group of girls have been able to advance to secondary education. The conclusions of such learnings will allow girls, who are not in formal education or are at risk of dropping out, to explore ways to effectively create and secure pathways into secondary education.

Learn more about CARE's work in Lebanon and Syria.