Philippines  Advocacy  8th Nov 2018
Story by Dennis Amata (Communications & Knowledge Manager, CARE Philippines)
Typhoon Haiyan, internationally known as Yolanda, has become a name that’s hard to forget. The super typhoon wiped out homes, killed more than 6,300 people, and devastated agricultural lands leaving those who survived homeless and without any source of income. But for the people who witnessed its wrath, the only way to move forward was to pick up the pieces and rise.
“What we experienced after Haiyan was unimaginable. But through the years we’ve managed to recover and now we can say we are more prepared for future disasters,” said Yolanda Colbe, a cassava farmer from Carigara, Leyte. 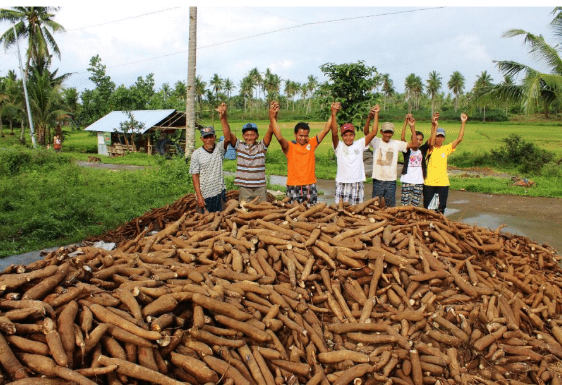 Cassava farmers in Carigara, Leyte shows that recovery from Yolanda is possible through hard work. They are now able to earn from cassava production.
Yolanda, who is frequently teased by her neighbors because of her name, showed determination to get back on her feet five years after the typhoon made a scourging landfall. She is one of the 153,206 people being supported by international humanitarian organization CARE in strengthening livelihoods and preparing for disasters.
“After Haiyan, Leyte and Samar were hit by relatively strong typhoons that also left huge agricultural damage. This hampered the recovery efforts of the affected people who heavily relied on agriculture,” shared Tess Bayombong, Project Team Leader of CARE Philippines.
Bayombong sees the importance of establishing resilient livelihoods, ensuring community participation and partnering with different stakeholders to recover from a major disaster like Haiyan.
Moving forward after Haiyan
The Government of Canada, through the Global Affairs Canada (GAC), helped CARE bridge emergency to development phase through the “Typhoon Haiyan Reconstruction Assistance” (THRA), a four-year project that supports economic reconstruction of the affected people in Leyte, Antique and Iloilo.
Through the THRA project, CARE and its partners are able to support 193 community associations (110 in Leyte and neighboring Biliran) through technical assistance, provision of tools and equipment for their enterprises, and trainings on entrepreneurship, financial literacy, values formation, sustainable agriculture, disaster preparedness, climate change mitigation, gender and development and other industry-focused subjects.
Colbe, who is also a farmers’ association president, shared that they have learned so many lessons after Haiyan. In Leyte, they had to look for other sources of income because coconut plantations were severely damaged. While waiting for coconut trees to fully recover, they find cassava production an equally beneficial alternative given the available market.
“The trainings helped us to mobilize farmers in our community and start improving and expanding our cassava plantations. Now we get to earn from cassava production and help our families,” added Colbe.
Climate-resilient livelihoods
CARE’s assisted community associations in Leyte are now practicing organic farming and applying eco-friendly and innovative agricultural techniques in collaboration with the Department of Agriculture, Philrootcrops and Agricultural Training Institute. Farmers and commodity processors have set up demo farms for other partners to replicate good agricultural practices and learn about intercropping.
Farmers are also using solar dryers for their products, building structures according to “Build back safer” techniques and ensuring that their livelihoods don’t degrade the ecosystem.
A tripartite agreement among CARE, Fatima Multi-Purpose Cooperative (FMPC) and Philippine Crop Insurance Corporation was signed, providing assisted farmers with insurance cover for crops and livestock and personal insurance for both accident and life. This is seen as a risk mitigating measure and a vital step towards resiliency and sustainability.
Meaningful collaboration
Collaboration among humanitarian organizations, communities, donors, government agencies, local government units, academic institutions and private companies is key to achieving resilient livelihoods.
“It is not just CARE’s work. The partnerships we’ve built and maintained greatly contributed to the sustainability of the livelihoods we supported. The complementation of our project with other existing livelihood programs of other agencies enables us to multiply our impact,” shared Bayombong.
After Haiyan, the farmers were organized to form community associations. CARE and its partner FMPC have also facilitated the registration of farmers’ associations with the Department of Labor and Employment (DOLE) so they can access more support from the Government and make business with industrial buyers. Some of these associations were able to prepare proposals and have received equipment, seeds and financial and technical support from government agencies.
“Before Haiyan, we were just producing cassava for household consumption. But after participating in CARE’s livelihood project, we learned that cassava has a market in our province and there’s a big company buying processed cassava,” said Colbe.
Colbe sees more opportunities beyond the livelihood support provided by humanitarian organizations. Because of their hard work, her association recently became a Regional and National Awardee of DOLE’s Kabuhayan Awards, a recognition system under the DOLE Integrated Livelihood Program, and even received additional financial assistance.
The first ever Leyte Cassava Congress, organized by CARE, FMPC, GAC and Philrootcrops, was recently held to link cassava farmers with government agency officials.
About CARE: CARE is an international humanitarian organization delivering emergency relief and long-term development projects with special focus on women and girls. CARE worked since 1949 in the Philippines and is known for its disaster response, emergency preparedness, livelihoods recovery, and integrated risk management programs.
About THRA project: The Typhoon Haiyan Reconstruction Assistance (THRA) project is a four-year development project financially supported by the Government of Canada through the Global Affairs Canada and implemented by CARE in the Philippines. The project supports the economic reconstruction of people affected by typhoon Yolanda in Leyte, Antique and Iloilo.