Coming together for ‘Less work and more harvests’

Samson Woyo is a bit of a star in his community, but he’s adamant his success is thanks to someone else.

CARE began working with him in 2015 through a project [KD1] to improve household nutrition and help families better prepare for harsh conditions in this region of southern Zimbabwe prone to drought and exposed to the impact of climate change.

“Our fathers used to follow the rainfall pattern. It was consistent, it didn’t change. You would know that the rains that would come in a particular month, were the rains we would plant in. Now, if you want to follow the pattern of the rain, it has changed. So if you try to follow it, you won’t harvest anything. It’s no longer consistent, it's changing,” says Chingwanga.

CARE staff note he’s taken lessons learnt to heart and is eager to share knowledge gained with his community. His farm has become a showcase to others to understand how to make better use of limited rainfall, crop rotation, pest management and also taking care of chickens.

Farmers come from this community and beyond to talk to Chingwanga and understand the methods he has taken to become self-sufficient and have additional resources to earn a living.

“Before the project started we lived in poverty, we struggled to buy food, clothing, or send our children to school. We envied those who had the means, who could afford to send their kids to school without being sent back,” he says.

Working with CARE “has opened avenues and it has made us to be recognized in the society that we live in. Now we are happy and we are managing. We now have access to food, we produce our own food, we even get to sell to others since our harvest has improved.”

He is obviously proud of his hard work, but he attributes his success to the woman standing beside him.

Asked to take a photo standing together in front of their homestead, it’s a bit awkward at first. Soon, though, it becomes apparent. These two are very much in love.

Together, they have raised five children and helped support nine grandchildren.

“It's all because of my wife. It is because of her that we are here and have gone this far,” says Chingwanga.

Kumbirai Woyo, 59, admits at first she was somewhat hesitant when her husband started the CARE trainings.

“I was reluctant when the husband would attend trainings and would bring in new ideas that were different from what the family had been socialized or conditioned to believe were the best. I didn’t have the belief we would prosper or do well,” she says. “And now I’m seeing the results. Less work and more harvests.”

Beyond the training in crop diversification and preventing soil erosion, men participate in groups that highlight some of the gender imbalances that exist here and work through how to get past them.

Once a month, men get together to explore these issues and how to better share chores and provide women more latitude to make decisions.

Says Chingwanga, these groups have “helped our marriage in that it has brought a different dimension from the one that we were socialized when we were brought up. The gender dialogues has enlightened us to see women are overburdened time wise. So now I get to help my wife on the household chores.”

“When we were young, it was said that nothing good comes from a woman in terms of ideas, but now I appreciate the ideas that she has and her ideas have brought the success to this family itself,” he says

For example, in the past, if the husband was not there, women could not plant because it was his duty to decide which crops to plant. Thanks to these groups, more women can now decide on the crops and take on other tasks they couldn’t do before in the absence of their husbands.

“I appreciate that my husband holds different leadership roles in the community,” says Kumbirai. “But whenever he is available we get to share the chores that we do and sometimes whenever he goes out and comes back, he can even bring firewood, so that lessens the time I have to spend working, so I now have more time to rest and look after the grandchildren.”

Chingwanga adds that he also looks after the kids when his wife goes off on errands. Through the conversation, his two-year-old grandson tugs at a pant leg and it’s evident they have a tight bond.

Looking ahead, Chingwanga and Kumbirai are keen to build on their success. It’s important they have different means available to them for food and income should one falter or there be a bad season. They would like to work with community members to start a fish farm and also acquire bee hives to make some money selling honey.

They’re hopeful, ambitious, and eager to do this together. 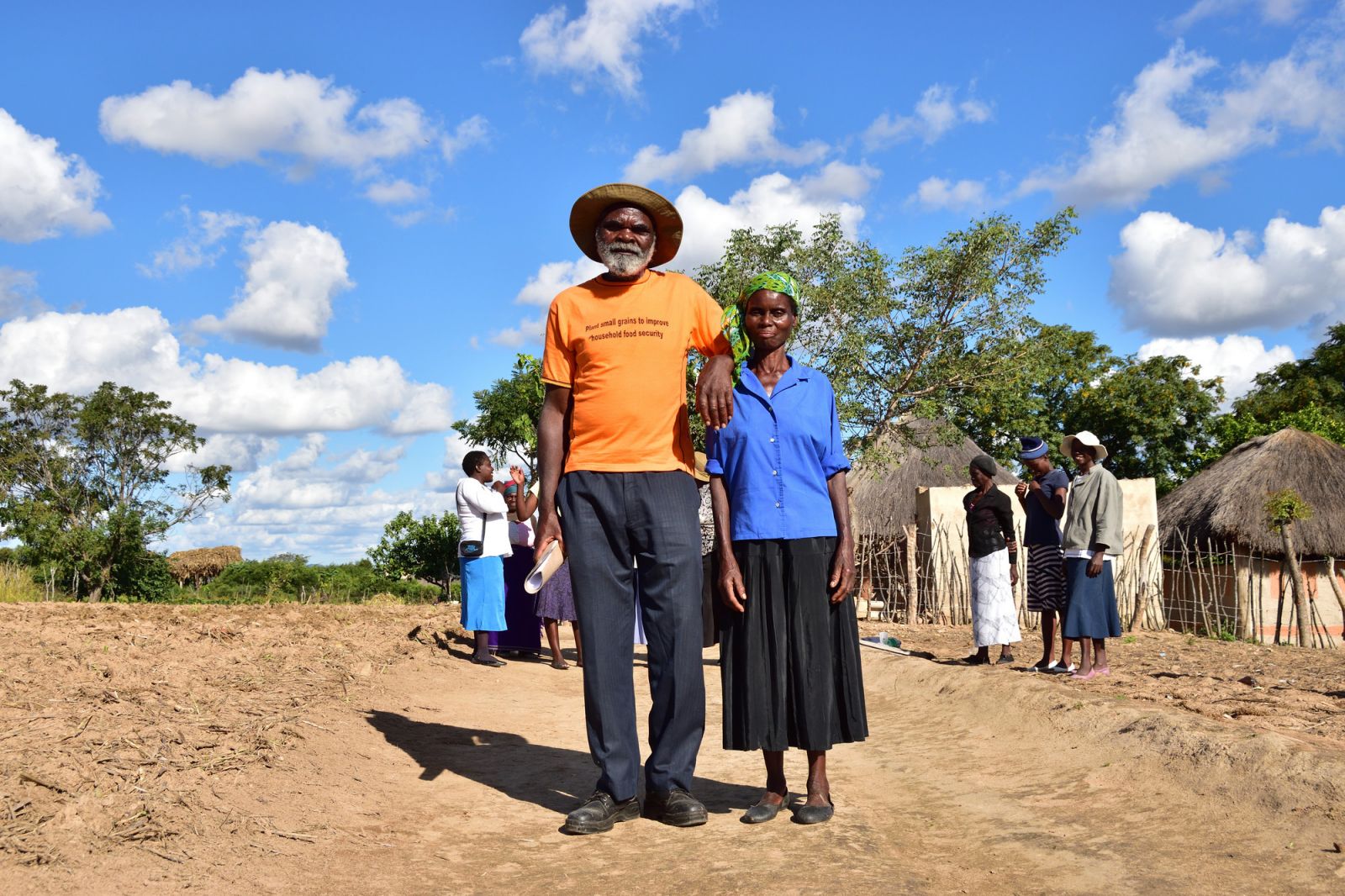