In many places around the world, CARE works with children and youth to promote education and participation. Now, CARE has started an initiative in Germany for young refugees. Marie Pieper, is doing a volunteer year at CARE’s media and communications department and tells about the beginnings of the project:

Last year, 300,000 children were newly enrolled in German schools. They all have one thing in common: They have migrated or even fled from abroad. For many schools, this huge influx represents a challenge. Teachers face totally unknown questions: How to deal with traumatised children? Which culture have they grown up into? What did their lives look like back home? 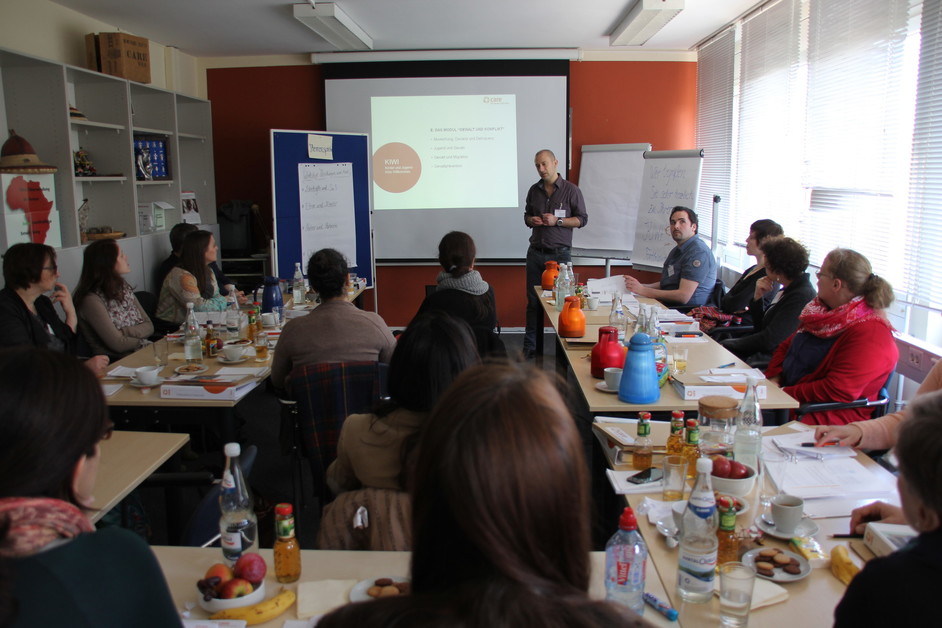 In April 2016, CARE started a project to support refugee children in German schools. The aim is to help integrate boys and girls who have recently arrived in Germany as refugees or migrants. (Leonie Kutz/CARE)

CARE seeks to support schools in overcoming such difficulties and therefore started the project „KIWI“ in January 2016. The term stands for Kultur, Integration, Werte, Initiative (culture, integration, values and initiative) – the competencies CARE wants to encourage in youth. We have drawn from our experience in the Balkans where CARE works with youth to promote tolerance, peace and gender equality. Therefore, we decided to transfer some of these learnings to Germany.

To begin with, our KIWI team set out to train teachers who are responsible for classes including refugee children. As a pilot, we focused on the state of North Rhine Westphalia.  58 teachers from 28 schools took part in these training programmes – we were quite surprised by the demand and interest. All teachers were familiarized with a curriculum dealing with topics such as culture, values and rights, gender roles, violence and conflicts. By offering very practical modules to replicate in class, CARE helped teachers shape their teaching agenda in so-called “integration classes”. In addition to the teachers’ trainings, CARE’s KIWI team also carried out workshops in various schools for students.

I was able to participate in such a workshop in late June. We travelled to the town of Viersen and met with ten students of a so called „welcoming-class“ at a local high school. They talked about their school life and their future career aspirations. „I want to become a car mechanic“, many of the boys said. Doctor, teacher and lawyer were also popular professions named. And yet after their arrival in Germany it is far from easy for these students to realise their dreams. Language barriers are what holds them back most. Thomas Knoll, coordinator of the KIWI Project, explained to every student individually which steps they should take in pursuit of their dream job.

Sure, that road can be long and arduous, but no one seems to be put off by the obstacles. Every student is very diligent in studying German and they have already made a lot of progress. But to keep up with other students and follow the regular classes, their language skills need to still improve. Nevertheless, they all look very determined to me and most importantly, very motivated.

I look around and wonder… One easily forgets what these kids and teenagers have already gone through, what they have endured on their way from war zones through unsafe waters, across danger zones. They fled, they did not have a choice but to leave their beloved home, searching for safety. Some of them grew up in war and haven’t known peace until recently. It deserves our biggest respect that they are in Germany now, showing the ambition to learn our language as well as a profession later on in life.

CARE wants to encourage this ambition: In addition to the teacher trainings and curricula that we offer, we also provide student groups with small cash to realize a project that helps with integration. A few have already been designed and set up: One school built a small hen coop. Boubacar, 16, from Guinea was quite happy to participate: “I had a lot of fun and also put really much work in this coop.“

Another school created a “learning oasis” in their school, a group of students also organized a multi-cultural summer get-together for their school. The boys and girls who now call Germany their home are our compatriots and friends. CARE wants to bring out their full potential and help them realize their dreams.