Bangladesh: Meet 5 GBV activists who are volunteering and leading in their communities 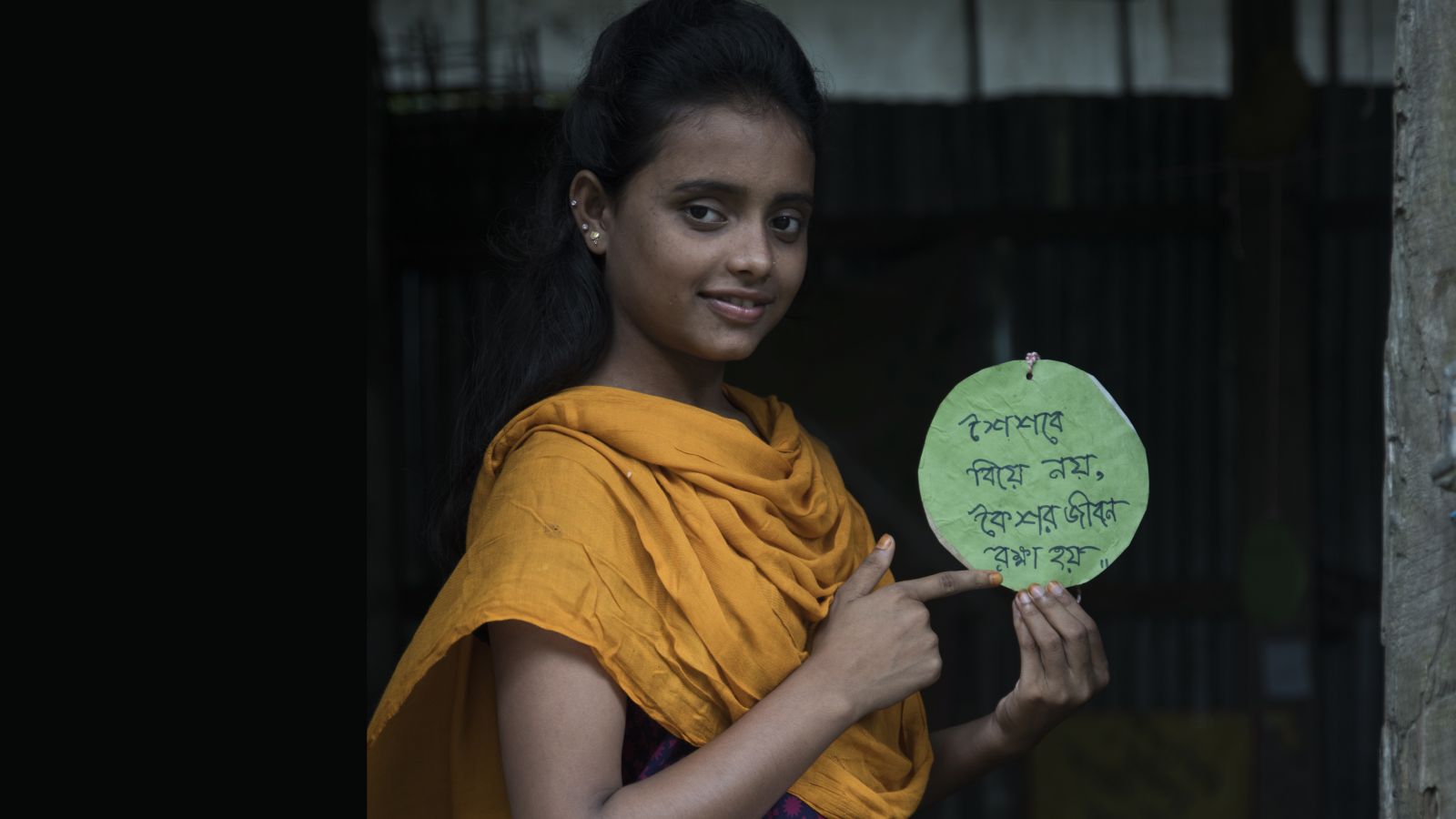 Shammu is carving her own path through social obstacles

The name “Shammu” is an icon in the project Tipping Point. With three other siblings, Maksuda Jannat Shammu lives in Jamalganj union of Sunamganj District in the northeastern Bangladesh. She cannot recollect any memory with her father as he passed away when she was 7 years old. Love, care, strict rules – everything came from her mother. Since her husband’s demise, Shammu’s mother has been the sole breadwinner for their family of six, which was never easy. Despite all hardships, Shammu’s mother continued to support the entire family and managed to send everyone to school.

Shammu was only a fifth-grader when became an enlisted adolescent of Tipping Point project. Her relatives raised a lot of objections to her for just being involved with the project. Despite objections from other family members and neighbours, Shammu’s mother and grandmother encouraged her to be a member of the project. Consequently, there was a negative social hostility about her going out, playing outside and other relevant activities. Eve-teasing, criticism, name-calling, complaints were just a few. Initially, the objections came from neighbours, but when her brothers and grandmother also started siding with the neighbours, Shammu started growing distant with them; despite so, she did not discontinue her ties with the project. Her only support was her mother.

In the year 2017, Shammu passed the exam of 7th grade, but she could not get admission for the next year. Shammu’s mother fell sick from working too hard. Shammu was dropped out of school to attend her mother’s needs. To bear her mother’s medical expenses and family expenses, Shammu’s college-going brother started working as a carpenter. After being treated for a few months, Shammu brought her mother back home. But she was no longer able to work as hard as before; so, the load of the family expenses went to the older brother. Days became even harder. Six months of the year had already passed, and Shammu still wasn’t able to go back to school. But she never gave up as she continued to study at home, However, the time for enrolling for board exam was also knocking at the door. Seeing no other options left, Shammu shared her situation with the project staff.

The project staff discussed the problem with Ending Violence Against Women (EVAW) Forum and through their support, after almost 8 months of the academic year, Shammu got a chance to continue her studies for 8th grade. Since then, Shammu became even more dedicated and sincere towards her studies and the project activities. With her mother’s encouragement, she continued to be an active member for all of project activities (boat competitions, football, and cricket) at district, sub-district and national level without compromising on her studies.

Because of her activities and project involvement, Shammu and her mother had to face immense pressure from the neighbourhood including insulting remarks and other unpleasant situations. But they couldn’t be stopped. In February 2019, the project organized a Combined Cricket Match for adolescents. Over 70% of the villagers openly objected to this arrangement and group of 4-5 people were mobilized to visit all the households and discourage this event; the remaining 30% of the villagers agreed in silence. In this situation, only Shammu’s mother openly expressed her opinion in favour of the event and encouraged boys and girls to take part in this game. Despite all obstacles, the event was organized. However, the aftermath was disturbing. The boys and girls who took part in the event were shunned by the local mosques from participating in Arabic studies; Shammu’s younger sister was one of them. Most parents requested the mosques and the religious teachers to take their children back; but Shammu’s mother said, “If the teachers won’t take her back, no problem. I will give her the teachings she needs; from the knowledge I have.”

In the beginning, such a negative attitude from the neighbours used to hurt Shammu’s feelings, but now this has become the norm for her. In this early age, Shammu has realized that her mother is her sole supporter to fulfil her life’s dreams. People will always create obstacles but she has to pave her own way through this. Although few people silently support her now, she hopes for a day when they will also actively support her and stand next to her to become a part of her struggling journey. 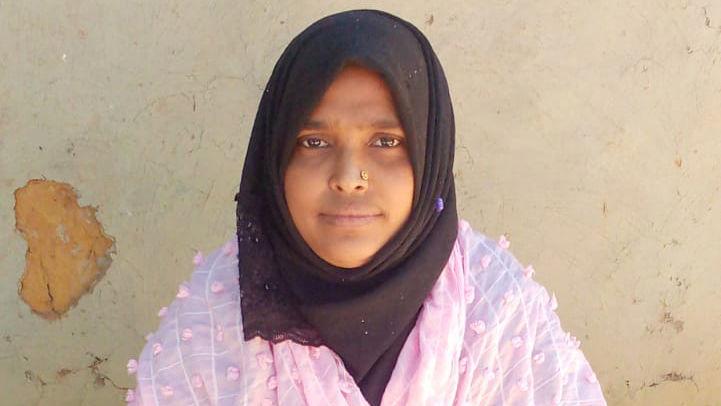 Sufia is ensuring lasting change in her community

Like other women in the village, Sufia, a mother of two children was an ordinary woman living in Khutakhali union under Chakaria in Cox’s Bazar, Bangladesh. She got married when she was only 16 years old and her husband is an immigrant in Malaysia. She was a bit different from others and always aspired to do something for her own community people. Sufia is a community woman who participated in court-yard meetings facilitated by CARE volunteers. She came to know about two-day Life Skills and Livelihood Training through the community volunteers of CARE Bangladesh’s GBV project. When she came to know about this training, she was very keen and wanted to join the training.

Initially, she took part in the two-day long training and later two hours’ session as a participant. She gained knowledge on various aspects of life skills and about Gender-based Violence from the training. “This is a life changing training for me,” says Sufia. She shares that this has been a life changing experience for her and now she actively participates and raises her voice against any type of wrong doings in the community. “I believe I can do something for the community women and girls. Since the training, I’m orienting community people about the negative impacts of GBV while also informing them about the available services for GBV survivors in Khutakhali union health facility”, adds Sufia. 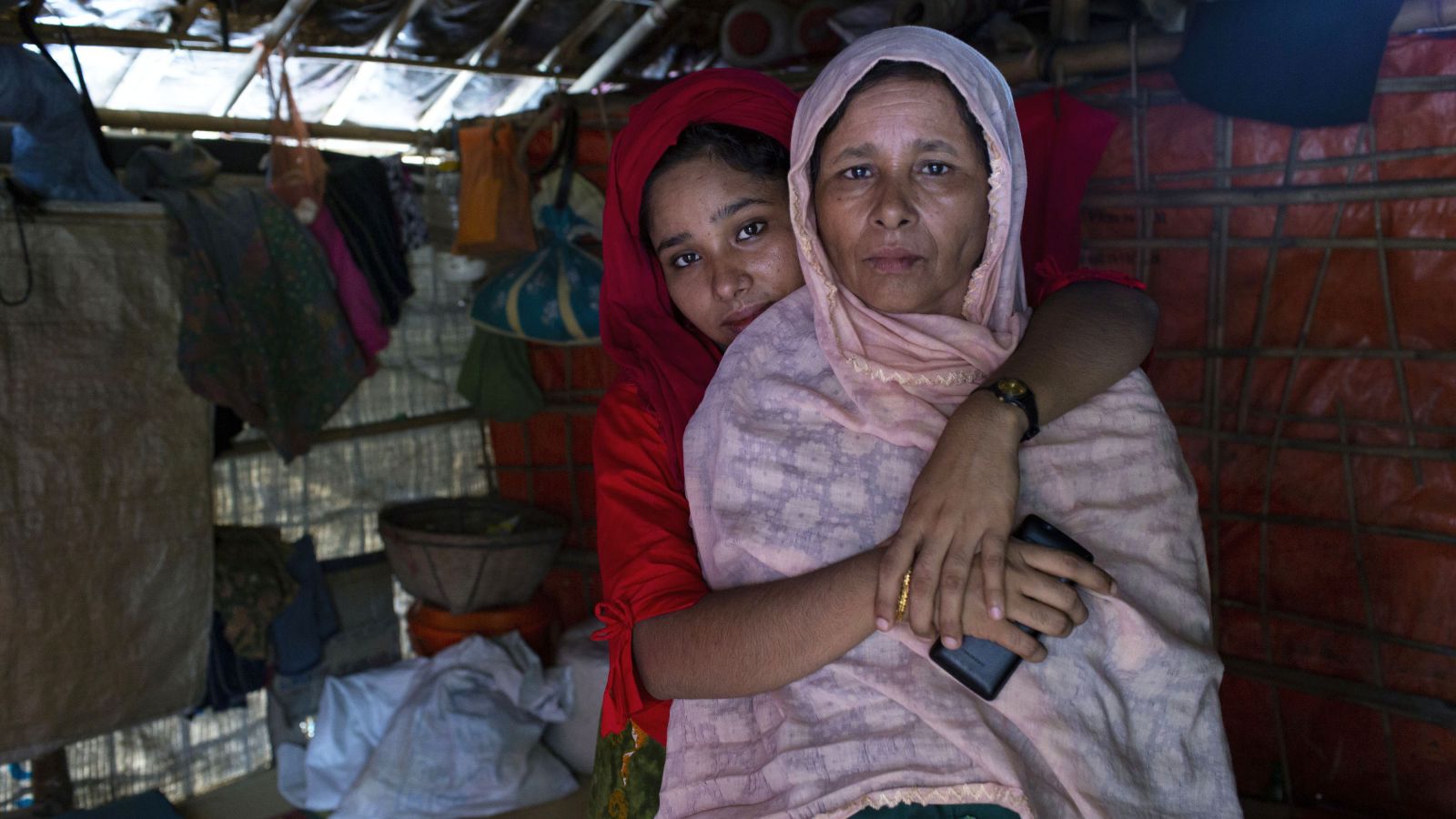 Solima’s family is united after two years in Bangladesh

Solima Begum, 43, who fled from Myanmar to Bangladesh about three years ago. She is an active member of Shantikhana* and tries to implement the learning from this centre in her daily life. At Shantikhana, she learns about family planning, preventions for COVID-19, hand- washing, natural disaster, human trafficking, self-care, health & nutrition, menstrual hygiene management, polygamy, GBV related issues and much more.

In the camp, Solima lives with her daughter Julekha Begum, 20 and her 6-year-old grandson Ansar Ullah. Solima was separated from her family while travelling to Bangladesh from Myanmar. After living in the camp for almost two years separately, they were united and they all have been living happily in the camps for the past one year now. 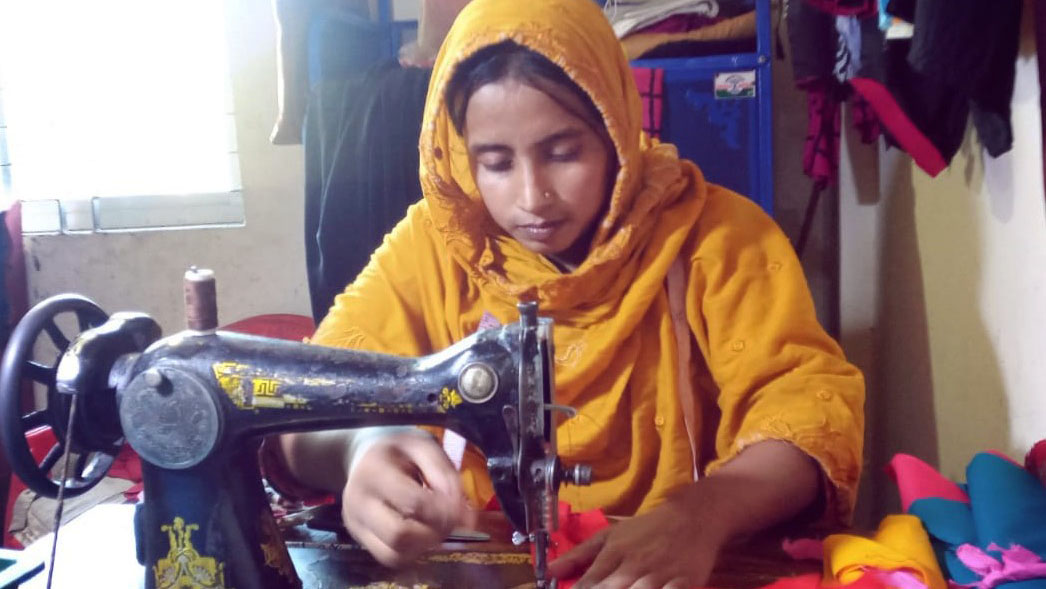 Humaira is more confident as a woman than before

Humaira Begum (30) is married to Mohammad Yunus and they live in Maheskhali, Cox’s Bazar. They have two sons and a daughter. Yunus works as a day labourer and his income fluctuates based on the availability of work and so Humaira works as a local seamstress and supports the family. Humaira recently attended a two-day long training course on Life Skill and Livelihood offered by CARE Bangladesh under GBV project.

According to Humaira, Life Skill and Livelihood Training have brought changes in her life. “Previously, I did not have a clear concept regarding physical, psychological and sexual violence experienced by women and girls. While undergoing through training, I have been oriented on different forms of violence”, she said.

“I am more aware than before. If I notice any incident of violence against women or girls in the family or in the neighbourhood, I will certainly protest. I am going to link victim with services extended by CARE Bangladesh and also help victim access services”, she added.

She does not distinguish between her sons and the daughter. She rather pays attention to improve the nutritional status of both male and female members of the family. She is determined to ensure that her daughter has the opportunity to pursue education and doesn’t get married early. 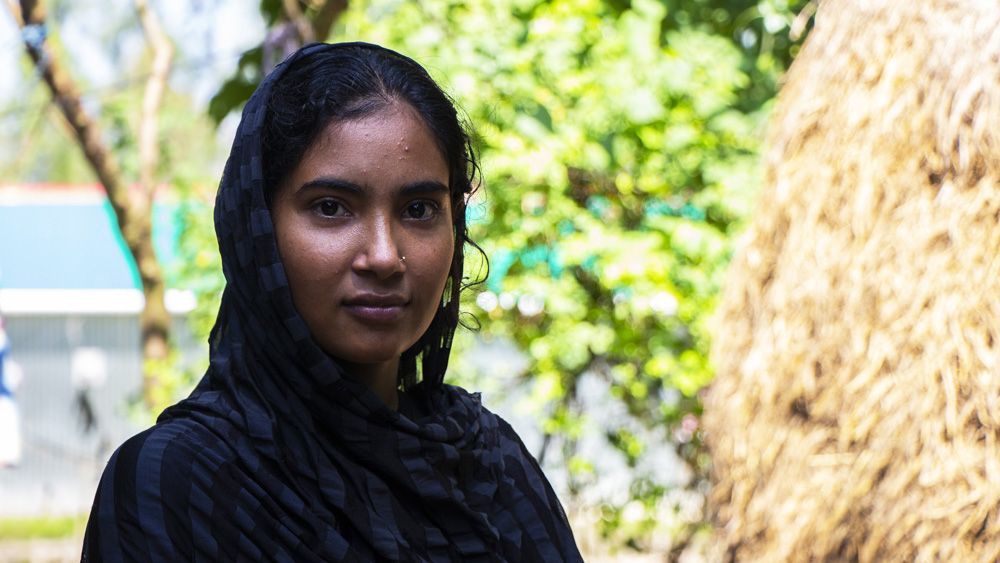 Knowledge of rights has empowered Priti

Poverty forced 17 years old, SHOUHARDO III adolescent girls’ group member, Priti from Kishoreganj to drop out of school while studying in class 5. As she took on the role of the group leader at the Rangpurhati village adolescent girls’ club, she was nominated to receive training on how to make beaded handbags as a part of SHOUHARDO III and Department of Women’s Affair agreement for skilling up school dropout girls. She received a three-month-long, non-residential training and BDT 6000 (USD 70.79) to help her start making handbags. She could bring in an income of about BDT 500 to 600 (USD 5.90 to 7.80) a month by making these handbags and resumed her studies.

While she was perfectly happy with the way things were going, her family arranged her marriage soon after. Being a part of the adolescent girls’ group, she was well aware of the imminent dangers she could be facing if she gets married before the age of 18. She didn’t succeed despite trying her best to convince her parents to delay her marriage. She knew she had to take steps to stop her parents from pushing her toward being a victim of child marriage. Priti shared, "I went to my class teacher, who contacted the local Union Parishad member to stop my marriage.”

After a long 18 to 20 days of negotiation, her family finally had to step down and vowed to marry her off, only after she turns 18. Priti says, “Women in this society will continue to face obstacles. We just need to be bold and stand up for what we want in life.” 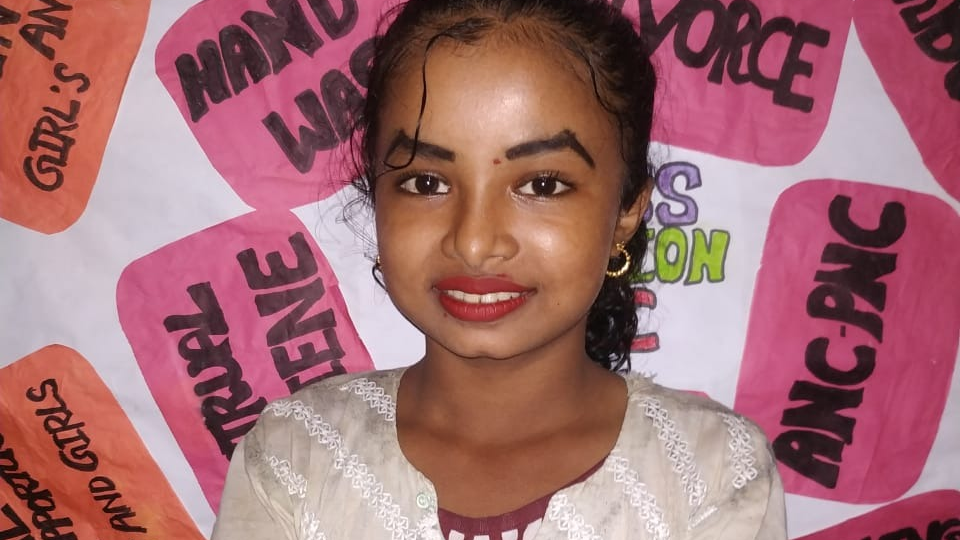 Jannatul aspires to change her community

Jannatul Mawa is a bright and enthusiastic 12-year-old living in the Rohingya refugee camps in Cox’s Bazar, Bangladesh. It's been almost three years since they arrived in Bangladesh to escape the communal violence in Northern Rakhine state of Myanmar. She has three more sisters and four brothers. To them, the memories of escaping to Bangladesh seems like a bad dream that is starting to fade. Jannatul now happily spends her day going to school for formal lessons, applying make-up, cooking and visiting the Shantikhana*.

Jannatul started going to Women and Girls’ Safe Space (WGSS) after she was introduced to this place by her friend in the camp. She enjoys going to this place because it is a great space for girls like them to engage in fun activities and also learn about many important aspects of rights and dignity, including menstrual hygiene management, child labour, abuse, early marriage and gender-based violence. “I was not aware about abuse and violence, I did not know which is abusive and violating behaviour, and which is not. But now I do. I know about these things and I try to share this knowledge with my friends. Now I am confident and able to do many things like giving awareness session in my community; I conducted awareness sessions in my classroom too. From WGSS, I have learned about many things which are important for our life and for our community. I hope to continue these activities and complete my education until 10th grade.”, shares Jannatul.