“As a Refugee and as a Woman, I Have Learned that We can do Anything”

“Back in Syria, everything was different. My husband was working and I had the time to take care of the house and my children,” recalls the 37-year-old woman from Aleppo. “But now, I have to be both, the father and the mother”. It was seven years ago, when Yara*, her husband and four children arrived from Syria in Turkey and finally felt that they would be able to live a decent life again, when her husband got injured in a car accident. Ever since then, Yara has become the sole breadwinner and caretaker of her family, while her husband is unable to work because of the injuries he suffered.

“It is difficult for me to work on the farm under the hot sun every day, but at least things are getting better and I can provide for my children,” she explains. Yara lives close to Islahiye, a small town in the Gaziantep Province, close to the Syrian border. Every day she wakes up at 5 in the morning to go to the farm. Together with other refugees, women and men from Syria, they work in groups, growing green peppers. In Islahiye, the temperature during the summer can reach up to a blistering 55°C.

“At 7 in the morning, I come back from the farm to take my children to school and then I go back to work until 4 in the afternoon. Then I go home to cook and take care of my husband. It is exhausting, but if you don’t work here, you cannot put food on the table.” 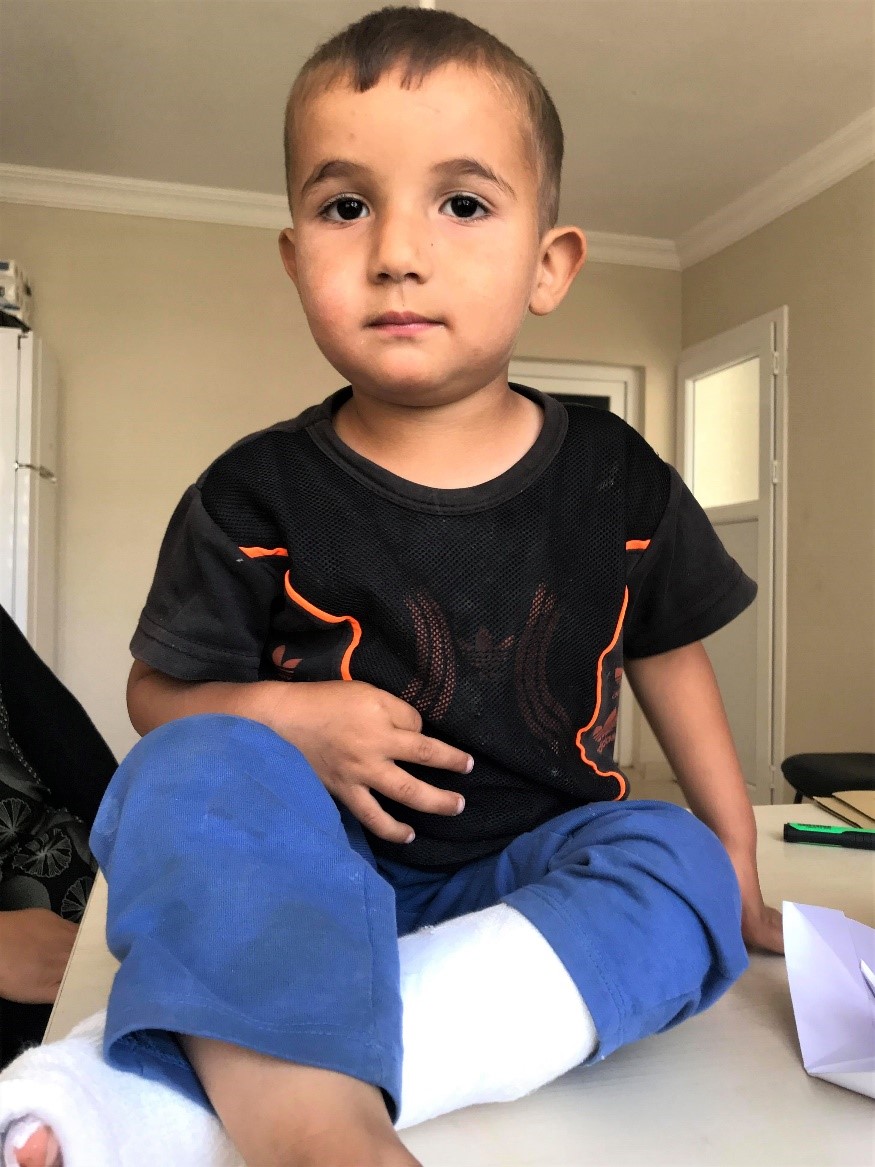 “I don’t know if my house is still standing in Aleppo. We left our home eight years ago and went to Afrin for one year, but it was not safe. How could I raise my children in the war?” says Yara, looking at her six-year-old boy, Firas*, who is in her arms, with a cast on

his leg. She explains that a brick from the broken fence outside their house recently fell on his foot. Unable to move, he is really irritated and constantly trying to get his mother’s attention. He sometimes sings, other times pretends to hold a gun and even makes noises to imitate gun shots.

Yara also has an 11-year-old son and two daughters, an 8-year-old and a 13-year-old. “My children were very young when the war started. I don’t think they have memories of Syria before the war. We had to move several times before coming here. And despite the difficulties, I have to admit that things are better here. Yes, I am very tired, but at least I have a job, my children are going to school and we have access to health services.”

When refugees started arriving in Turkey in 2011, many rented warehouses previously owned by farmers in agricultural areas along the Syrian-Turkish border or slum-like dwellings in urban areas which are mostly unsafe and unhealthy for their inhabitants. In 2017, based on an assessment conducted by CARE and other aid organizations, it was found that in Gaziantep, 60% of refugees share housing units and 10% live in dwellings not intended for residential use like garages or shops. To make things worse, nearly all refugees do not have rental agreements or legal tenancy to their housing units, which increases the risk of rental increases and eviction. There are cases in which the housing is not secure at all and often lacks basic facilities for the kitchen and bathroom, such as running water. These houses also tend to not offer sufficient privacy to women and girls, as a cultural norm within families.

When Yara learned about CARE’s Cash for Shelter program, she immediately applied. “As soon as I heard about it, I came to CARE’s office and registered.” CARE’s Shelter Project focuses on rehabilitating the interior and exterior common areas of a house, taking into account any gender-specific needs and opportunities to increase its safety for everyone. The tenants discuss what they need to change and improve in the house and CARE’s special team helps them throughout the process.

“With the money I received from CARE, I changed the doors in the house and installed locks on the exterior doors. We also fitted a door for the bathroom to be able to use it or take a shower. We did not used to have any privacy before that. Recently, we set up mosquito nets as well,” says Yara, describing that due to the number of farms in the area, mosquitos were a big problem, especially for her young boy. “The last thing I want to do with the rest of the money is to fix the fence around the house. I want to make sure that Firas can play there again without being in danger.”

“Through everything I have been through as a refugee and also as a woman, I have learned that we can do anything. I learned that women are strong, but we often struggle to provide for our families, especially when we are on our own. My only wish is that the war in Syria will be over and that one day, we will be able to go back home, to live in peace again there. I also hope I will soon get some more sleep and find a way to rest for a while.”

*Names have been changed to protect the identity of individuals.

Learn more about CARE's work in Turkey and Syria.