Aminata Kalokoh: A Story of Survival, Uncertainty and Hope

Continuous rain had caused a massive landslide and flashfloods at the dawn of August 14. It wreaked havoc on the lives and properties of people living along the river in Freetown, Sierra Leone. Approximately 500 people perished, yet many more are missing, and bodies are still being unearthed and recovered from piles of mud. CARE Sierra Leone was one of the first humanitarian aid organizations responding within hours after the disaster, distributing relief goods such as hygiene supplies, household items, blankets and food to survivors. It was a systematic distribution effort: CARE teams identified and verified beneficiaries, coordinated with the Office of National Security and the Ministry of Social Welfare and with other aid organizations who was were also active in the area to sync and avoid duplication the of aid.

Aminata Kolokoh was one of the first survivors who showed up to collect relief supplies from CARE. At first glance, the 18 year-old survivor Aminata Kolokoh stood out: she seemed to be the day’s youngest beneficiary, hence one would ask if she was there to represent an elder family member or possibly her parents who could not come over. Aminata confirmed her identity and exclaimed: 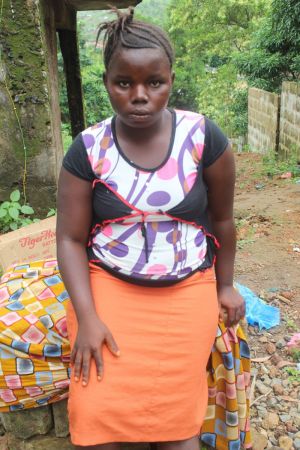 “I lost my family”

Holding back tears, she added with a sorrowful uncertain brazen look of a lost women that cuts deep into one’s soul:

“I lost 21 family members in the flashflood”.

Then her eyes spoke of untold stories --- stories of grief over the loss of loved ones; of life’s uncertainties as she suddenly found herself alone coping and surviving; of pain that she endured while fighting for life in the raging water that treated her like a fragile piece of paper ready to be crumpled and crushed any time.

As she stood to collect her goods, Aminata tried to display strength. I surmised it was something she had to do, because being strong was the only choice she had. After a short while, her own emotions gave in. Like a lost child looking for her mother, she wept. As she struggled to hide her pain, she covered her face with her two bare hands and muttered again: “I lost my family”.

A tight hug--- that was all we could offer during her moment of intense grief, hoping that a hug would somehow reverberate to ease her pain. At the back of our minds lingers a question--- how many Aminata Kolokohs are out there?

A Thriving Sense of Humanity and Friendship During Calamity

As CARE expanded its relief distribution the following days, Aminata showed up again. Surprised, I asked: “How did you know that we are here?” She beamed saying that she saw CARE’s Emergency Response Team on her way downhill. Her first thought was to come over to thank CARE for the relief goods she received.

Gesturing towards an area where we could sit down on a pile of hollow blocks, Aminata walked, limping. She removed her wrap-around--- a clothing material she received from CARE--- to cover our seats from dirt. “The hospitality of a you women”, I mused smiling.

As we chatted casually, I noticed that there were times where she had to hold her chest while talking. This became laborious whenever she coughed. I asked why she had to hold her chest, and she showed me her still-fresh looking wounds in the breast area, abdomen, right thigh and left leg--- wounds reminiscent of the tragedy on August 14. And I knew then why she was limping. Aminata was undoubtedly in pain. A young woman of tremendous strength for having lived through, coped, and still coping with excruciating pains that go beyond the physical. Aminata knows however that the path to rebuilding her and her father’s – who luckily survived --- livelihood. She is extremely aware her lack of education is an impediment to get her into the job market. She also knows that she cannot get medical attention for her chest pain and her wounds as she does not have the financial means.

With a frozen gaze towards the horizon, punctuated by a heavy sigh, Aminata said she did not expect August 14 to be such a tragic day for her life. She lived with 21 family members, including five brothers and two sisters in a two-bedroom house downstream along the river bank. “Everyone slept that cold night”, she reckoned, “and I was, without warning, swept away into darkness by the raging water. It happened too quickly”. She remembered being hit by sticks and hard objects; she remembered clinging onto a “big stick” until daylight when a soldier from the rescue team pulled her out of the raging water. She has been out in the water for four hours, soaked and shivering, until her rescue at around six o’clock in the morning.

Asking her where she lives now, Aminata points downhill and says, “I live with my friend somewhere there”. She then called and introduced her friend, 15-year-old Marie Jakole. Marie said she saw Aminata loitering in the area and learned of her tragic story. Marie decided to take Aminata home to live with her family. 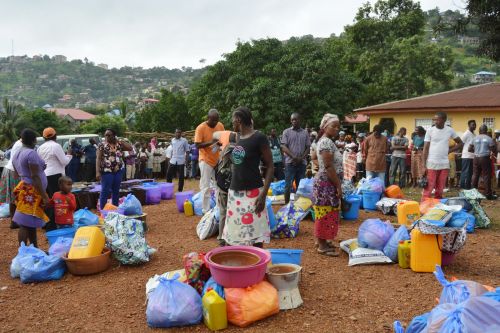 As humanitarians, we must work together, our collective efforts can change lives. We can ensure the recovery and welfare protection of an Aminata Kolokoh. An Aminata Kolokoh will have psycho-social counselling, medical, education, shelter and livelihood recovery needs, among others.

For more on our work in Sierra Leone, click here.