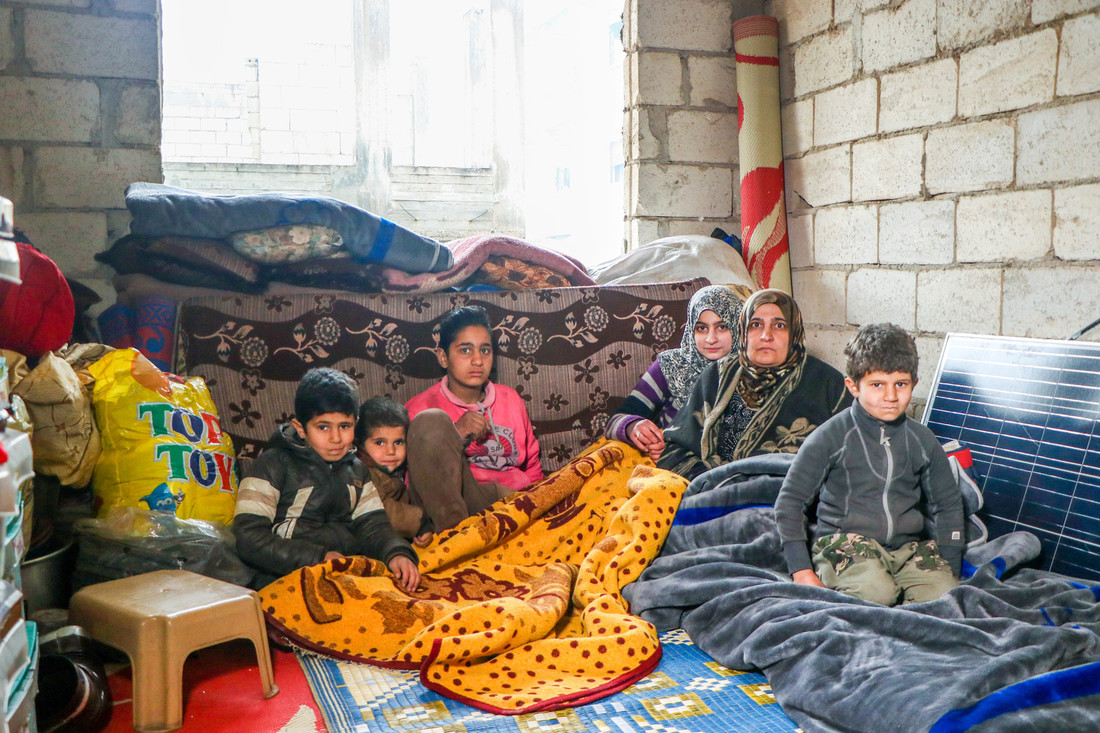 Photo: Nesreen* is 44. Her husband died years ago and she became the one responsible for her five children. Due to the military escalation, Nesreen and her children have been displaced from the southern countryside of Idlib further north, and now they are staying in a room within an open house. IHSAN/CARE

Syrians who have already endured almost a decade of war and displacement are now facing unprecedented levels of hunger leaving millions of people acutely vulnerable to Covid-19, international agencies warned today ahead of a key annual conference on the crisis.

Covid-19 restrictions, the collapse of the Syrian pound, and the displacement of millions of people have led to an unprecedented number of families in Syria who are no longer able to put food on the table or make enough money to afford basic necessities. A staggering 9.3 million Syrians are now going to sleep hungry and more than another 2 million are at risk of a similar fate – part of an overall rise of 42 per cent in the number of Syrians facing food insecurity since last year.

Hosted by the EU and the UN on 30 June, the Brussels Conference aims to raise funds and agree on policy changes that will help Syrians inside the country and in the region. The agencies Oxfam, Humanity & Inclusion, CARE International, World Vision International, International Rescue Committee, Mercy Corps, and the Norwegian Refugee Council warn that unless funding and humanitarian access are increased, many Syrians, including those living as refugees in the region, will be pushed to the brink of starvation. Almost a decade of war has thrown Syrians into a spiral of despair and destitution that keeps worsening every year. International assistance is needed now more than ever.

In the northwest, a Turkey-Russia mediated ceasefire faces a bleak fate, with fighting and aerial bombardments reported since May. Home to over 4 million people, many of whom have been displaced multiple times, Idlib and northern Aleppo governorates face a potential catastrophe if there is a Covid-19 outbreak. Many live in squalid makeshift overcrowded camps or sleep out in the open. Water is scarce, and the health and civilian infrastructures are decimated. In recent weeks, a new wave of violence in southern Idlib has forced hundreds of families to pack up their few belongings and leave their homes and tents once again.

In the northeast, the first cases of Covid-19 were confirmed over a month ago, and with it concerns over a lack of preparedness remain high. Lack of Covid-19 testing capacity, chronically understocked health facilities, and the main water pumping station - servicing 460,000 people - regularly being out of commission, continue to be the daily reality. Like in the northwest, taking measures to prevent the spread of Coronavirus is especially difficult in the many overcrowded camps and informal settlements across the region.

In government-held areas, as in neighbouring countries hosting refugees, Syrians are facing the reality that the threat of Covid-19, the inability to work and the spiraling economic decline in the region is making their situation harder than ever.

International agencies are calling on global leaders to scale up financial support in comparison to previous years for Syrians in their country and those displaced in the region so that they can have a chance not only to survive, but to rebuild their lives in safety and dignity. We also call for the United Nations Security Council to renew the Syria cross-border resolution for northwest Syria for a period of 12 months and to re-authorize access to northeast Syria to ensure that vulnerable people are able to receive lifesaving assistance. More access to those in need is crucial right now so that the humanitarian community can support families as they struggle through the pandemic and the economic crisis that is sweeping across the country.