Over 1 million people at risk of hunger in Syria if cross-border aid resolution not renewed, say aid groups 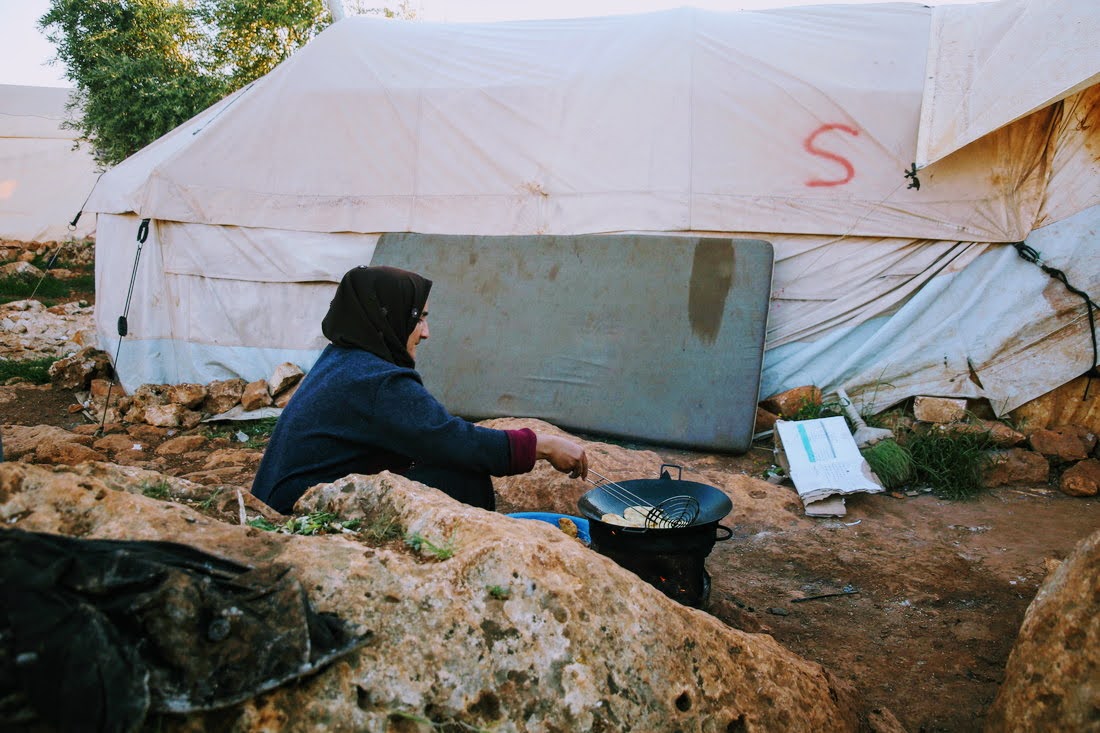 Photo: Dalia*, a displaced woman from southern Idlib fries bread for Iftar. She uses nylon and cardboard to light the fire outside her tent. “I am not used to this. This is not something we had to do I was living in my home in the village before displacement,” she says. SRD/CARE

Thursday, 10 June 2021 - Aid agencies are warning of a looming humanitarian catastrophe if the UN Security Council fails to renew a resolution allowing lifesaving aid delivered cross-border to reach Syria. The resolution is set to expire in exactly a month’s time on July 10th. NGOs are warning that a failure to renew would put access to food assistance for more than one million people at stake, as well as COVID-19 vaccinations, critical medical supplies and humanitarian assistance for many more.

A group of 41 NGOs are warning that the provision of food supplies would be impossible to replace at the scale offered by the UN, which would be forced to stop operating if the resolution is not renewed. The World Food Programme provides 1.4 million Syrians with food baskets each month through the Bab al Hawa crossing. If the Security Council fails to support a renewal, these supplies would run out by September 2021. NGOs estimate they only have capacity to scale up to meet the needs of 300,000 people, leaving over one million without food assistance.

A failure to renew the resolution would also put a halt to the UN-led COVID-19 vaccination campaign for people living in North West Syria, where there have been at least 24,257 confirmed COVID-19 cases and 680 reported deaths[i], amid a spike in infection rates in the last month. The actual number of COVID-19 cases is likely higher due to low testing capacities.

Northwest Syria received its first batch of coronavirus vaccines through the Bab al Hawa border crossing at the Turkish border last month, but the continuation of this campaign relies on renewing the UN resolution, agencies said.

In the North West, there are 2.8 million people in need of humanitarian assistance that can only be reached cross-border. The majority are women and children, many of whom have been displaced multiple times, as ongoing cycles of fighting have left no reprieve. In 2020, the authorization of cross-border assistance allowed humanitarian organizations to reach over 2.4 million people in need a month in the North West, including food for 1.7 million people, nutrition assistance for 85,000, and education for 78,000 children.

After ten years of conflict, the number of people in need across Syria are at their highest ever levels, growing 20% in the last year alone. Syrians are contending with record levels of food insecurity and economic hardship, ten years into the conflict. They now face the added risk of COVID-19, which continues to spread at an alarming rate while the healthcare infrastructure, decimated by years of conflict, remains woefully inadequate to respond.

Despite increasing needs, the Security Council has voted twice over the past 18 months to restrict humanitarian access to the country, leaving just one crossing for life-saving UN assistance to reach North West Syria, and completely cutting off UN cross-border assistance to the North East, with dire consequences.

NGOs warn that reliance on just one crossing point to the North West, following the removal of the Bab al Salam crossing by the Security Council in July last year, puts ongoing aid access and a successful COVID-19 vaccination campaign to the region at risk. Despite a ceasefire agreed in March 2020, just three months ago the one remaining crossing, Bab al Hawa, came under attack, causing damage to NGO warehouses and humanitarian supplies. Ongoing violence could cut off the only remaining access to food, vaccinations, and other critical supplies for people in North West Syria.

NGOs point to the fall out of the Council’s decision in January 2020 to restrict the UN’s access to North East Syria through Al Yarubiyah as an important lesson of the fatal consequences such decisions have. Since the border has been closed to the UN, only a handful of medical shipments have made it to the region through alternative routes, with health facilities consequently facing stock-outs of special medicines, such as insulin and resources needed to tackle COVID-19 such as PPE and ventilators. In Al Hol camp, NGOs have reported that approximately 30% of patients with chronic diseases cannot be covered through the medication available in the camp.

NGOs are calling on the Security Council to reauthorize the cross-border resolution for another 12 months, and to reinstate the closed crossings, Bab al Salam in the North West and Al Yarubiyah in the North East, to ensure Syrians in need, wherever they are, can access life-saving aid and humanitarian actors are able to respond effectively to the COVID-19 pandemic.

Inger Ashing, CEO of Save the Children International said:

“After ten years of conflict and displacement, and now COVID-19 driving an economic crisis, an unprecedented number of children in Syria are battling hunger and malnutrition. And the numbers are rising, as parents lack access to fresh food and are left with no choice but to cut out meals. Children run the risk of their growth being stunted, which can impact their ability to learn and potentially increase the risk of depression or anxiety.

“The Security Council has an obligation to ensure aid continues to reach some of the most deprived families in the world, and not put politics above the lives of people as we have seen happen too often in the past. A failure to renew cross-border assistance for Syria is an abject acceptance of human suffering and entirely avoidable loss of life.”

The UN Security Council has failed the people of Syria for too long -- but the Covid crisis gives them the perfect reason to change course. Now is the time for humanitarian realities on the ground to drive determined and effective Security Council action on Syria. The humanitarian case for cross-border assistance is more obvious today than ever before, with over 13 million Syrians in need – a 30% increase since 2014. Syrians are worse off by nearly every measure than at almost any other point in the past decade. 81% of people in the northwest and 69% in the northeast are in need of aid. Malnutrition in children under five is skyrocketing.

"Syrian people need more aid and more humanitarian access- not less. We look to the Security Council to ensure that this vital cross-border lifeline is extended. The authorization of Bab al-Hawa, Bab al-Salam, and Yaroubiya for 12 months would help ensure aid - including food assistance and essential medical supplies - reaches Syrians experiencing the most acute needs via the most direct routes.  The evidence is now in and action is now needed. There is no time for excuses.”

“Having shown incredible resilience these last ten long years, Syrians today stand at a breaking point. Drought, the COVID pandemic and greater economic instability add yet more risk factors to an already toxic cocktail of ongoing violence, protracted displacement and personal trauma. Syrian women face their biggest survival challenge: in Northeast and Northwest Syria they tell us that the collapsing economy and soaring food prices are forcing them to sell their belongings and reduce the number of meals they can give to their children each day.

As we continue to battle COVID-19 globally, now is not the time to scale back the crucial supply of cross-border aid delivery that Syrians are wholly reliant upon. We urge the Security Council to uphold its responsibility and ensure Syrians have sustained access to life-saving assistance by reauthorizing all three border crossings without delay. Without the renewal of the cross-border resolution, we will face a humanitarian catastrophe.”

“Since 2014, the UN cross border resolution has made it possible for lifesaving food, water, and medicine to successfully reach Syrians in need through the most expeditious routes possible. It would be imprudent, short-sighted and unacceptable to change course now, when a global pandemic and skyrocketing food insecurity threaten millions of lives across the country. Sustained humanitarian access inside Syria is needed now more than ever. Failure to renew this important cross border mechanism will have catastrophic consequences for millions of people.”

Rahma Worldwide for Aid and Development

The Syrian Center for Media and Freedom of Expression (SCM)

Violet Organization for Relief and Development

Life for Relief and Development

[i]   Numbers as of June 7th from the EWARN Task Force