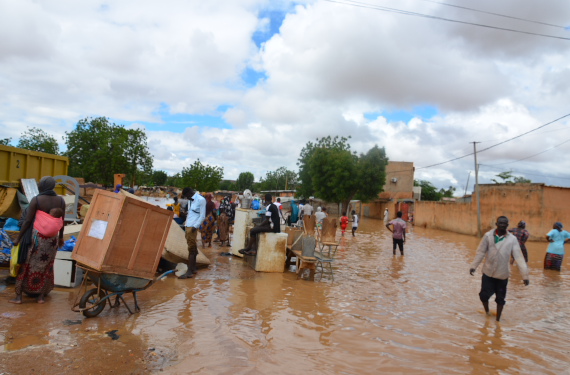 NIAMEY, 14 September 2020: Severe floods caused by torrential rain in Niger have caused death and destruction of property across the country, affecting 432,613 people, and leaving them in need of shelter, water, food and essential items.

65 deaths have been recorded. About 36,155 houses have collapsed and 8,989 hectares of farmland destroyed. Maradi, Agadez and Niamey are the most affected regions. In 2019, at the same time, 66,434 people were affected across the country.

The floods have caused the Niger River, dams and dykes to burst and huge volumes of water to engulf people’s homes, farms and other buildings without warning.  In the capital Niamey, where CARE Niger is headquartered, whole neighborhoods are underwater.

CARE teams are on the ground and responding in Niamey by providing cash transfers to try to help up to 750 households to be able to buy food and other essential supplies. It is also supporting sanitation by building mobile or temporary latrines for people sheltering in public buildings, including the provision of gender-sensitive toilets for women and girls.

"Today, compassion and solidarity should be prevailing words from us, for every one of us is affected by this flood, whether by far or near," said Care Niger Country Director Ely Keita at a cash distribution of 60,941 US dollars (33,750,000 FCFA) to 750 households affected by recent flood in Niamey.

The Niger government’s initial response to the crisis included authorizing temporary resettlement of displaced people in classrooms and distributing food and non-food items. However, there is still an unmet and rising need for food and materials such as sleeping mats and bedding, mosquito nets, cooking equipment, water storage and tarpaulins, and many people have nowhere to go. And as schools prepare to reopen, many people will be forced to find other places to shelter. 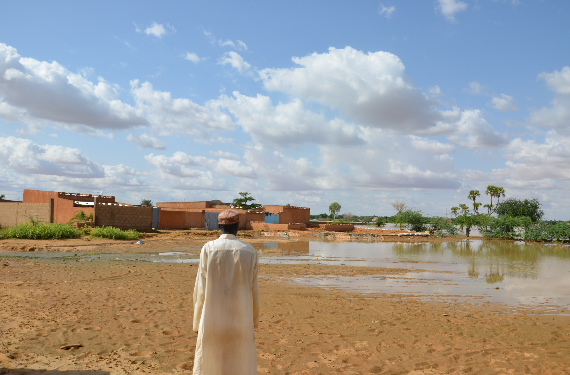 Photo: CARE is responding with cash distributions to some of the worst affected in the capital Niamey.

“We could no longer stay in our houses, the walls fell down, and the water was rising from under us. You can see our stuff parked in the classrooms, everyone here has nowhere else to go, and now we're being asked to leave the premises,” said Zalika Saadou, a 55-year-old spice seller who lost her home and shop in Niamey’s Karadjé neighborhood to flood waters.

“So where can we go now? Family and friends that we would have asked to stay with have also been flooded, so what can we do? Should take our things and go back to our flooded homes?” asked Saadou, a widow and mother of 11.

“There is nothing in our power that we can do now. We are only waiting for providence, to see what happens,” she said.

“All the houses fell down and the cement houses are full of water, today no house is in good state. Our house too is completely flooded,” said Hadjo Issa, a mother of four from Karadjé. She used to make a living by selling juice, before the floods destroyed her home and fridge.

People already affected by the negative effects of the COVID-19 pandemic are now facing major challenges in terms of food and shelter and non-food items. The flooding has led to significant losses of goods and cereal crops, especially rice grown in the Niger River valley. This, combined with the impact of COVID-19 and ongoing insecurity in parts of the country, could lead to further hunger and food insecurity for many people.

“It's malaria season, there some people are already sick and can’t get treatment. We are really, really in need and are appealing for help,” said Mamadou Maiga Harouna, a 50-year-old waiter and father of 13 children from Lamordé neighborhood.

“The dike gave way and the water caught us by surprise, so we didn't even have time to gather our belongings,” he said.

“The water came in and houses fell down. It's total desolation. There, water is everywhere, many houses are collapsing with people there who don't have somewhere to go. The school classrooms are full, and we don't know what to do.”

Serious damage to the road network has cut off some areas and caused diversions on major roads.

“This is the first time I have witnessed such a phenomenon. There were floods in 2012 that caused damage, but what we are seeing today is really a catastrophe,” said Harouna.

“We really need the NGOs to support us, we really need help. People need somewhere to settle down, and something to eat in the meantime.”

CARE Niger was established in 1974 in response to famine and has worked on several food security projects since then. The program currently focuses on health and nutrition, natural resources management, education, local governance, conflict resolution, women’s empowerment, micro-finance, disaster risk reduction, and emergency preparedness and response.

Niger is the birthplace of CARE’s successful and often-replicated Village Savings and Loans Associations (VSLA) program, which economically empowers women and raises their social and political status. The project is known as ‘Mata Masu Dubara’ (MMD), which means “ingenious women” or “women on the move.”