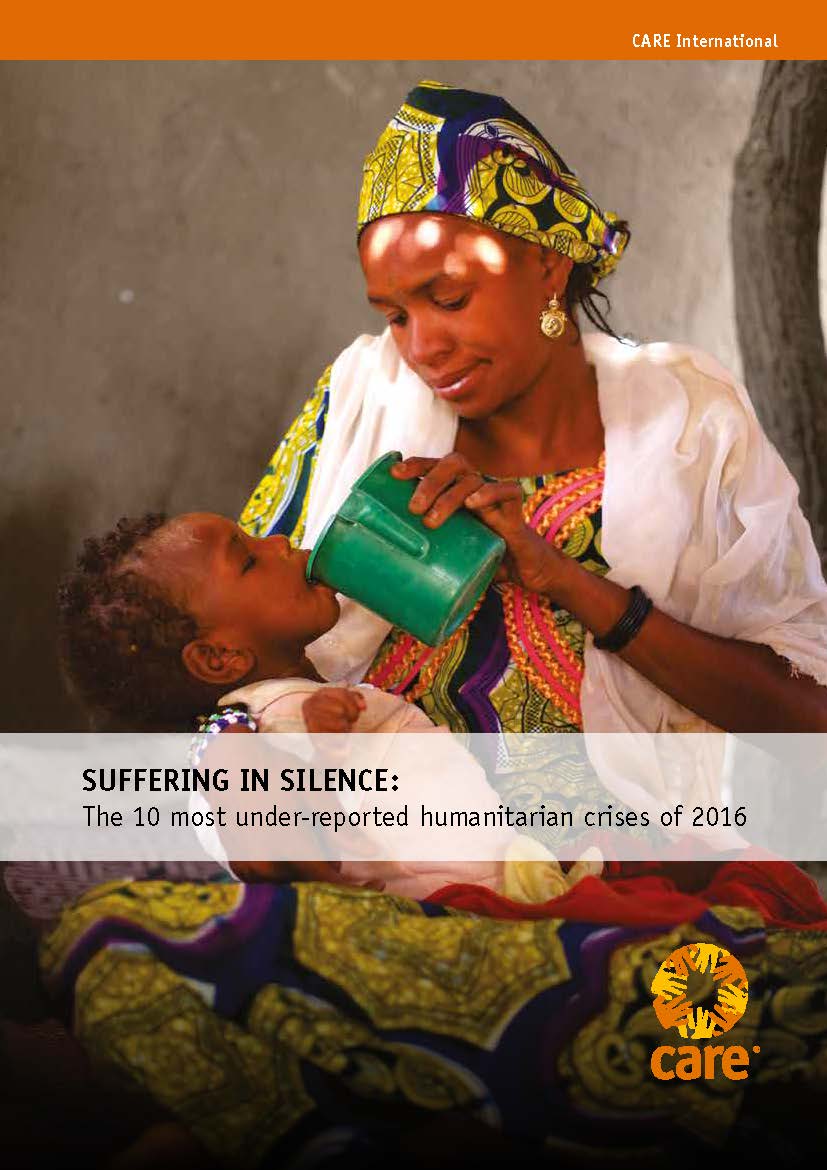 “There are many disasters around the world that rarely make it into the news. With this report CARE aims to shine the spotlight on those humanitarian crises that have been neglected or eclipsed by others grabbing the world’s attention”, says Philippe Guiton, CARE International’s Humanitarian and Operations Director.

Media attention and fundraising for humanitarian causes are closely intertwined. Watching people suffering on TV prompts many people to engage and donate, which is widely known as ‘the CNN effect’. “The media has the power to set agendas, hold politicians accountable and help raise crucial funds to deliver aid”, says Guiton. “At the same time, politicians must not act solely based on political interests. Politicians prefer to focus their attention on the most visible emergencies to show their constituencies that they are acting. These humanitarian crises are not simply forgotten. They are wilfully ignored and neglected by world leaders.”

In 2017, the world faces conflicts that are raging longer and longer. Poor families have to cope with typhoons, droughts and floods that are becoming stronger and happen more frequently. The UN’s Global Humanitarian Overview for 2017 requires $22.2 billion to help over 92 million people in urgent need. “Poor people must become more resilient to protect their lives, homes and livelihoods from recurring natural disasters. World leaders must assume their responsibility to prevent and end conflict. Ultimately, they hold the power to find political solutions to end bloodshed and suffering. They must step up their action”, Guiton urges.

CARE International researched over 30 natural disasters and ongoing conflicts that affected at least one million people and analysed how often they were mentioned in online news articles. “Most of these crises will continue to need our support beyond 2017. Every day, families across the world live in constant fear for their survival as bombs are dropping in their neighbourhood, as floods or drought destroy their fields and kill their cattle, as brutal attacks force them to leave their homes. They deserve their stories being told”, says Guiton.

Note to editors: Using the media monitoring services of Meltwater Group, CARE analysed those natural disasters or conflicts that received the least media attention in 2016. More than 250,000 global online sources were monitored in English, French and German. To filter according to scale, we chose countries in which at least one million people are affected by natural or man-made disasters. The result is a list of over 30 crises that we analysed and ranked by the number of articles mentioning each, starting with the one that received the fewest articles.

Founded in 1945, CARE International works around the globe to save lives, defeat poverty and achieve social justice. We put women and girls in the centre because we know that we cannot overcome poverty until all people have equal rights and opportunities.