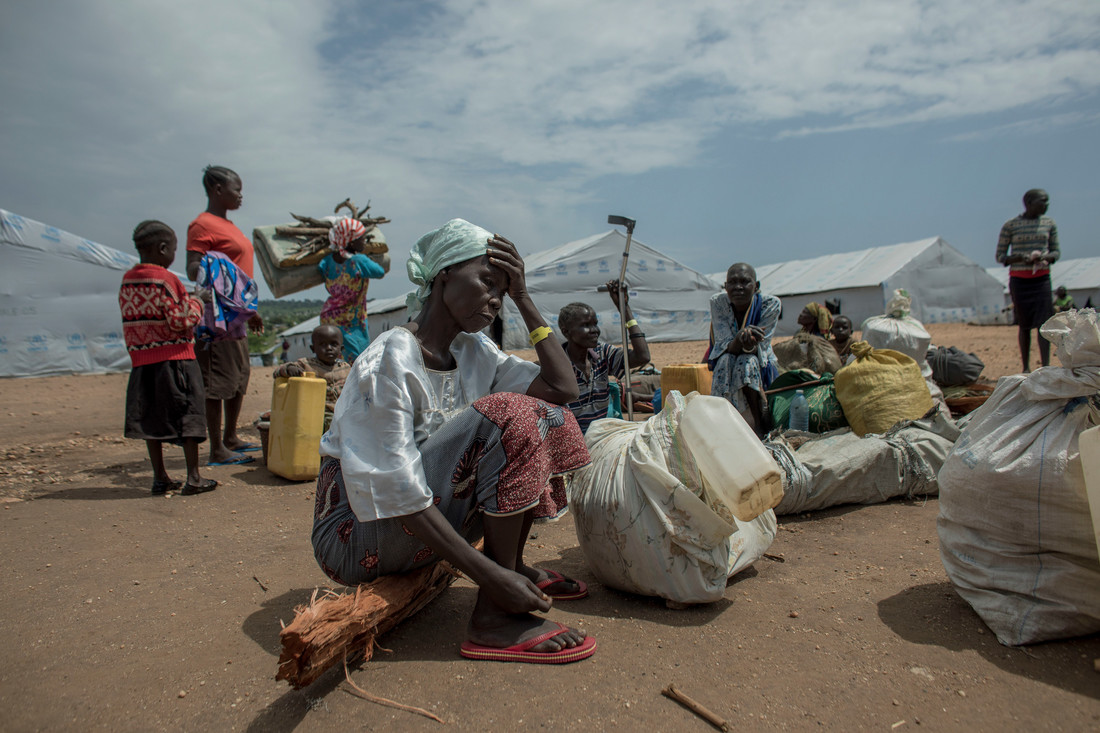 Refugees, carrying their few remaining possessions, wait in the transportation area of the Imvepi Refugee Settlement camp in July 2019. Photo by Josh Estey/CARE

Geneva, June 20, 2020 - World Refugee 2020 sees funding for refugee response plans at an all-time low. Despite the added threat of COVID-19 across all refugee hosting countries, international financial support is significantly lower than this time last year.

The total amount required to respond to the 6 regional refugee response plans globally represents only 11% of what experts estimate as the volume of international arms trade per year, while the amount received as of June this year represents a mere 1% of that.

“Now, more than ever, when global solidarity is the only solution to Covid-19, CARE calls on donors and States to share responsibility for the burden of hosting refugees.  Although the percentage has declined in the last two decades, Low Income Countries continue to host the majority of refugees,” says Delphine Pinault, CARE International Humanitarian Policy Advocacy Coordinator.

As of the middle of June 2020 a total of $1.12 billion has been received out of a required $10.86 billion‬‬ (10.3%) to support joined up regional responses to some of the biggest refugee crises around the world.  “While we are seeing a pattern of needs and required funding increasing year on year, the percentage of funding actually received has dropped year on year” says Emma Naylor-Ngugi CARE Regional Director for East, Central and West Africa.

Funding is critically needed to support refugee protection, self-reliance and innovation. Across the globe, from Jordan to Uganda to Ecuador, refugees are involved in a wide range of self-initiated, small scale projects to help fight the COVID-19 outbreak. All this stands at risk of being lost if more and immediate funding is not committed to support refugee communities.

Nirvana Shawky, CARE’s Regional Director for MENA says: “Despite being amongst the most at risk of exploitation, violence, and poverty, we see women refugees making extraordinary contributions to the societies in which they live. On the front line of the COVID-19 response, experienced doctors and nurses are providing their services as volunteers, and community workers are raising awareness about the pandemic through phone services. Whether they are Syrian, Sudanese, Palestinian, Iraqi or Yemeni, we are inspired every day by refugees across the region showing resilience, overcoming challenges in their daily lives, and giving back to their hosting communities.”

The resourcefulness, self-reliance and proactive response by refugees to support their own communities and find solutions in the face of COVID-19 is mirrored across the globe.

In East Central and Southern Africa, Naylor-Ngugi continues: “Refugees in our region have adapted in incredible ways to fight the adverse effects of this pandemic. In Uganda for example, we have seen women start making masks and supporting the prevention of COVID-19 in their communities. But the stark reality is that this time next year, more gaps in life saving services will need to be filled by refugees themselves and the solidarity to their often very poor hosts, potentially exceeding their capacity to cope, because there is no money.”

While in Asia, Gareth Mace, CARE’s Deputy Regional Director- Program Quality, notes; “while many people may think of refugees as passive recipients of support or assistance, CARE knows well that this often does not fit the reality. In Cox’s Bazar, Bangladesh, we are working with and alongside Rohingya community volunteers – many of whom are women - who are taking the lead on important responsibilities like awareness raising on COVID-19 and ensuring social distancing during distributions.”

Of the 6 current regional or joint refugee response plans, four are under 10% funded, with the appeal for the Democratic Republic of Congo refugee crisis just over 3% funded, despite being 6 months into the year. The South Sudan regional refugee response plan has received 5 times less funding than this time last year. These 6 response plans cover around 1/4 of the over 79.5 million people displaced at the end of 2019.

Claudine Awute CARE Regional Director for West Africa says; “refugees have little choice but to live in camps or with host communities - it is not uncommon for 20 people or more having to share a space normally suitable for five. On top of this, they are being asked to take precautions to protect themselves against COVID-19. If they can't afford the bare minimum, and are forced to live in places where space is at a premium, how can they really protect themselves against this pandemic?"

According to Tatiana Bertolucci, CARE Regional Director for Latin America and the Caribbean; “Venezuelan refugees have responded with resilience and amazing innovative thinking, contributing to their communities. Anibal comes to mind - a Venezuelan in Ecuador who despite the pandemic did not lose hope to train and become a barber. He speaks eagerly about his plans, and never lets the setbacks in life get to him. Like Anibal, let’s not forget the contribution to our society refugees bring and our duty to protect them.”