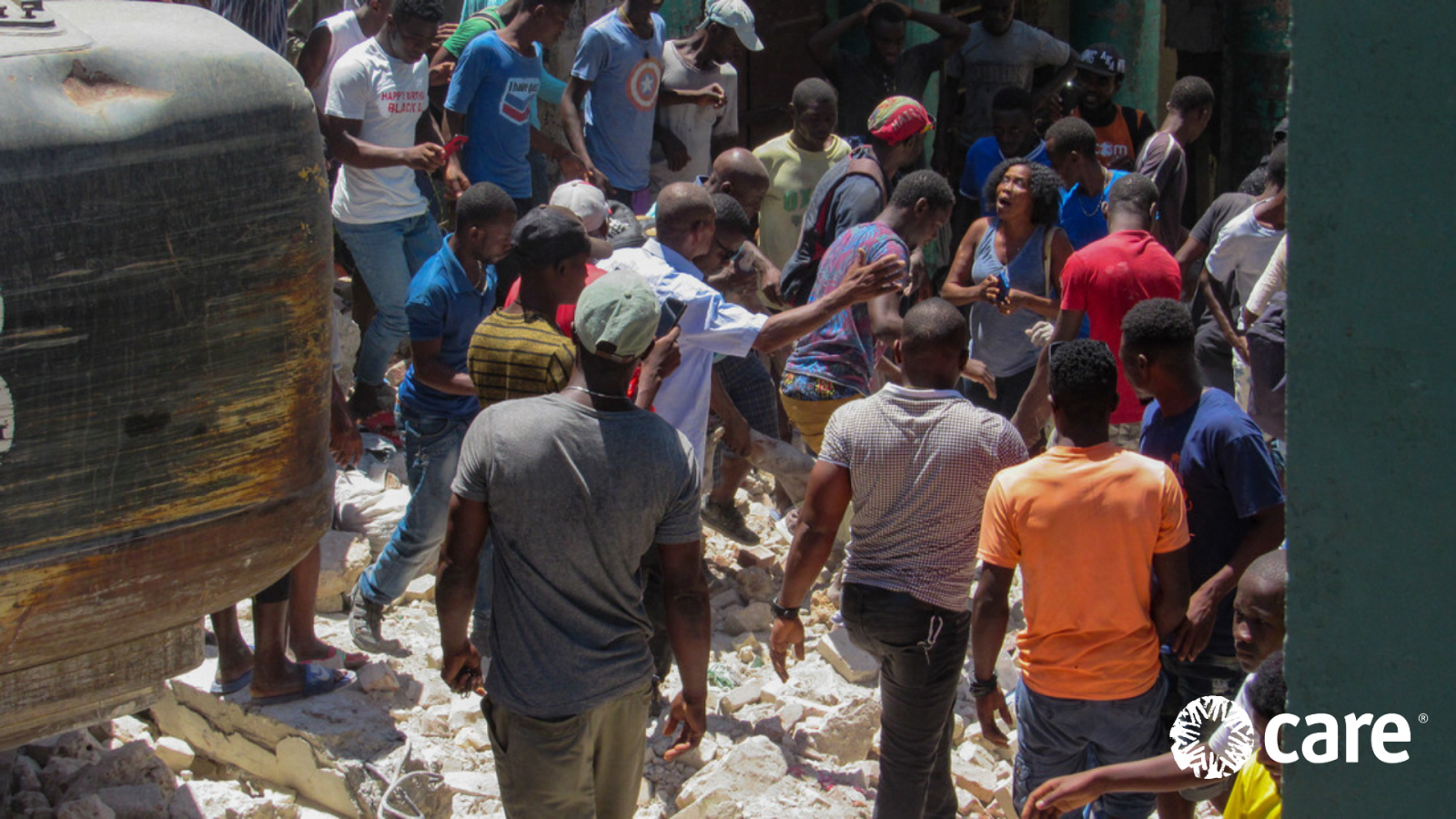 Port-au-Prince, Haiti, Sunday 15 August, 2021 - CARE teams have begun distributing core relief items including tents and water in Grand Anse, following the devastating 7.2 magnitude earthquake assessing the impact on communities in the south of the Island. The earthquake, which has already led to over 700 deaths and nearly 2,000 injured has also damaged homes and smaller infrastructure, displacing thousands, with the full extent of damage still unknown. CARE teams in on the ground have noted a huge and immediate need for temporary shelter, water and other core relief items.

“So far, our teams in and around Jeremie – which was badly hit by the quake – have found that at least 469 homes were destroyed and over 1,000 people are in need of tents or some form of temporary shelter. We are continuing to carry out assessments and have begun distributing core relief items, but many of the areas affected are logistically very challenging to reach so we are not likely to know the full impact of earthquake for days to come as teams access these remote areas. Even here Port au Prince we continue to experience aftershocks.

Already as of June we have been forced to deliver aid supplies to the area by boat or plane due to increased insecurity on the roads. The earthquake has added to this by damaging many of the access roads with landslides. It has hit communities that were already suffering from high levels of malnutrition and hunger, and this is going to make a bad situation worse.

On top of this we also have a tropical depression headed towards the island, which may cause further damage and make recovery efforts even more challenging. Now more than ever international assistance and aid is needed to support the people of Haiti.

We know from past experience both in Haiti and other emergencies that women and girls are often the worst affected by these types of natural disasters, facing compounding stresses and higher threats of violence. CARE will be undertaking an assessment of the specific needs of women and girls and making sure it takes their specific concerns and voices into account in the response we mount.”

The earthquake, that hit Haiti on Saturday 14th August, has affected three of the departments in the south of the island where CARE has been running food security and other programming. In the areas where CARE programmes initial assessments show that there are 107 deaths, over 600 injured and more than 1,100 homes destroyed, with some 100 people still unaccounted for. CARE has cyclone response supply kits already pre-positioned which will be sent to affected communities.

CARE Haiti is looking to raise US$20 million to help those worst affected in the aftermath of the earthquake.

About CARE in Haiti

CARE started operations in Haiti in 1954 with emergency response interventions. Since then, CARE has continuously grown its programming capacities across the humanitarian, recovery, and long-term development spectrum. Over the years, CARE Haiti has gained experience, local knowledge, and operational capabilities to deliver and shift programming between emergency response, recovery and long-term development programming, as the country context changes. For example, CARE was amongst the first organizations to engage in various aspects of the COVID-19 response.