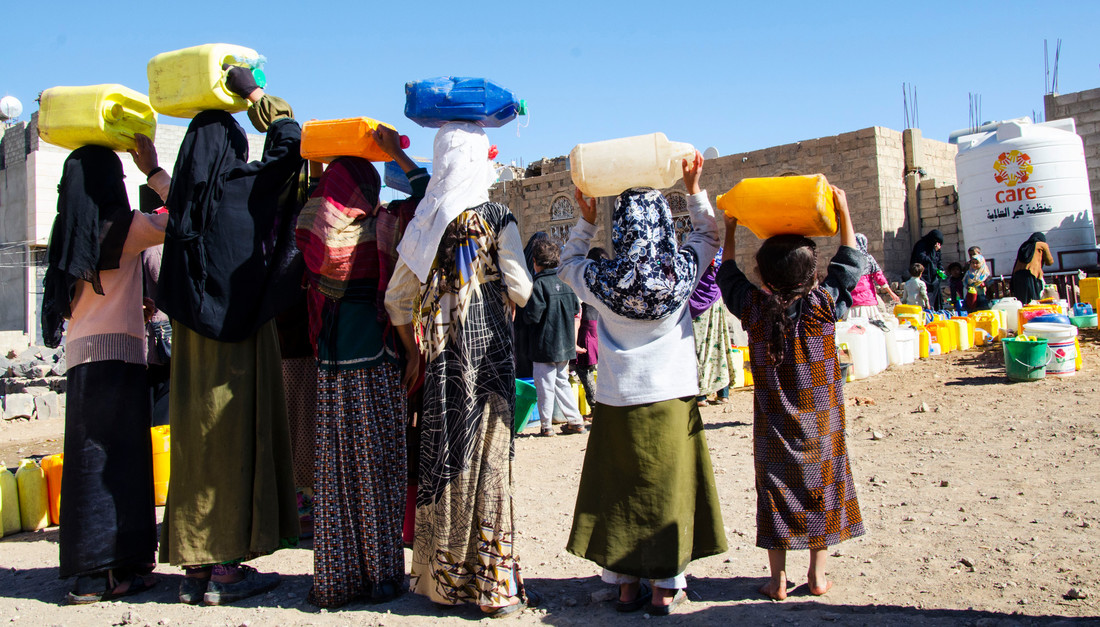 Six years of conflict in Yemen have taken a deadly toll on the Yemeni people, with an average of six women killed every week last year.

The UN estimates that almost a quarter of a million people have been killed either directly or indirectly by the conflict, which has had a disastrous impact on Yemen’s economy and led to record levels of malnutrition among children as well as thousands of people living in famine-like conditions. Basic services are non-existent, and over twenty million people – two-thirds of the population – are in need of humanitarian assistance.

“After six years of continuous war the scale of destruction in Yemen is enormous. Aid organisations like CARE are working desperately to fill in the gaps and provide life-saving assistance to families without alternatives for survival, but this is just not sustainable, especially with the lack of funding from international donors. It is widely recognised that an inclusive peace process is the only answer for Yemen, yet still year after year no progress is made and civilians continue to die, with six women per week killed by the conflict in 2020. Yemenis deserve every effort to be made towards peace – this sixth anniversary of the war is a reminder to everyone.” – Aaron Brent, Country Director

“We are coming into yet another year of a prolonged conflict that has had its heavy toll on education, millions of school-age boys and girls are deprived adequate and equitable access to education. This conflict must come to an end.” – Lina Alsafi, Youth Empowerment Coordinator

“As a mother – and like every mother in Yemen – I feel terror with every airstrike, especially when my kids are in school. My heart is broken to see the suffering of displaced people, particularly women and children. Civilians all over Yemen have nothing to do with this conflict but we are paying the price.” – Suha Basharen, Gender Specialist

First hand stories of death and injury from Yemen’s war:

Safia Mohammed is a mother of five. She is from Sa’ada governorate in northern Yemen. Before the war, life was peaceful and normal for Safia’s family. Her husband worked as a driver and she used to take care of the routine chores such as cooking, cleaning, and fetching water. After the conflict escalated, armed clashes near her home forced her and her family to flee to neighbouring Al Jawf governorate, where they had to start a new life of challenges and difficulties.

“Life became unbearable, yet we had to adapt to it and start all over again,” she says. “One day, an extraordinary event changed my life forever. I sent my son to buy a sack of wheat from the district market. While we were waiting for him, a group of people came to my home carrying different parts of his body. He had stepped on a landmine.”

This is a common story for families who have had to flee violence several times. They have lost their homes and family members and they are now dependent on humanitarian aid to survive. After escaping to Al Jawf, Safia and her family were forced to flee once more – to Amran governorate.

Naseem Fadel is a 26-year-old mother of three children:“I can’t praise our life before the war, but we were doing well. Then during the conflict when I was in the final year of university a piece of shrapnel from an explosion wounded my hand.” Naseem was taken to the hospital as her hand was so badly injured that it had to be amputated. “I literally lost everything; my life, my education and my arm,” she says.

In addition to her life-changing injury Naseem had to flee due to the fighting, and now like many displaced families across the country, Naseem’s family faces a dim future as the internal conflict and civil unrest have forced them to be repeatedly displaced.

In overcrowded displacement sites, women and girls suffer most from a lack of privacy and limited access to basic services, which threatens their safety and wellbeing. Due to the economic recession and depreciation of the Yemeni Riyal, food has become unaffordable for many people in Yemen.

“Putting food on the table is getting harder and harder,” says Naseem. “We don’t know where our next meal will come from. My husband goes out every morning to find work, but he barely makes one dollar a day. I hope I can go back to school and that my children have a decent life and live happily. But my biggest hope is that the war would stop and all Yemenis have the life they dream of.”

CARE works in 14 governorates across Yemen, providing lifesaving food, cash, livelihoods, water and sanitation services to those in need, including internally displaced people (IDPs). CARE has worked in Yemen since 1992 and continues to deliver humanitarian services under extremely challenging circumstances. We focus on making sure that people in the hardest-hit and most hard-to-reach areas have access to emergency supplies and assistance with meeting their basic needs.