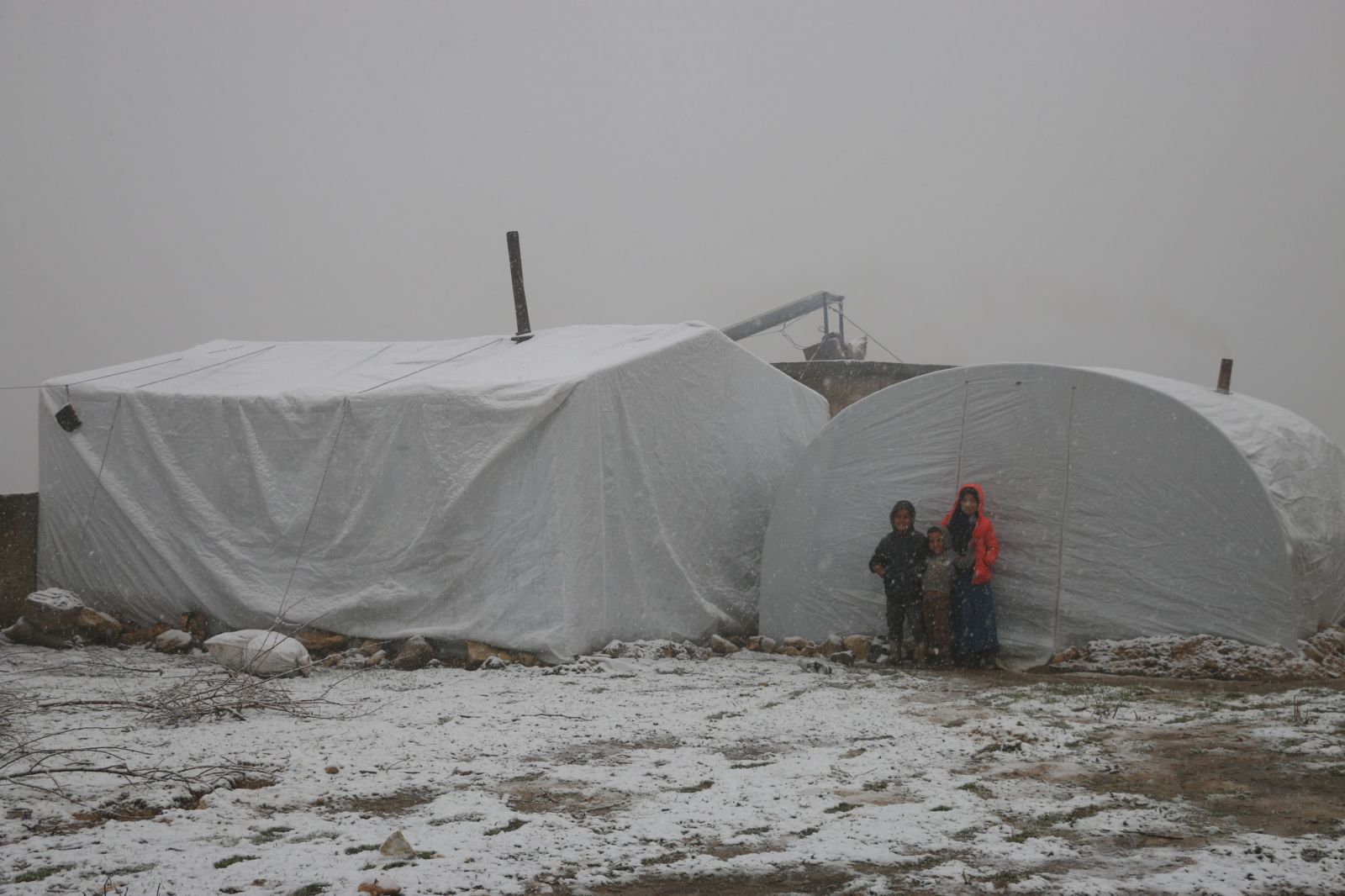 Photo: After snowfall in western Aleppo, children clean above their tent to prevent it from collapsing and push the snow away to stop water leaking inside. Shafak/CARE

Thursday, 11 March 2021 -  35 of the leading aid agencies have joined together to warn of the suffering and increased, irreversible, damage if the growing humanitarian needs in Syria are not met and a political solution is not found. The 35 agencies have highlighted that a decade since the outset of the conflict, living conditions for many Syrians are worse than ever.

“Monday March 15th will mark 10 years since the onset of the crisis in Syria. A decade of conflict in Syria risks creating further irreversible impact to millions of displaced civilians and on the region unless world powers use all their influence to stop the crisis. There continues to be violence and indiscriminate attacks against civilians and civilian infrastructure.

Inside Syria over 80% of people are living in poverty and food insecurity levels are at a record high. Over 12.4 million people are food insecure and a further 1.8 million are at risk. 12.2 million Syrians lack regular access to clean water and 2.4 million children are currently out of school. The COVID-19 global pandemic has only exacerbated the human suffering. Vital infrastructure, such as hospitals, schools, markets, homes and roads have been damaged or destroyed throughout the conflict. Many that are still standing have become shelters for those displaced by the conflict. Syrians are also facing rising inflation as a result of the declining value of the Syrian Pound, widespread unemployment, and increasingly common fuel shortages. Basic goods are no longer affordable for many, forcing families to reduce the amount of meals they put on the table or trade what little food they do have for medicine.

The protracted displacement crisis as a result of the Syrian conflict is the worst since the Second World War. 5.6 million Syrians remain displaced in neighbouring countries, of which 2.5 million are children. 6.2 million remain internally displaced across different parts of Syria.

In the neighbouring countries, 5.5 million Syrian refugees and 4.8 million impacted host community members are in need of humanitarian assistance, with COVID-19 increasing poverty and risk of sexual-gender based violence. Most have little legal protections and few livelihood opportunities. Nearly 580,000 Syrian refugees are in need of resettlement, less than 2% have had their cases submitted last year and far more than the resettlement spaces available. The UN is warning that there are record low levels of resettlement.

We call on the international community to step up its aid to Syrians across the country and in refugee-hosting countries and recognise its responsibility to support refugees. Cross-border access into Syria must be maintained, and humanitarian access within the country must also be strengthened. The EU-hosted Brussels V March ministerial conference on March 29th-30th is the best opportunity for the world to show it has not forgotten about Syria and to act to end the growing suffering. We also call on governments with influence over the warring parties to use their pressure to seek an end to this brutal conflict and spare millions more Syrians from the violence. It is essential that we invest both in urgent humanitarian needs and long-term development to help build resilience well into the future. We must allow Syrians to live a better life where income-generating opportunities, repaired homes, functioning public infrastructure, clean water, basic services, and hope for the future are existent and accessible to all - otherwise the impact of a decade of conflict will be irreversible”.

Center for Civil Society and Democracy

Founded in 1945, CARE is a leading humanitarian organization fighting global poverty and providing lifesaving assistance in emergencies. In 104 countries around the world, CARE places special focus on working alongside poor girls and women because, equipped with the proper resources, they have the power to help lift whole families and entire communities out of poverty. To learn more, visit www.care-international.org.