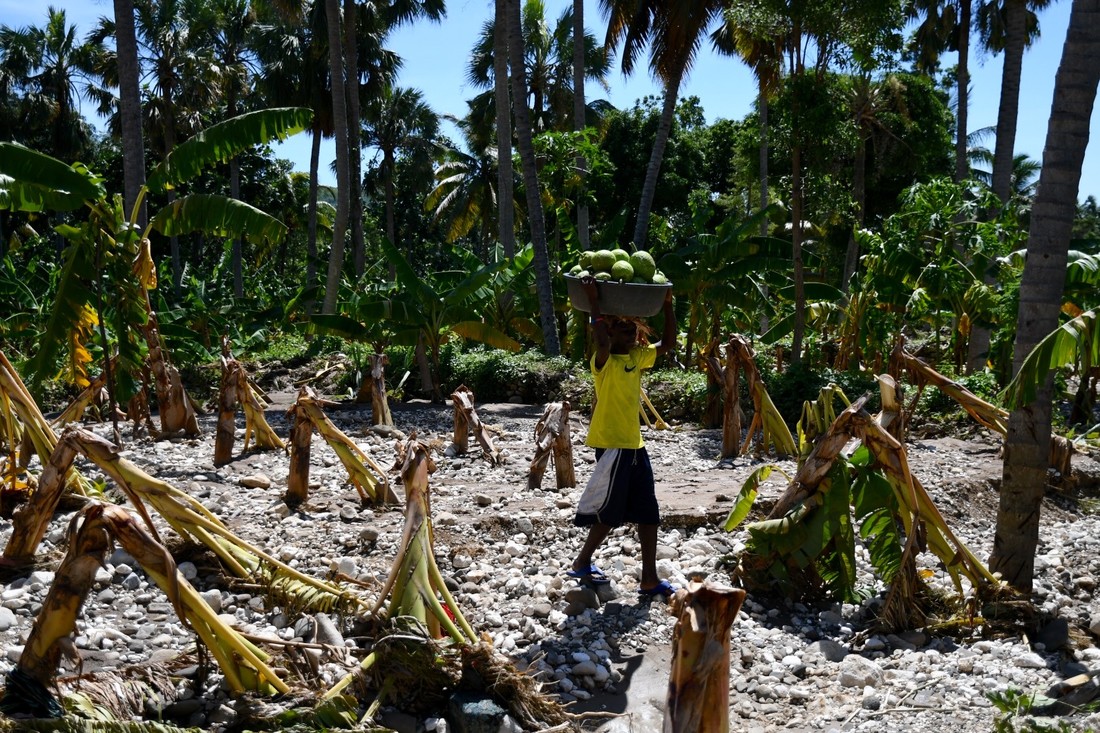 Photo: “The hurricane hit at the worst possible time. I had just invested in planting my plantains, and now all of my plantain crops are gone,” said Cleta, a widow and mother of six children, on the impact of Haiti's category 5 Hurricane Matthew in 2016.

A climate change exacerbated hurricane season may cause massive human suffering if preparedness activities are not stepped up, warns CARE. Hurricane season in the Caribbean is due to start on June 1st, and this year could be more deadly than ever.

Women and girls, in many countries already particularly burdened by COVID-19 related impacts and lockdowns, will be the most impacted. They are particularly at risk, as the climate crisis exacerbates existing gender inequality such as social and cultural barriers which means they are often marginalised in the decision-making, and as they do most of the subsistence farming providing food, which may be threatened by climate change impacts.

In a new research paper, scientists have found the Caribbean hurricane region to be among the hotspots of compounding climate and COVID-19 risks in the next months. In Haiti, for example, over 4.1 million people are in urgent need of food assistance, and the destruction caused by the hurricane season, on top of the melting pot of other factors including COVID, social unrest, and destruction from decades of natural disasters could be catastrophic. Recent weather disasters in COVID-struck countries like Vanuatu, Philippines, India and Bangladesh already resulted in grim impacts on poor people’s livelihoods. In Bangladesh, for example, more than 2 million people had to be evacuated into storm shelters to protect against cyclone Amphan, limiting possibilities of social distancing, and many crops and arable lands were destroyed by seawater, trees and homes uprooted, and animals killed.

Yawo Douvon, CARE Haiti Country Director, says: Haiti is still suffering from the impacts of the category 5 Hurricane Matthew in 2016, which caused massive destruction. Today, 40% of the Haitian population are in urgent need of food assistance, and are struggling to protect themselves from the COVID-19 pandemic. As COVID-19 limits people’s ability to respond, we call on all actors to ensure early warning systems function and that life-saving disaster preparedness is adapted to face the compounded risks associated with COVID-19.

The last four years have been above-average and damaging hurricane seasons. Scientists have found that man-made climate change, fuelled by the burning of fossil fuels, adds to the threats of hurricanes, for example through rising ocean water temperatures. A new research paper has found that the chances of a major hurricane occurring in the North Atlantic have increased by 49% per decade between 1979 and 2017. It is expected that there will likely be more intense and destructive hurricanes that carry higher wind speeds and more precipitation as a result of global warming. The impacts of this trend are likely to be exacerbated by sea level rise and a growing population along coastlines.

Michelle Nunn, President and CEO of CARE USA, says: “Hurricanes have caused massive destruction and human suffering in recent years, harming poor communities particularly. Scientists warn that the climate crisis may bring even more intense hurricanes and layered on top of COVID-19 restrictions and impacts; this may very well be a devastating season. In the short term, we need to ensure poor communities can better prepare for disasters and protect themselves. Early warning systems must enable families at risk to protect themselves, and food aid and cash support must be made available to help people recover. We need to ensure we are both protecting women and girls, who suffer the most in natural disasters, and equipping them to lead in the response.”

CARE calls on policymakers worldwide to address immediate basic needs and ensure responses to the compounded impacts of extreme weather events during the COVID-19 pandemic  are community-driven with strong women’s leadership. Such efforts need to address the climate crisis, immediate humanitarian and socio-economic impacts on livelihoods, and the right to food, in a gender-responsive manner. Furthermore, governments need to step up efforts to recover in a way that shifts away from fossil-fuel burning practices to renewable energy to limit the escalation of the climate crisis.