Syria’s Women Yearn for A World with Equality 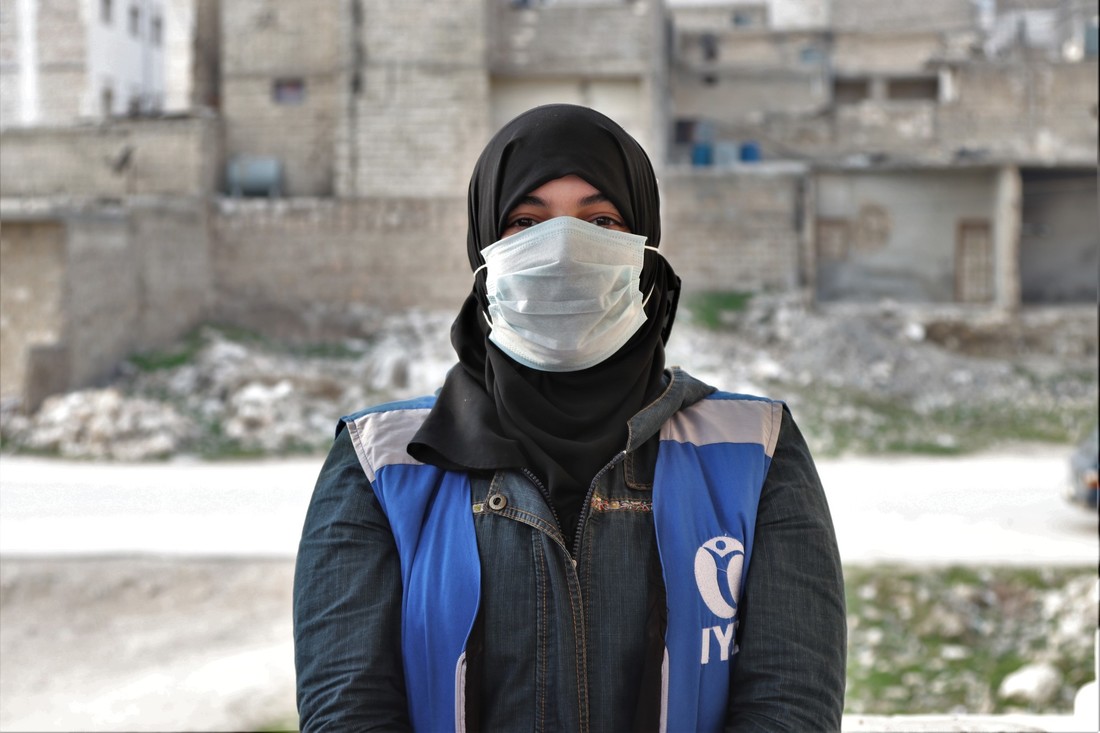 Three years ago, after losing her brother and sister to the war, Abeer* was displaced from Deir Ezzor in northeast Syria to the northwest.

Abeer, 26, got married at an early age. Even though she was forced to drop out of school, her marriage did not last more than three years. After the divorce, she suffered from psychological trauma for a period of time, but thanks to the support she received from family and friends, she was able to overcome the suffering she had experienced. She returned to school and was later able to register at university.

Now Abeer is the facilitator of awareness sessions at IYD, one of CARE’s partner organizations in northwest Syria. She provides assistance and consultation to women and girls who have been through difficult experiences, such as hers.

“My goal is to see everyone smile. I feel happy when I see a smile on the face of someone whom I am helped through my work,” Abeer says.

One day, during one of her sessions, Abeer met a 14-year-old girl who had dropped out of school and wanted to get married, like many other girls in her town. “I felt like this girl would have a similar experience to the one I had, so I was determined to help her. I spoke to her and told her my story – how I also left school while I was married, followed by the distress I went through after my marriage failed.

After some time, I went back to visit the family and see if I had managed to persuade the girl to returned to school. The mother welcomed me and said that her daughter was now studying for the high school diploma exam. My feeling was indescribable.”

“If I had the power to change the world, I would stop early marriage, for boys and girls. I have seen terrible things resulting from it in our society, such as widows who are 16 years old and sometimes younger. It is unacceptable.”

Abeer believes that through the expertise and wisdom of mothers, we can build a harmonious world. “We need women leaders because building up a cohesive society requires patience, and who is better than women and mothers. With their patience, mothers build homes and families, and through their leadership, they raise the future leaders of our society.”

“An equal world is one where men and women both have the right to freely express their views,” she adds. 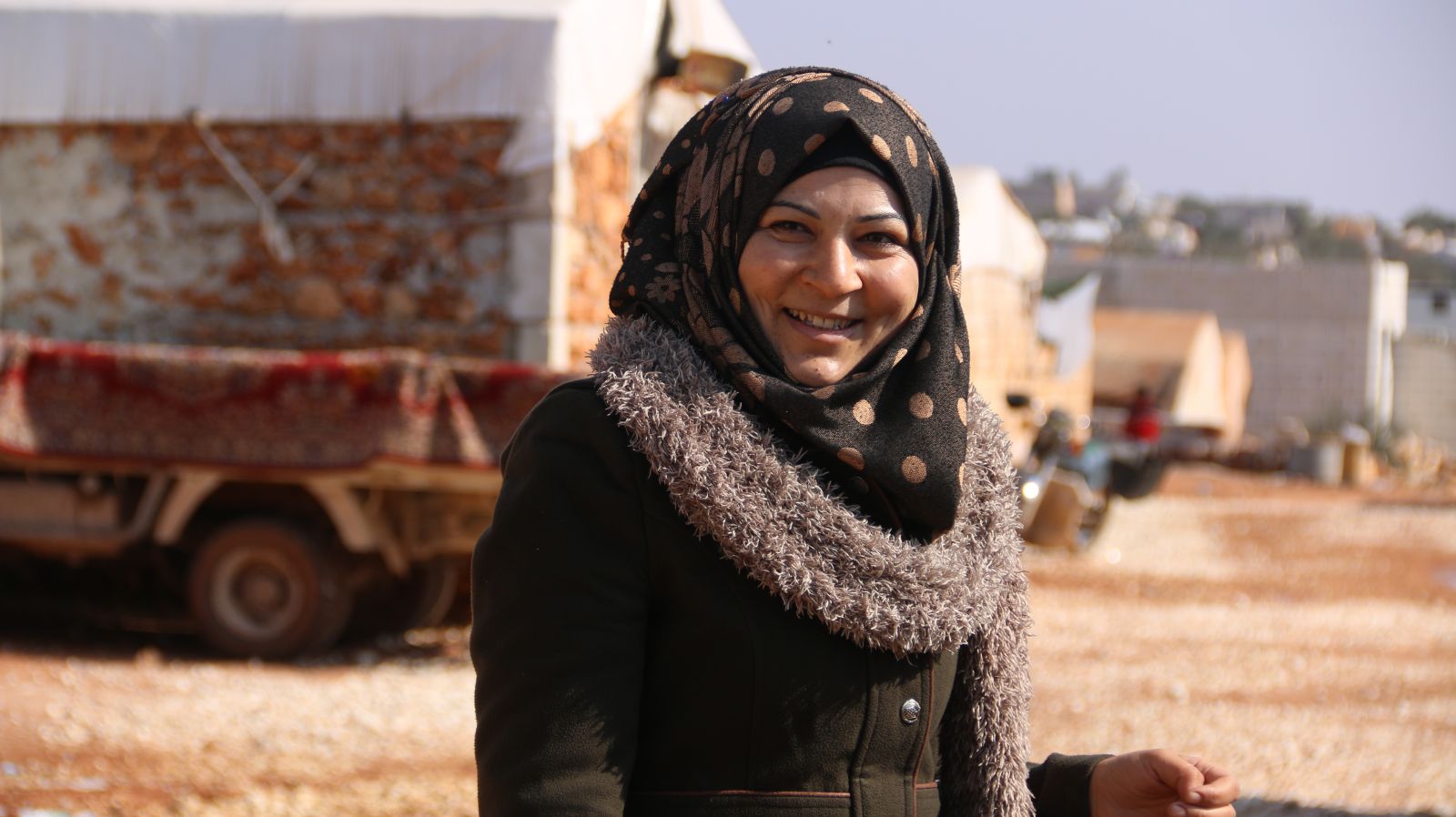 A displaced woman in Idlib: “My goal is to eliminate all forms of violence against women”

Motivated by her aspiration to change her reality and society in a positive way, Farah* took the first step by studying nursing to volunteer as a health worker and help people in her community. To develop her skills, she joined the Balsam center, operated by Syria Relief and Development (SRD), a Syrian organization that CARE partners with in NW Syria, to learn about gender-based violence and acquire computer and English language skills.

Farah, 40, lives in a displacement camp in Idlib. She takes an active role in raising awareness about women’s right and gender-based violence in her community. Through her work, she influences a wide social network within the camp and the surrounding host community.

“The harsh experience that I went through motivates me to commit to help in guiding women to be active in their society and to stay safe,” Farah says. “I seek to free women from all constraints that burden them, and to encourage them to understand and obtain their rights, while learning and working to become an active member in their communities. In addition, my goal is to eliminate all forms of violence against women.”

Farah believes that women are best placed to understand and defend women’s rights. She hopes to see more female leaders who support and fight for the rights of women. “Our society needs more women leaders who can play a role in raising awareness about women’s rights and responsibilities. With such leaders, the different components of society would become complementary.”

When talking about a good leader, Farah says, “a good leader must have integrity, be well-read and knowledgeable, self-confident, and master the art of persuasion.”

Farah sees an equal world that “flourishes and stabilizes when families live in love and peace; free from all forms of violence and exploitation.” 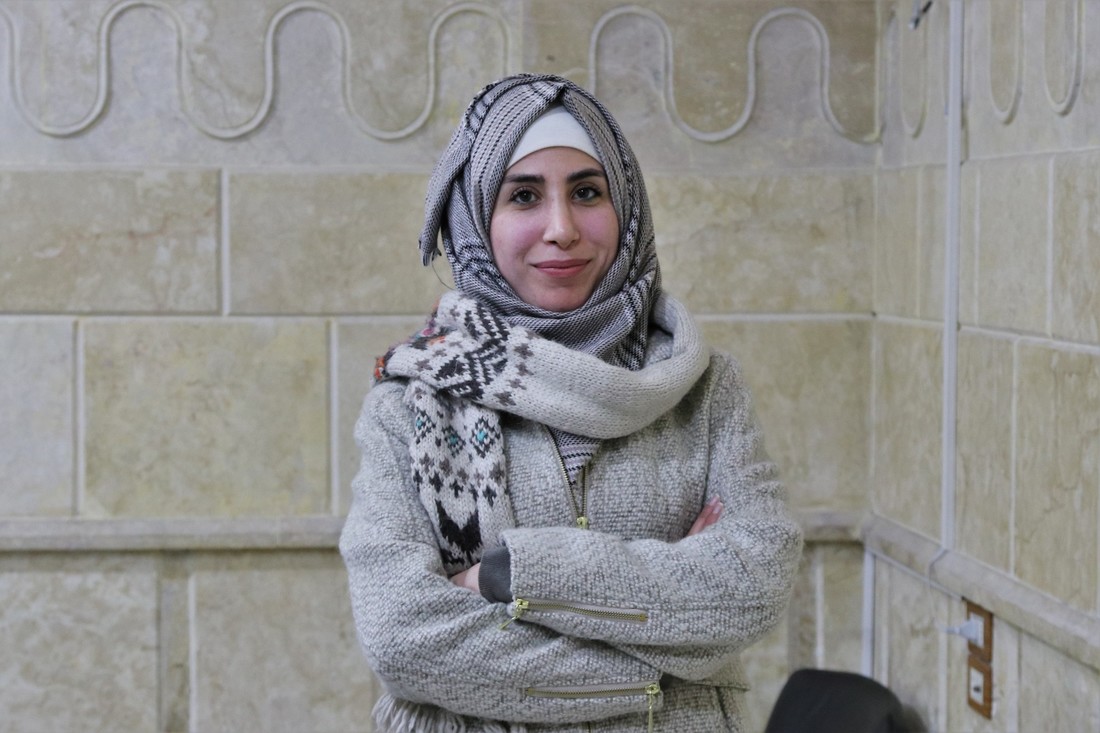 Maya*, 27, is a team member with IYD, one of CARE’s partners in northwest Syria. She started as a volunteer in the health outreach team and now she works in the field, directly delivering assistance to families in need.

Through her work, Maya noticed that many beneficiaries could not read or understand the information being distributed to them, so she decided to establish a literacy initiative. She has been able to reach a large number of people through her literacy initiative and the community she serves has benefitted.

“I feel sorry when I meet people who cannot read and have limited awareness of what is going on in the world. We had to communicate information to them verbally and they were not able to give them the information in written form. After the success of my literacy initiative, I was motivated to continue working in the education sector.”

“In order to reach your goal, you must have the will. Without the will and internal motivation, one cannot give to the community. This is what distinguishes a leader.”

Maya regards prominent roles for women as being those which bring the most positive impact on society. “Our society needs more women leaders to motivate other women and marginalized groups, who are not able to express their rights or achieve their goals.”

“If I ruled the world, I would focus on education because education is the basis for finding solutions to most problems in my country, Syria. Through education, women, men, and future generations will learn about their rights.” 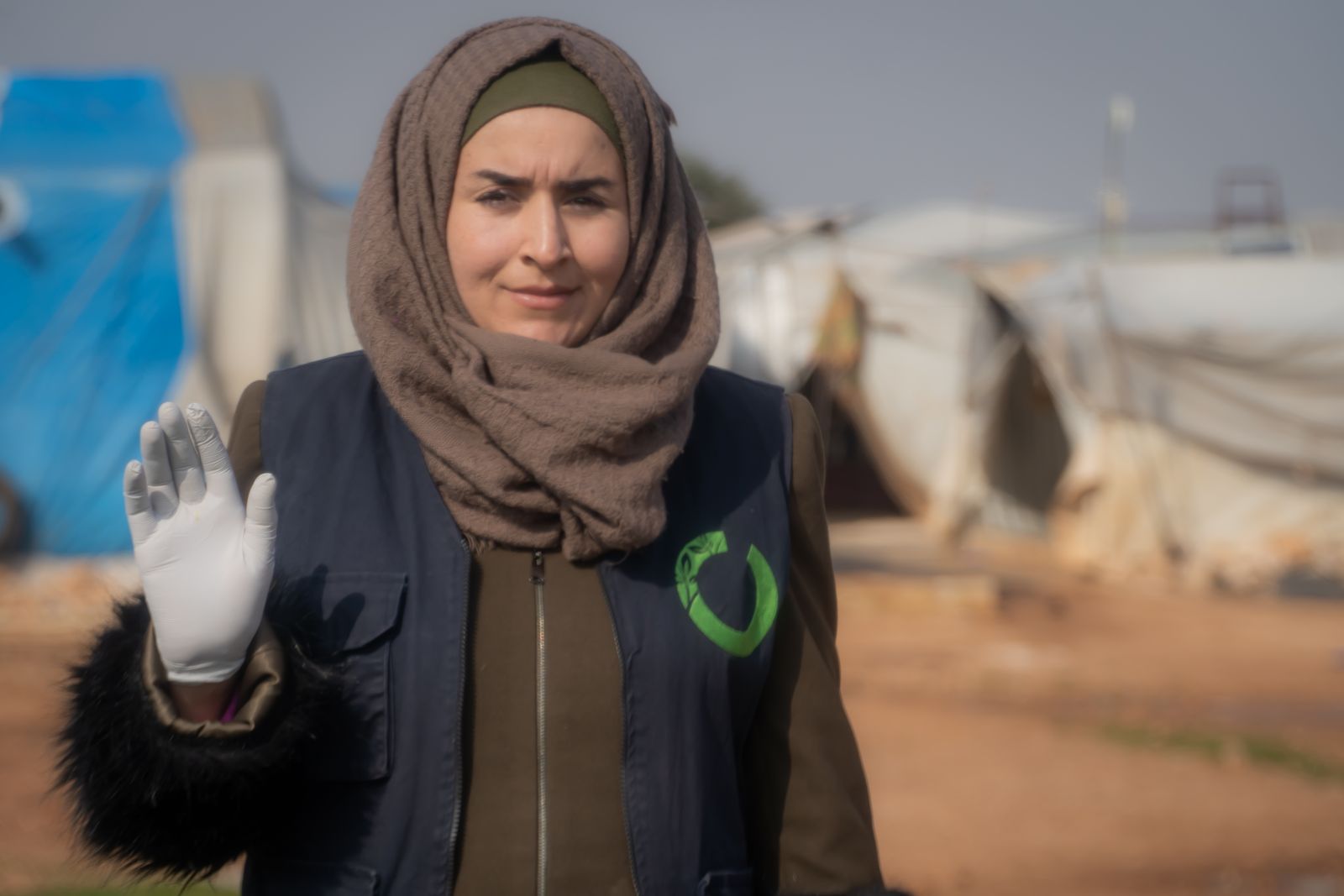 A Syrian Social Worker Determined to Make Her Mark

Nour*, is a social worker at Ihsan Relief and Development, one of CARE’s Syrian partner organizations in northwest Syria. She works with displaced children, living in camps, to raise awareness about COVID-19 and prevention measures.

She says, “what motivates me is that I want to protect displaced Syrian children from any harm, especially this virus. The camps are overcrowded and lack proper sanitation – children living under those conditions need all the support we can provide.”

“I seek to be an active woman, who makes her mark in the humanitarian response in Syria, whether it is the coronavirus or the unstable security situation.”

Through her work responding to the conflict in Syria, Nour knows from experience the value of aid provision. “A good leader must believe in the importance of humanitarian work, be honest, cope with the stress of work, maintain a good relationship with everyone, and listen to people’s concerns.”

She believes that female leadership is the pathway to raising women’s voices and achieving equal rights for women. “A woman leader can be the voice of every oppressed woman, who is deprived of her rights. Women are able to play different roles successfully, whether as mothers at home, teachers at schools, or senior managers at organizations. An equal world means that women and men have the same rights and opportunities, both in education and at work.” 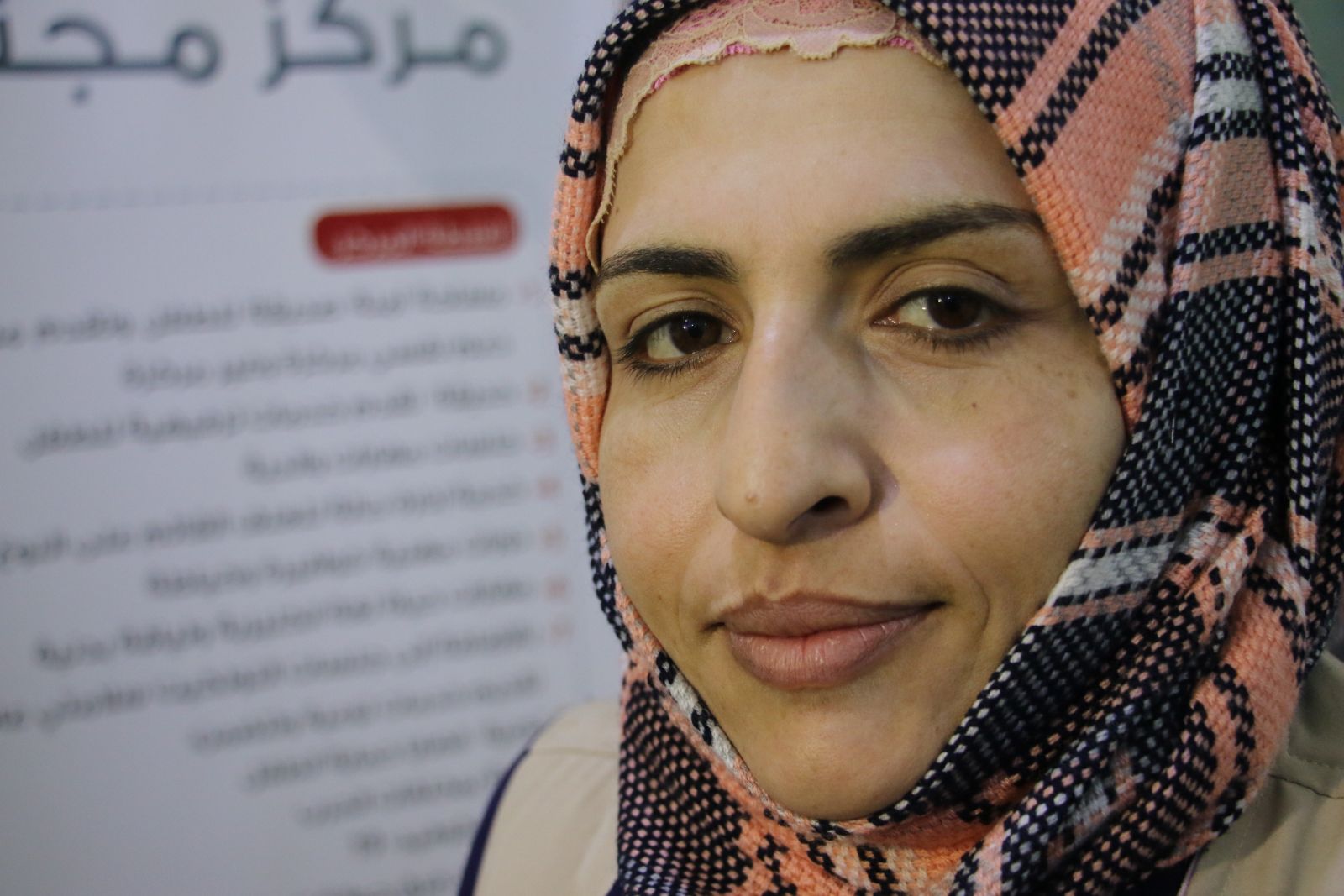 Syrian Aid Worker Dreams of a World Where People Are Equal

Before the war, Najah worked as a child protection specialist and a supervisor for an early recovery protection team. She was also a lecturer on the Protection of Children with Disabilities at the University of Aleppo. Although she lost her husband to the war in Syria, she had to overcome her grief to continue pursuing her role in helping and protecting children.

In the past few years, Najah worked in a number of protection centers and safe spaces in northwest Syria, providing psychosocial support services to children with disabilities, as well as families affected by the war. She has also worked as a trainer and supervisor of the field teams.

Najah joined Syria Relief and Development (SRD), one of CARE’s Syrian partner organizations in northern Syria, four years ago. “What motivates me is the idea of being a successful example of the Syrian woman, who is able to overcome all circumstances and challenges and influence her society in a positive way,” says Najah.

“In Syria, we need women leaders because a woman is the mother, wife, sister, friend, teacher, worker, and because of the war, she is also the father. A woman is able to play all these roles at the same time. To achieve balance, our society needs a diversity in leadership.”

Najah often receives expressions of thanks and encouragement from women, families, and children with whom she works. “‘I feel safe with you’, ‘I hope to become like you’, ‘Thank you, Miss Najah’. These words are like magic; they keep me going, despite the tiredness I feel.”

Despite all the hardship she has faced, Najah considers her experience one that represents many Syrian women, who have lived the effects of the war – from forced displacement to the multiple losses of loved ones. Just like many Syrian woman, she has devoted all her abilities and skills to provide support and positive change to her community, especially children.

When asked about what she would do if she ruled the world, Najah says passionately, “if I ruled the world, I would first stop all wars and conflicts. I would support civil society to achieve justice and equal rights for all, without any discrimination, in a way that respects human dignity and prevents all kinds of violence and exploitation.”

Najah dreams of a world, where people are equal. “An equal world is one where everyone can practice their full rights; where injustice and aggression end; where all humans can live a decent life and where vulnerable people receive specialized support.”

*Names have been changed to protect identities