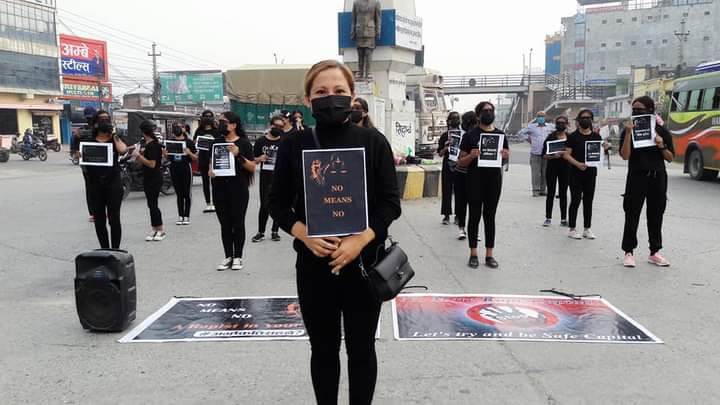 On the 8th of November, Bhairahawa, a city in the western part of Nepal, created a buzz for unusual activity. The activity was a street demonstration against rape, the first in the city. There were girls and women covered all in black, carrying slogans, banners and performing on the streets. The leader of that event was 18-years old, Pooja Teli,  from Bagaha,  Rohini 1- Rupandehi, Nepal.

Pooja joined a girls' group as a part of CARE's Tipping Point II program. Her group is called Laligurans Kishori Samuha where she is the president. It is a local group with 18 members.

Being the only girl in her village who was allowed to continue her education, Pooja grew up seeing a lot of discrimination and injustice around her. She shares that the girls in her village are not even allowed to wear clothes of their choices and are forced to put on traditional clothes. Many girls rarely fulfil their wish to put on pants. All of these made Pooja get into activism and speak up against gender-based discrimination in her community.

Ninety activists girls empowered by the Tipping point project, Nepal, led various surveys in more than 1800 households across their communities. These activists questioned the parents of adolescent girls and boys about their behaviour towards their children. Pooja and her group members also led the survey in her community.

The survey made the activist girls realize that the parents were positive about providing their daughter with quality education but also wishing that when their son gets married, they get a lot of dowry from the bride's family. Dowry is one of the most harmful practices which leads to an adolescent girl getting married early and giving up her education.

"The pandemic has made it more difficult for girls because of the added household work and roles as a caretaker. On the other side, these surveys (conducted by following the safety protocols) have also helped the family esp. the parents realize that their behaviour towards a girl is not the same as a boy," adds Pooja

Although the survey showed that the parents of the girls are still reluctant about the mobility of the girls, they have now realized that they are unable to treat their sons and daughters equally, something that they want to work on their future.

These activist girls believe that because of the survey, conversations about discrimination have started.

However, due to the pandemic, there has been a lot of difficulties for activists like Pooja. They have not been able to organize any kind of program to educate their community on the finding of the survey or even any kind of public activity.

Pooja plans that in coming days, she hopes to organize free health camps for the women of her communities, demonstrating dramas on the common issues like child marriage, GBV and education of girls.

Backlashing from the community members, mobility restrictions of her teammates and verbal abuse from people around the community creates obstacles for her but the support from her family keeps her going strong.

“I have been able to be a leader, use my voice for the voiceless!”, says Pooja. “In the coming days, I wish to organize an anti-rape program in my village too. That would be a big achievement for me.