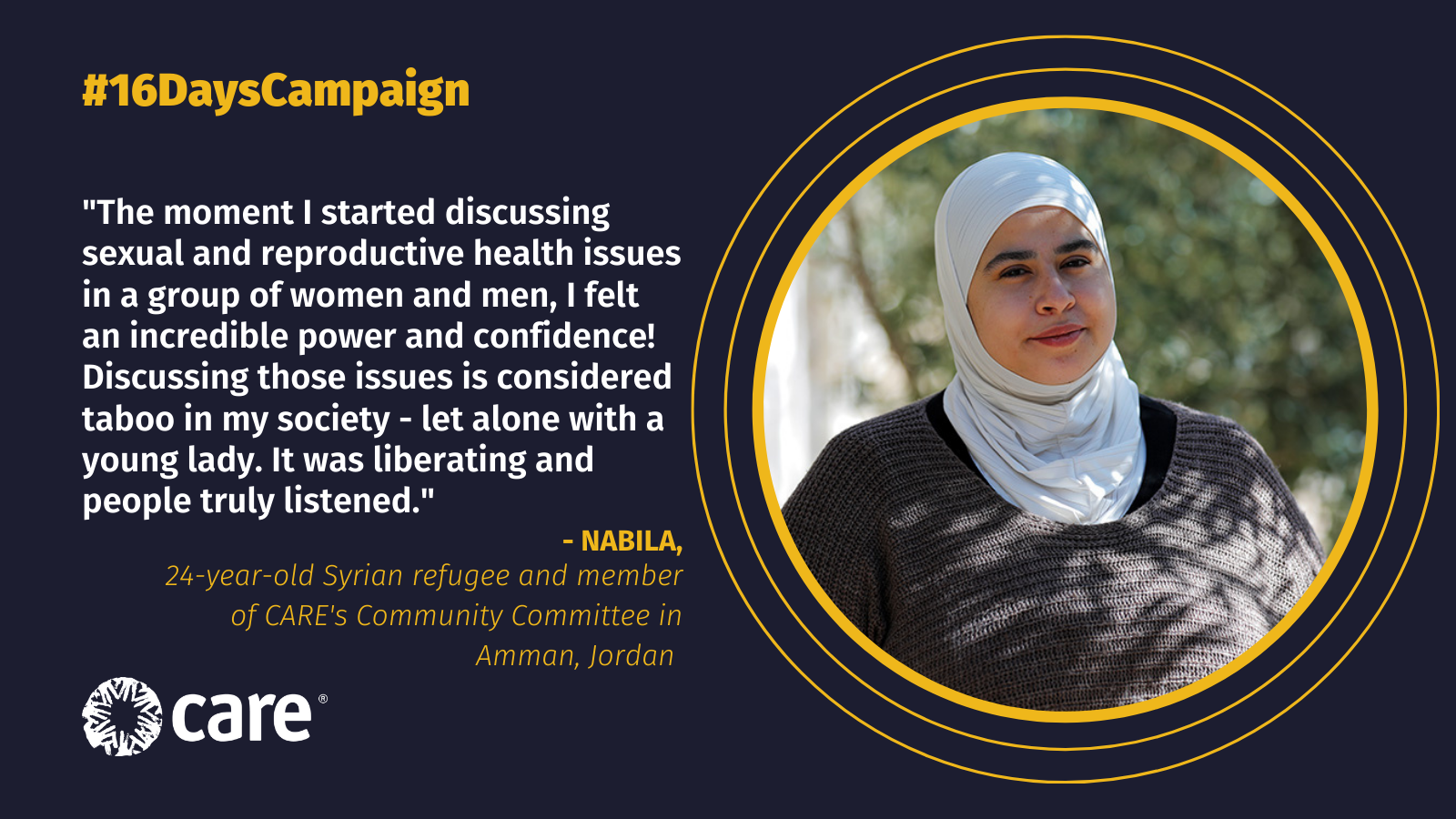 “I started working when I was a little under 18, then I got a volunteering job with a local NGO working with women victims of violence and thought to myself, why would anyone inflict such pain on others?”

Nabila, a 24-year-old Syrian refugee, has been living in Amman with her family of six after fleeing Damascus in 2012. She is an active member of CARE’s Community Committees.

“’I’m not living in a camp and my father supports the whole family and is very encouraging when it comes to what I choose to do. I guess I do not have a tough life after all, but I’m a young woman and a refugee trying to build my future and help my community during a difficult time in a global pandemic.”

Nabila passed her Tawjihi exams in Jordan successfully and, as her family couldn’t afford to send her to a private university, she decided to look for a job. She did different jobs for a modest pay, but those jobs helped her to discover her passion and where she needed to develop her skills. “My first job was with an educational center, where I had to coordinate trainings for many subjects. I dealt with many people with different personalities, both teachers and students. I was shy and had no experience dealing with the outside world,” she says.

“The experience that totally transformed me was when I joined a local NGO.” Listening all day long to stories of refugees and Jordanians seeking support and protection, as a result of different forms of violence, was what influenced Nabila’s life for many years to come. “Even though the majority were women, children and men suffered from violence too,” she adds. 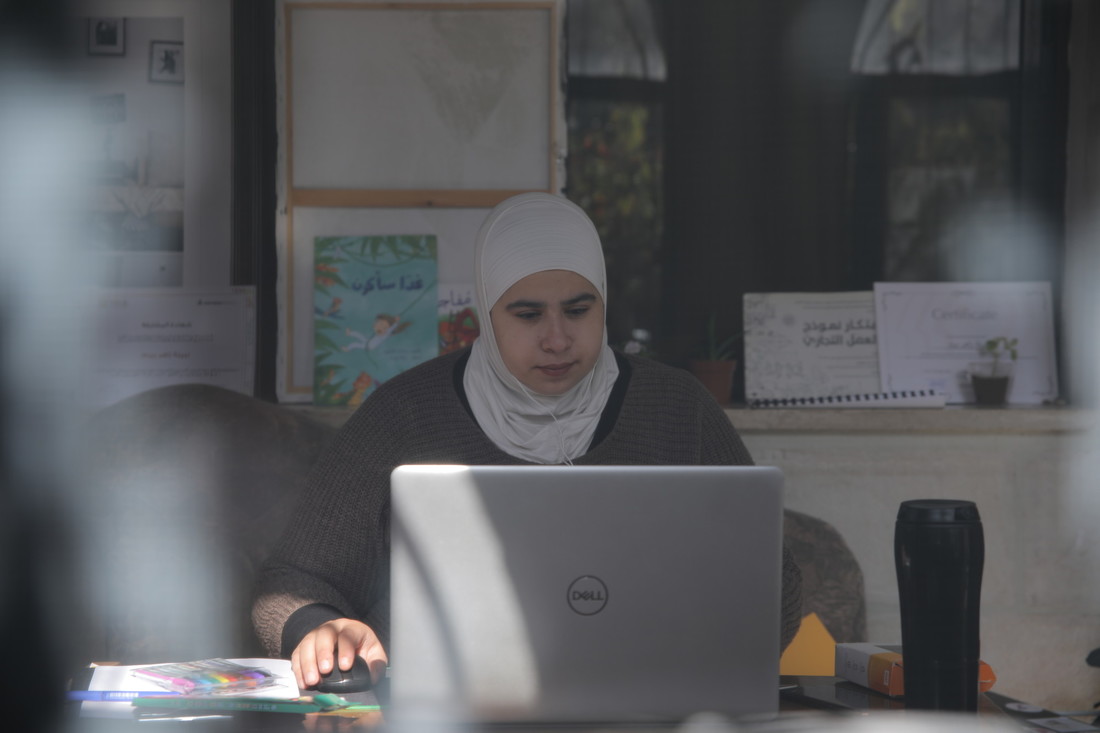 In 2016, Nabila got a scholarship to study business administration and got her diploma, but her passion for working with refugees and women, in particular, didn’t leave her. While there is a certain number of work permits that are issued each year to create job opportunities for Syrian refuges in Jordan, the majority are given to men and women have limited access to the job market, even though many of them are highly educated and are the sole breadwinner of their family. Nabila understood such obstacles for women and youth and worked hard to build a small business to link women and youth with employers.

Nabila kept engaging with her community all along and worked on building her skills through different trainings to be able to advance discussions on gender-based violence and sexual and maternal health in her community. “The moment I started discussing sexual and reproductive health issues in a group of women and men, I felt an incredible power and confidence. Discussing those issues is considered a taboo in my society, especially when done by a young lady. It was liberating and people truly listened.”

“Mothers asked me to talk to their daughters after they attended awareness sessions on early marriage and gender-based violence. For me, that was a step closer to success.”

Dealing with such sensitive issues should be addressed from an early age, according to Nabila, and finding a way to talk about those complex matters in a simple and creative manner was critical to her. “Lectures and awareness sessions get boring sometimes and have limited reach. I thought of animation to help me and others convey our messages, but I had no idea how to do it and no money to produce it,” Nabila explains with a giggle.

The first animation film Nabila produced was done with the help of friends and female volunteers. The film focused on sexual harassment and how to identify and address it at an early stage within the family. 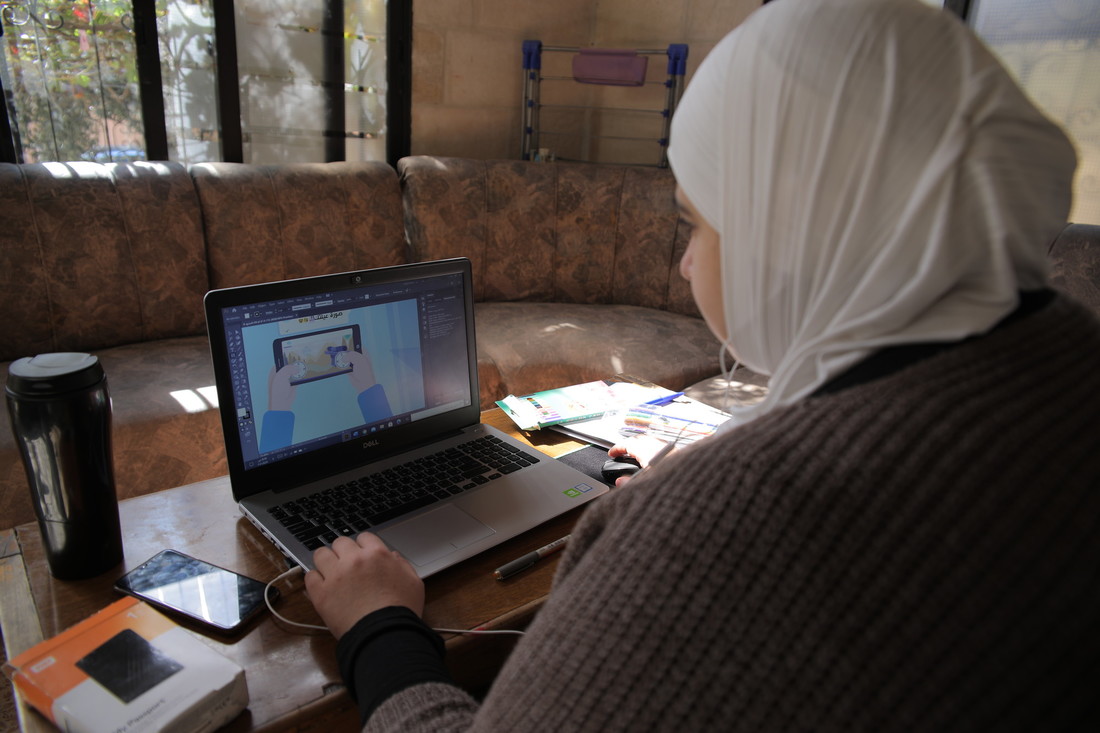 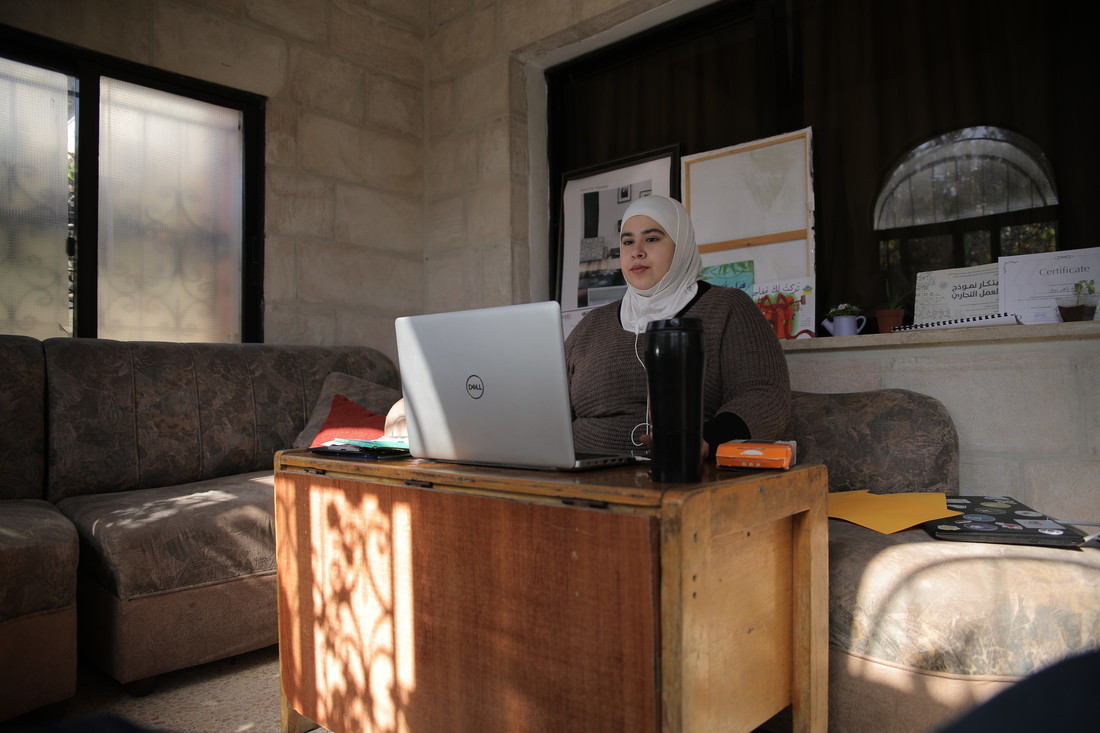 Since her first film, Nabila worked on different films covering topics related to sexual harassment, early marriage and violence. Some of these films were screened in refugee camps and host communities, with more than 150 people watching at times. Nabila managed to get support and funding for her initiatives through different programs by NGOs and UN agencies, in order to continue her work. Some of her films were shown in Europe too.

With CARE’s Community Committees, she was able to create an interactive theatre initiative addressing early marriage and inequality. The show was presented in several locations in Amman. With CARE’s support, she also produced an animated film addressing violence against women. “The idea was to highlight that we are all responsible and that injustice affecting men at early age can lead to further violence against women and girls later on. We have to address violence against children too,” Nabila stresses.

“She is a true advocate; I’m always amazed at how Nabila can handle discussing Gender Based Violence with community leaders and refugees with such confidence and ease. She has the skill to rally people, both men and women, around her cause with great zest,” said Sawsan Saadeh, Director of the Sustainable Development program at CARE in Jordan.

CARE Jordan has been running community committees in different areas in Jordan since 2012 to promote the leadership and engagement of underrepresented communities. The committees are inclusive, diverse and representative of women and men, youth and elders, persons with disability, Jordanians and refugees. Members of the committees are trained in human rights, gender equality, and planning community initiatives. CARE supports the committees both technically and financially to carry out awareness initiatives in the community.

“I want to make films and I want to be active in combating violence and inequality. It has been challenging, since there aren’t many opportunities these days, as a result of COVID-19 consequences on everyone.”

Since the spread of COVID-19 and the ensuing restrictions on gatherings, it was difficult to maintain engagement and interaction with the community, according to Nabila. “These are interactive discussions and trainings and it’s quite challenging and discouraging to do them online.”

Nabila still believes that creative solutions would help her cause in combating gender-based violence and, for that, she has expanded her knowledge and training to direct films. She has again founded a start-up for film productions called “Medilogy”.