Imagine… a life without water

Water is something that many of us in the developed world have the luxury to take for granted. It is available, on tap, hot and cold, 24/7, any given day of the week. But in the countries of Southern Africa affected by the El Niño weather phenomenon it is the difference between eating today or not, between being able to wear clean clothes and wash yourself or not, and, ultimately, between life or death. 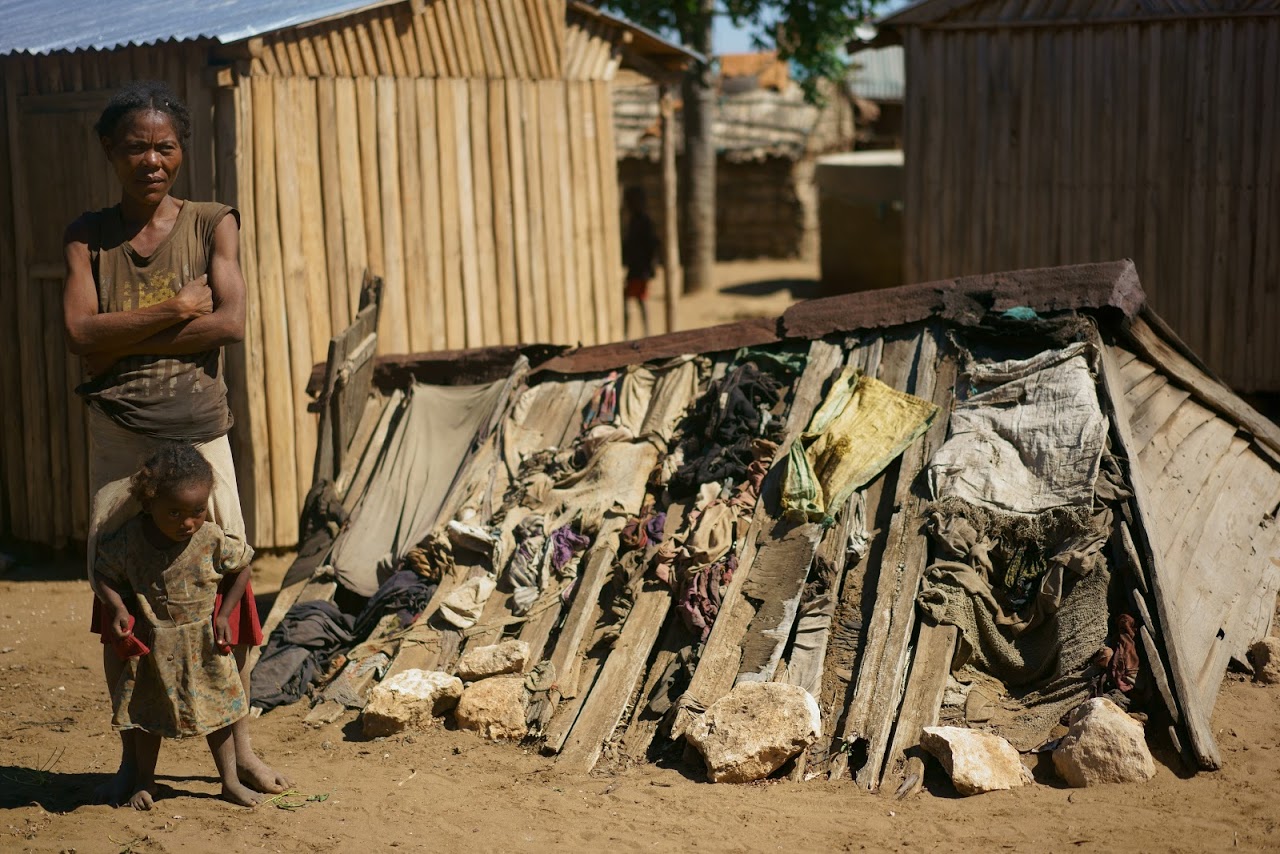 Julienne lives with her daugther in the village of Andranogoa, in Southern Madagascar (Photo: Lucy Beck/CARE)

The people of Andranogoa village in Southern Madagascar have been living in a dry and arid hell for the last year and a half. Throughout 2015 they were unable to harvest anything because of the lack of rain resulting from El Niño, which caused wide scale crop failure in their area. So far 2016 is not looking promising, and without anyway of predicting future weather patterns, they can only pray for rain.

The community relies almost entirely on agriculture to provide food for their families and as their sole source of income. Put simply: without rain water, there are no crops, and without crops there is no food and no money.

Most families in the village long ago finished their stocks of food from the 2014 harvest, and have resorted to eating cassava leaves and the fruits from cactuses that grow locally. Some eat only once a day, others not at all. Single women, without families to support them or their own land, often suffer the most; like 35 year old Julienne, who recently collapsed from hunger after going 3 days without eating anything.

She and her 3 year old daughter Telodoza usually survive through Julienne’s casual labour on other people’s land, but as the crops have dried up so has the work. Julienne’s husband left for the north of the country to find work and she has no other family in the village to help support her. "I worked only one day last month and this month (April) I haven’t worked at all," she says, "we eat only cassava leaves – if I can find them – if not we eat nothing. Yesterday someone gave me a cup of rice, today we haven`t eaten anything,” she adds.

Julienne and her 3 year old daughter, Telodoza, struggle to support with no other family in the village. (Photo: Lucy Beck/CARE)

Less and less to give

Members of the community clubbed together after Julienne and another man in the village both collapsed within days of each other and bought some coffee, sugar and rice for those most in need, but they themselves have less and less to give.

Not only does the lack of rain mean a lack of food, but even water for drinking and washing with is hard to come by these days. Villagers have to walk the 18 kilometres to the nearest town of Amboasary on a daily basis – a four hour roundtrip for the young and fit –to fill buckets of water from the river there. For many of the older residents the trip is too much and they pay others to bring water for them.

Unlike some of the communities in the area, the residents of Andranogoa don’t receive assistance from any aid organisations, and it shows. Other villages in the district have received water irrigation and pumps, as well as hybrid seeds and training on improved farming techniques from CARE and they are managing to weather the impacts of El Niño well; planting, harvesting and saving money for the future. It is a testament to how small initiatives – like the digging of a well, or the setting up of a community savings group – can make all the difference in the face of climate change and natural disaster.

Mara Tare, the village chief of Andranogoa has tried to adopt the practices he has seen in communities working with CARE, such as the Village Savings and Loans Associations (VSLAs), but at this late stage, without crops to sell, there is little for the community to save and borrow and they can only hope that the emergency relief assistance will be extended to them in the coming months. "As a chief,” says Mara, "I am always trying to find ways to improve the community and develop the area, but so far I have not had good results, and I have reached out to organisations to try and get assistance.”