A roof for my family 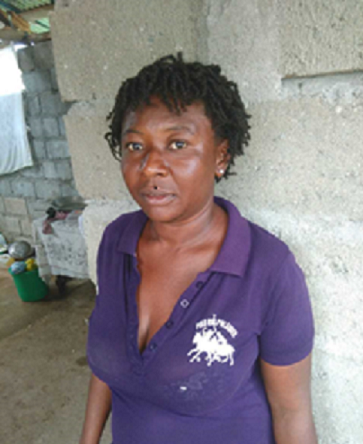 "Thanks for giving me a roof to shelter my three (3) children and myself”.

This is how Vesta Jean Jacques began to tell us about her experience with the shelter project implemented in Grande Anse following the hurricane Matthew with the support of Walmart.

Aged 35, Vesta is a single mother of 3 and she lives in Nivrée, a small locality in downtown Roseaux, commune of Grande Anse. “In the aftermath of hurricane Matthew, I took refuge with my children at my sister’s place because I lost almost everything”, she explained.

She goes on to say that at first, her sister was very kind to her but later on, her attitude began to change. “She sought many excuses to kick me out. One day, because there was a bickering between one of my daughters and hers, she asked me to leave her house, because two adults cannot live under the same roof. I was very disappointed, I did not think she could go that far”, continued Vesta. Left without options, she had no choice than to leave and seek for a refuge, her and her children at her brother’s home.

Since this disillusionment, she started looking for wood to repair the roof of her house.

Shortly after moving to her brother's house, Vesta was asked to leave for the same reason mentioned above by her sister. “It felt like the sky had fallen over my head. This was a very difficult time in my life because I did not have anywhere else to go with the kids”, Vesta said.

“A few days later, while I was preparing to leave my brother's house without a specific destination; an Agent from CARE invited me to attend an awareness session. When I arrived, we were informed that shelter kits will be distributed and that they should not be sold as they are intended to repair damaged homes. This news gave me an immense joy because I started to see the light at the end of the tunnel”, explained Vesta.

“On the day of the distribution, I received a shelter kit with iron sheets, nails, cord, straps... and a tool kit with scissors, saw, hammer, pickaxe ... to use with a neighbor. I quickly used the kits to repair my house. Today, it is true that the sheets were not enough to cover my entire house, but I was able to repair a room to shelter my family from the sun and rain.

This project allowed me to settle down again and gave me back my dignity. I can now focus on other things; including setting up an income generating activity to buy the remaining materials to completely repair my house and take care of my children”, muttered Vesta with a voice full of hope and assurance.

Vesta Jean Jacques is one among many single mothers in Moron and Roseaux that the shelter project supported by Walmart has given the opportunity to rehabilitate the roof of their homes and has provided peace of mind to cope with the past, engage in the present and believe in the future. In total, 800 beneficiaries have received shelter kits and 399 tools kits that have been shared with one neighbor to repair their home.