10 years after Somalia famine, country is once again on the brink of crisis with women and girls hardest hit 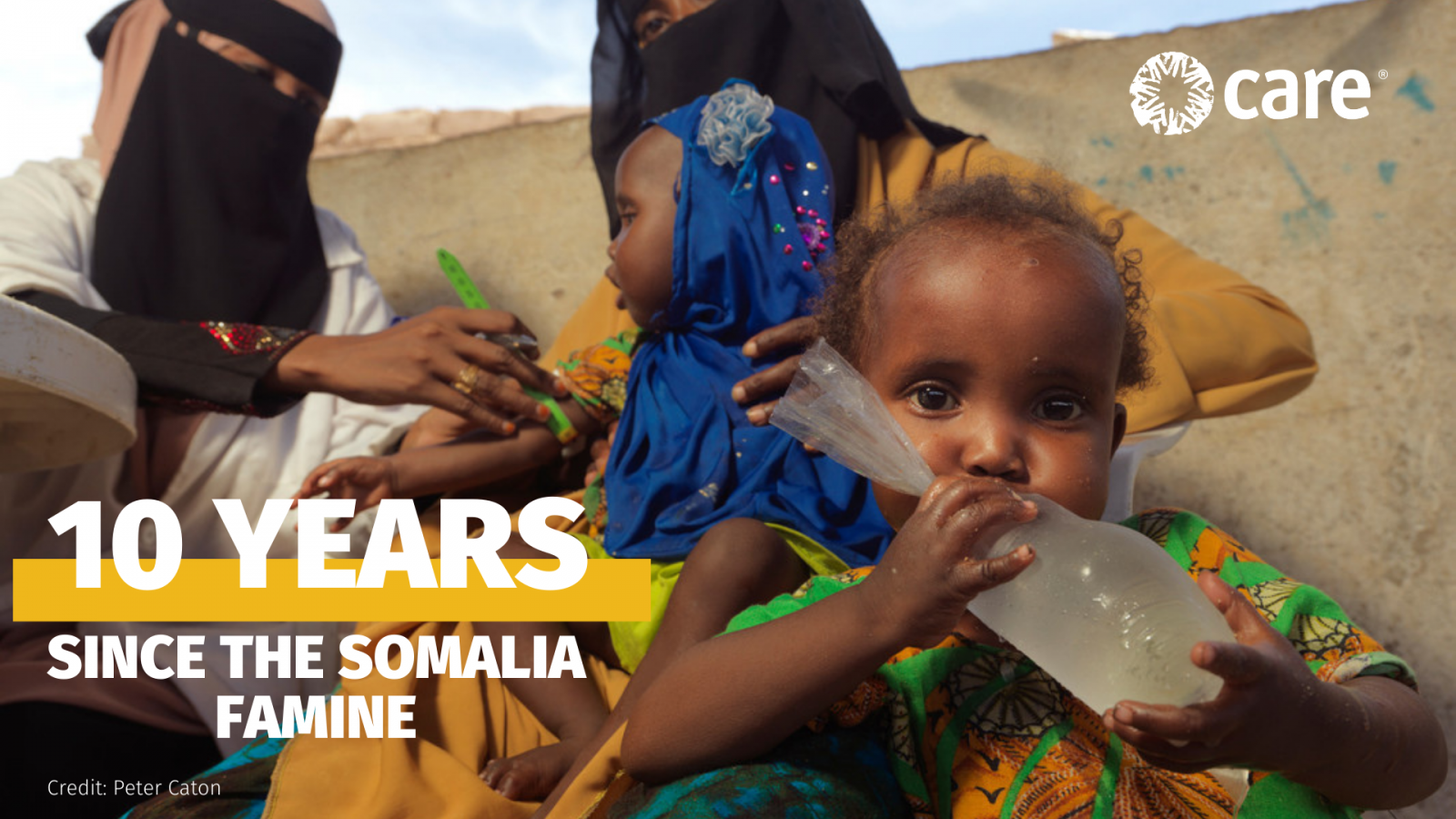 Rahmo and her children were being treated at a CARE's nutrition center as a part of CARE Drought Response program in Somalia in 2017. Credit: Peter Caton/ CARE USA.

Mogadishu: As Somalia commemorates 10 years since the last devastating famine in 2011, a new CARE survey of over 2,000 people in the country finds that women and girls still remain amongst those most affected by the current hunger crisis, and there is a risk of all the gains attained in previous years being lost if funding is not urgently increased and prioritized for local, women-led organizations.

The CARE survey – carried out across five different administrative regions of Somalia in the second quarter of 2021 - shows that 77.5% of communities reported that ongoing drought was their biggest challenge, closely followed by COVID-19 (identified by 72%).

Somalia is currently undergoing drought conditions which have increased the burden on women and girls, this comes at a time when funding is at the lowest level in six years. Severe water shortages in some parts of the country have resulted in women having to walk long distances to access water and girls dropping out of school as their families can no longer afford to pay school fees.

Since the 2011 famine, funding in Somalia has steadily decreased from $1,386.8 million in 2011 to the current $558.2million*. According to the UN, if funding is not increased, hunger will continue to rise and one million people will not receive monthly food assistance whilst over 205,500 people, including children, will not be able to access protection services including clinical management of rape and psychosocial support to survivors of gender-based violence.

The CARE survey also showed that entrenched gender norms continue to prevail in Somali society, with only 27% of the female-headed households surveyed having received any form of formal education (compared to 41% of men). It also highlights the inequalities that persist in gendered roles with over 60% of men and women surveyed responding that certain types of jobs such as nursing and cooking should only be carried out by women and that women cannot be strong community leaders.

“A lot of effort has been put in bridging the gender gap in the country over the last 10 years, but more effort is needed, as shown by our recent assessment. Women remain at the receiving end of the hardships being faced, not only has COVID-19 resulted in women having to step up and provide for their families but the drought conditions have also led to an increase in girls dropping out of school. We are calling for funding to be increased and prioritized for local, women led organizations to bridge the gender gap and protect women.

Stakeholders should act now so that we safeguard the gains we had made in the previous years, failure to do so will only lead to a repeat of the 2011 famine.

While successes have been made in the past 10 years in terms of improving access for girls to education and decision making at a household level, we still have much more to do, especially in making sure women are involved in decision making at community level and making sure their voices are heard and reflected.”

Founded in 1945, CARE is a leading humanitarian organization fighting global poverty. CARE has more than seven decades of experience helping people prepare for disasters, providing lifesaving assistance when a crisis hits, and helping communities recover after the emergency has passed. CARE places special focus on women and children, who are often disproportionately affected by disasters. To learn more, visit www.care-international.org. In Somalia, CARE is committed to advancing gender equality through its development and humanitarian programs. The programs are tailor-made to discourage negative cultural norms whilst promoting equality.